December with the Doctor: The (Stair)Master

Okay, I'm as excited about "The End of Time" as anyone. I'm really looking forward to David Tennant's last go-round as the Doctor, some more quality time with the Nobles (and hopefully a less depressing end for Donna), and even the return of the Master. I really enjoyed John Simm's take on the character, and I wonder if they'll be regenerating a new version for Matt Smith.

But while some of the latest promo shots have been intriguing and impressive, and while the trailer has me counting down the days, I can't help but be a little underwhelmed by this image: 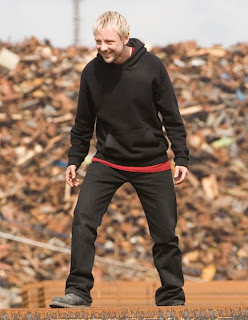 This doesn't feel like the Master, the menacing villain who traveled from the end of time to conquer Earth with an army of decapitated humans. This doesn't feel like the Master, the megalomaniacal sociopath who once destroyed a sizable portion of the universe. This feels like the Master, a guy who just got done with his Saturday morning jog and is now contemplating breakfast at a coffee shop. This is the Master who has had a bit of a stomach bug the last few days, and so he's using another sick day and just kind of lounging around in sweats. In "The Waters of Mars," we saw the Doctor as the Time Lord Triumphant, it looks as though "The End of Time" will be giving us The Master Unemployed.

I'm still excited about the next episodes, and all, but really...a hoodie?


Edit: Forgot to mention: photo courtesy of Blogtor Who.
Posted by Tom Foss at 10:57 AM

Labels: December with the Doctor, Doctor Who, TV

Are we sure that's not just John Simm out of costume?

Yeah, that's definitely the costume he's wearing in the trailers and all the promo shots. I suspect, based on a shot in the promo where his skin is flickering, that they're going for something similar to "The Deadly Assassin," where he's out of lives and so forth. There, he looked like a corpse in a hooded robe, now he looks like a guy with a serious flesh transparency issue in a hoodie.

But we won't really know 'til Christmas.