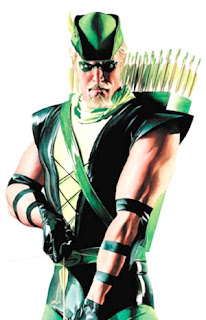 I recently sold off my collection of Green Arrow comics, which, to be honest, wasn't all that many. I started reading the series because I was a teenager and Kevin Smith was teh awesome, and frankly, I think his two arcs--plus the Meltzer follow-up--were pretty good comics. They certainly paved the way for Ollie to become a powerhouse character with a fairly consistently-running series, which is more than can be said for a lot of otherwise good characters.

I liked Green Arrow as a kid, though I didn't have many comics with him. I've mentioned a few times that I grew up reading a stack of my mom's old World's Finests and Adventure Comics and so forth, and Green Arrow featured occasionally in those. Mostly it was the full-on Batman ripoff era, pre-beard, when he drove the Arrowcar and had an Arrowcave (and led me to think that every superhero except Superman had their own eponymous car and cave hideout). I know there was a Neal Adams-era Ollie in one of the Super-Sons issues, so I was definitely exposed to both. Admittedly, while I prefer the Adams costume, I'm an awfully big fan of the trick arrows. I don't care that they're not aerodynamic; they're awesome.

I don't often talk politics on this blog; I have another space for that. Suffice it to say that I'm a dyed-in-the-wool left-wing liberal hippie whatever. Recent less-than-stellar political events, like the one I thrust Superman and Green Arrow into a few days back have got me thinking about politics and comics, though, and have given me a revelation about Oliver Queen.

Green Arrow should be the liberal Punisher.

Now, when I say this, I don't mean that he should be going around killing Tea Partiers and polluters. I mean it in a more abstract way: the Punisher is a 'swift justice' wish fulfillment character, who goes after the sort of everyday criminals that we all occasionally think ought to just be weeded out entirely, and he does that. He skips the whole due process and fair trial issues and, with a pure certainty, plays judge, jury, and executioner. It's the same kind of wish fulfillment that we look for in shows like "Dexter;" we want someone to do the dirty work that we're unwilling to do ourselves.

Of course, there are good reasons that we're unwilling to do that dirty work, all centered around certainties that exist only in fictional settings and complications that don't. We can accept the Punisher's actions because we know he's right about the people he dispatches, because that's how the stories are written. Real life is messier. So, while the Punisher goes after mob bosses and drug dealers and arms dealers, there's really no one exerting that same swift justice on the corrupt business owners or cronyist politicians or dirty lobbyists or any of the other standard villains of a liberal tirade. And that's what I'd like to see from Green Arrow.

Here's the pitch: Ollie realizes that, after years of being involved in politics and living as a billionaire again, he's grown distant from the causes he used to champion. Realizing that voting and speaking out simply aren't enough these days, not when one side refuses to play fair and the other side rolls over at the slightest pressure, he sets out on a one-man cross-country campaign to set things right. Between his skills and his resources, he decides to become a real-life Robin Hood once more, a nobleman by birth who sides with the common man, fighting the battles that they can't, stealing from the rich and giving to the poor. He sets up a social networking page where fans and followers can suggest what problems are affecting them, and he'll put his brand of non-lethal justice to bear on those who would oppress and exploit the powerless. And so he rides his Arrowcycle out from Star City, driving where the Internet and his sense of justice take him, with his sights ultimately set on Washington, DC.

I think, given that, the rest of the story writes itself. The philosophical complications are obvious: Ollie is not perfect by any means, and his brash, hot-headed approach may result in complications he hasn't foreseen. Besides that, he has to deal with the ramifications that his actions will have after he leaves, and he's going to find that there are lots of problems that can't be solved with boxing glove arrows. He's also going to make a lot of powerful enemies, not to mention his normal cadre of enemies who would be all too willing to seek him out--or to use his new web presence to lure him into traps. Meanwhile, a lot of his allies aren't exactly thrilled with his newfound political crusade, and while they may confront him, he's perfectly willing to take them to task for their own apparent moral failings.

Is it a bit like "Grounded"? Sure. But the problem with "Grounded" isn't in the idea of a superhero going walkabout, isn't in the idea of an out-of-touch superhero getting back to his roots and ideals, and isn't necessarily in the idea of a superhero dealing with real-world issues. The "Hard-Traveling Heroes" arc of Green Lantern/Green Arrow did all that, to varying degrees of success, and is fondly remembered because of it. The problem with "Grounded" is in the idea that Superman fits into that mold, and in the smug, self-assured way that it was executed. The story I'm proposing would be exactly as tedious if it had the self-assured self-righteousness that "Grounded" exuded in those early issues, where even though Superman was an asshole, we knew that the writer wanted us to think he was totally right and profound. Of course, the flipside point is that Ollie thinks he's absolutely right, and has to be confronted with the reality that he often isn't. And Ollie has the kind of smug self-assured attitude that can work in that sort of story; not so much with Superman.

There's also the point to be made that, what with executing Prometheus, hiding out in the woods, and allowing his allies to torture supervillains, he kind of has lost his idealistic principles. There would be an actual in-story justification for his need to reacquaint himself with his politics.

So Ollie Queen finally lives up to his Robin Hood-style costume, finds a way to reconcile his wealth and his politics, and sets off on a cross-country tour that can weave in and out of the mainstream DCU seamlessly, dealing both with relevant social commentary and over-the-top superhero action. It can function as an ongoing overarching theme, as a finite story (with Washington, DC as the endpoint), or some combination of both.

I'd read that. It sounds like just what the character needs.

I've been reading GA since the '60s, pre-poverty and beard era, through the Hard Traveling Heroes, and into the present, and the Ollie as written by Denny O'Neill is my favorite era. There were times when lesser writers just made him a jerk, but with the right writers, he had heart. He had a soul. He was arrogant and righteous and made people believe things could be better. I miss that Ollie.

Then again, he's in a better situation now than his former ward. I hate what they've done with Roy. He's dead to me now. Ollie still can be redeemed. I'm not sure Roy can.