Chucky, It, and the Translation of Nostalgic Horror

There's a new "Child's Play" movie out. I'll start by saying that, despite being a big fan of slasher movies, I've never actually watched any of the "Child's Play" franchise. Even though it somehow managed to outlast "Nightmare on Elm Street," "Friday the 13th," and "Halloween" without rebooting, I've just never taken the plunge. So keep that in mind as I talk about this stuff from a complete outsider perspective.

With that out of the way, here's the new Chucky.

I've seen a few different pictures of the updated doll, with varying degrees of uncanny valley-ness and similarities to the old version, largely depending on the lighting, but they all make one thing pretty clear: this is the same basic doll from 1988, but a little sleeker and slimmer. 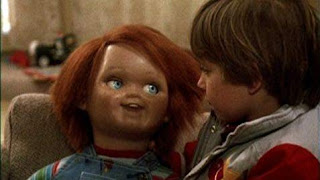 The thing I appreciate about that is that they haven't gone the same route as "It" and "Annabelle," making their titular creatures look actively creepy, which eliminates the surprise and scare factor of having something innocuous and commonplace made scary by doing scary things. Which is good, because that seems to me to be the whole point of "Child's Play" and the larger "killer doll" genre as concepts. 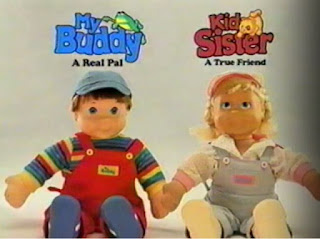 But I see a related problem here: Chucky isn't commonplace anymore. The original Chucky doll was styled after the My Buddy and Cabbage Patch Kids dolls that were incredibly common in the mid-80s. I remember the My Buddy commercial, and the only reason I never got the Cabbage Patch Kid doll that I wanted for like a week when I was four is that my mom thought they looked ugly. But today? Sure, the thirty-year nostalgia cycle has brought Cabbage Patch Kids and Teddy Ruxpin back to big box store shelves, but the new Chucky has ditched the Cabbage Patch cheeks and chin, leaving only the slightly-updated My Buddy elements that look like nothing on the shelves today.

If you wanted to do "Child's Play" in 2019, the place to start isn't by putting a fresh coat of paint on the original film, it's by cracking open the movie and getting to the core concept: a toy that looks disturbingly like ones that children love comes to life and murders people. My generation had Chucky, my parents' generation had Talky Tina. And I've seen enough of my mom's old dolls to know that Talky Tina looked a lot like what little girls were playing with in 1963.

As someone who spends a not insignificant amount of time browsing toy aisles, I think your best basis for a modern "Child's Play" would be some kind of blind-box toy, like Hatchimals or LOL Surprise or other things I see advertised when I watch "Teen Titans Go!" like I did this morning. If you want to go the doll route, I think options are a little limited by the domination of multimedia franchises, your DC Superhero Girls and Barbies and Disney Princesses. I assume Monster High and My Little Pony still hold a decent share of the willowy wide-eyed doll market, which NuChucky seems to be leaning into facially, if not in any other aspect. I suppose you could also do something closer to the American Girl dolls, which would have a closer look and size to the original Chucky, even if they'd require some other changes.

It's similar to some of the problems with 2017's "It." It's all well and good to want to move the children's section from the 1950s to the 1980s, but that transition doesn't work without making other alterations, so that the story concept—in particular, the aspects that make it scary—fit in the new cultural context you've transplanted the story into. In 1958, "clown" meant Bozo and Red Skelton and Barnum & Bailey. In 1985, "clown" meant John Wayne Gacy and "Poltergeist." In a lot of ways, It as a novel tracks how clowns lost their innocence just as the protagonists did.

Pennywise works in the It novel and original miniseries because it's familiar. It's somewhat believable that Georgie Denbrough would see a friendly clown and strike up a conversation with it in 1958. That's a lot less believable in the Stranger Danger 1980s, where even aside from the fear of child kidnappings (something the new movie did incorporate into the update) clowns were viewed with a much greater level of suspicion and fear.

If you wanted Pennywise to be something friendly and familiar in a 1988 setting, you'd either make him a cartoon character with heavy merchandising, or you'd make him a Muppet. I suppose he could be a Mister Rogers/Captain Kangaroo/LeVar Burton-style children's TV host, but I think that would require more significant changes to the story structure. Though playing on some of the more salacious urban legends about characters like Barney the Dinosaur and Fred Rogers could make for very interesting horror.

Similarly, in the novel, Eddie Kaspbrak is a hypochondriac and germophobe, so to terrify him in 1958, Pennywise takes the form of a "leper"—who's later determined to be a syphilitic hobo. The recent movie keeps this scene intact (though losing a lot of what gave it context), but as someone who was a kid in the '80s, syphilitic hobos weren't exactly commonplace fears. Instead, D.A.R.E. and urban myth and TV drilled into me a fear of "junkies" and AIDS even in the rural midwestern towns where I grew up. It's especially galling because there is a thematic thread of homophobia and the AIDS epidemic running through the 1980s segments of the It novel, so it wouldn't have been a whole-cloth invention either.

The problem here is one of transliteration rather than translation. When converting a text from one language to another, you can try to do a one-to-one, word-by-word literal transliteration, but in doing so, it's likely that you'll lose some of the meaning. On the other hand, you can try to capture the intended meaning and connotation, but may have to be a little less literal in your word selection. The balance between these two approaches is part of why there's so many different modern English versions of texts like Beowulf and The Odyssey that were written in (effectively) different languages. It's why there's a current furor among Internet man-children that Square Enix censors shrunk Tifa's breasts in the new Final Fantasy VII remake.

I think a similar issue plagues these nostalgic horror movies. They try to update only the setting and aesthetics without realizing how integral those things are to the story and the scares. The result is a warmed-over remake that doesn't pack the same punch as the original because it's tapped into fears from thirty years ago instead of current fears.

And it's not hard to see why this would happen. If you remade "Child's Play" to be about an American Girl-style doll, you'd end up alienating the Chucky fans and creating immediate bad press from the people most likely to pay for a ticket. And I'm sure the copyright holders and corporate powers are in play here: Chucky is a known quantity with merchandising possibilities and brand recognition, and especially in the current Hollywood economy, I can't imagine many of the pursestring-holders ditching that for a less recognizable main character.

I'm not one of the doom-and-gloom types who decries the current state of Hollywood as relying exclusively on adaptations, sequels, and reboots. Frankly, I think that's always been true of Hollywood to one degree or another. But it's true that Hollywood is increasingly dominated by a few large media corporations, and that the economics of moviemaking and theaters in general mean that there's even less willingness to branch out and take risks. And that is a pretty distressing state of affairs, and not just for horror.

"Child's Play" and It weren't made to fit some nostalgic idea of what they should be. They were made to comment and capitalize on issues and anxieties of a particular culture at a particular moment in time, and that's what made them memorable and effective as horror. You can no more sever a story from its context and setting and expect it to work in a new one than you can transplant a heart from one body to another without reconnecting any of the vessels. If you don't connect your story to the rest of the setting, you're going to end up with a bloody, lifeless mess.
Posted by Tom Foss at 10:37 AM