Once upon a time, just a little over nine years ago, I started a little series examining the different versions of Superman's origin story, in publication order, on this blog. That series petered out after nine entries, halfway through George Lowther's 1942 novel, The Adventures of Superman. There's half of an entry finishing off that novel's origin story in my drafts from...*cough* 2011.

Since then, we've had a bunch more Superman origin stories, including flashback sequences in "Man of Steel (vol. 2)" and the current "Superman: Year One." And I'd like to dive back into the Superman origin waters.

But I'm older and wiser now, and I realize that I made some avoidable mistakes. Chief among them being that I tried to stick to the origins in chronological order. I think there's value to that, in seeing how the myth evolved over time, but it also means spending a lot of time tracking down hard-to-find Golden Age and Silver Age sources. I really dig Golden and Silver Age comics, but I also know there were versions of Superman's origin told in the gap between 1961 and 1978 in that old master list, and I haven't found any clear indication of where they were.

So I'm going to play hopscotch through the decades, covering Superman origins as I encounter them, and focusing on the key elements that carry over from version to version, as well as the interesting deviations. I can't promise a regular schedule or fascinating writing, but I'm going to try. Blogging may be a dying art, but I'm not ready to close the Fortress door just yet, and this is an easy way to have some consistent content that I can't just dump in the whirlpool of social media.

Besides, I made a logo: 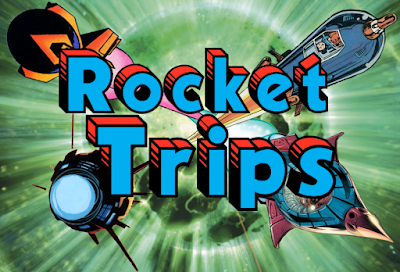 I hope you enjoy coming on this journey with me! The first installment will post later today!
Posted by Tom Foss at 10:25 AM

huzzah! looking forward to this tom!