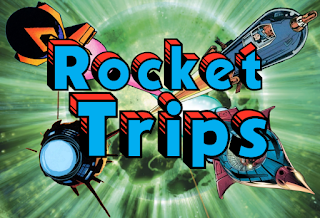 Well, we had to start somewhere. Action Comics (vol. 1) #1 contains the first (canonical, comic book) appearance of Superman and starts with a one-page opening sequence that remains a marvel of condensed storytelling. I covered it in some detail way back when. 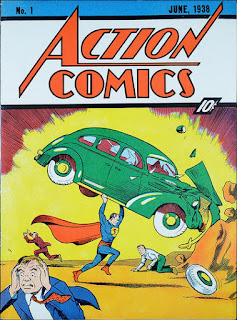 Key Elements: A distant world is dying. A scientist places his infant son in a "hastily-devised space-ship" and launches it toward Earth. The baby is discovered by a passing motorist and taken to an orphanage. The child has superhuman strength, and his powers of strength, speed, and invulnerability grow as he reaches maturity. He uses his powers to "benefit mankind" and becomes Superman, the champion of the oppressed.

Interesting Deviations: This is the first origin, so it can't really deviate from anything, but eighty-two years of hindsight allow us to see how much is missing, and what's included instead. There's no mention of Superman's birth mother, no mention of Ma & Pa Kent, no names for any of the sci-fi elements at all. Instead of the Kents, there's a passing motorist and an orphanage. Superman's powers are credited to an advanced physical structure and likened to the abilities of ants and grasshoppers. His powers are said to grow when he gets older, which sticks around a little in the Golden Age but then disappears until the Byrne reboot.

Additional Commentary: Can we trade out "Man of Tomorrow" for "Champion of the Oppressed" as a moniker for Superman? That's one that really needs to make a comeback.

The Rocket: Not much to look at, really. Just your average bright-red Amazing Stories sci-fi rocket. 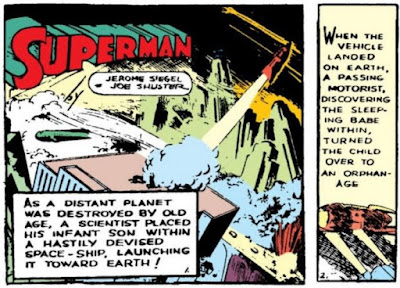 I give this rocket two out of five exploding Kryptons.