Buddy Baker, shut that door! Were you born in a barn? 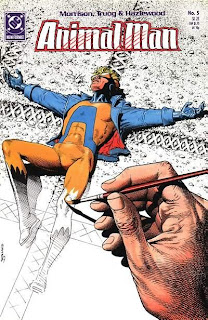 Sometimes, I wonder if comics fans have ever actually read comics. Let's look at the circumstances of Buddy's recent 'demise,' shall we? Buddy gets shot, and eventually starts foaming at the mouth and sweating. In the meantime, he talks about how the universe likes him, points at the audience to continue a motif, and is exhorted by Adam Strange to use his powers.

His powers...to use the morphogenetic field of the universe--The Red--to draw on the natural abilities of pretty much any life form, extant or extinct. Life forms such as, oh, I don't know, Czarnians? Who can regenerate from any injury? Who can grow an entire body from a single drop of blood? Those life forms?

But, that's really only if Buddy's story in 52 isn't quite over yet, and I suspect that it isn't. Even if that's not the case, Buddy's 'demise' leaves open the biggest back door in the history of comic book death. In fact, I'm starting to feel a draft just thinking about it.

Animal Man is an elemental, with the ability to tap into and control the Red, a life-generated field similar to the Green. Because of his connection to the Green, Swamp Thing is not tied to a single body. He can create a new body out of existing plant matter pretty much anywhere that plants grow. His consciousness exists independently as a mobile energy force. Now, correct me if I'm wrong because I haven't read the issues in question, but some time after Morrison's run, doesn't Buddy go on a little world tour through the minds and bodies of a variety of animals, using the same principle?

I mean, even if Buddy's meant to be dead as a doornail for the remainder of 52, it would be cake to bring him back. It wouldn't even really count as a retcon, it wouldn't seem contrived, it'd just be the natural extension of Buddy's godlike abilities.

But honestly, the last time a character was apparently dead in 52, he showed up this issue ready to go to Nanda Parbat. Very little is as it seems in this series. Why should Buddy's fourth-wall-breaking death scene be any different?

Of course Buddy can't die. We haven't finished finding out about his many origins yet.

And besides, I think Grant may still be writing him. And, y'know...me.

You know, I really thought that Buddy was toast. *sniff*, and then you gave me some hope. And yes, I've been reading comics for 30 years, and am STILL naive.

Animal is a new character for me, essentially, so I don't know all these nuances. It's been a long time since I'd followed Adam Strange with any regularity, either. And that 10 year gap (1985-1995, except Titans, which I stopped reading in 1991) left me out of the loop for a lot of characters and developments in the DCU. I missed a lot of retconning, the whole Hal as Parallax thing, etc.

I hope Buddy's not dead. That means there's still a chance the big death we're to expect is Kory.

Uh, that should be Animal MAN. Geez, I wish we could edit comments here. I would've deleted it and redone it, but this is easier. *sigh*