So, everyone remembers the inciting incident of Civil War, right? The young heroes of the New Warriors face off against Nitro, but find themselves totally outclassed. As a result, innocent people are killed. They're criticized after the fact for not calling in the Avengers or some other team more suited to handling Nitro's threat.

Well, for fun, I've been reading through the old Acts of Vengeance storyline (another major Marvel crossover featuring a super-powers registration act), and I came across the New Warriors' first appearance as a team in Thor #412. It's eerie how similar this panel felt to those criticisms: 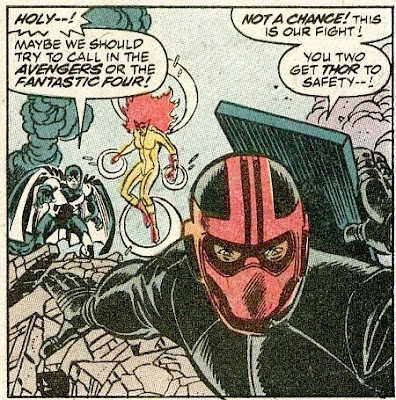 Here, in their first battle as a super-team, they've also found themselves outclassed. Marvel Boy's suggestion is unheeded by Night Thrasher, who goes a little over the edge a few pages later. The brash, young, inexperienced team rushes in to do battle with a stronger opponent, with little regard to reason or their own abilities. What opponent could this be, you wonder? After all, if the seasoned veterans of the 2006 New Warriors team could be outclassed by C-lister Nitro, this must be Armadillo or the Mandrill or at best a member of the Wrecking Crew. 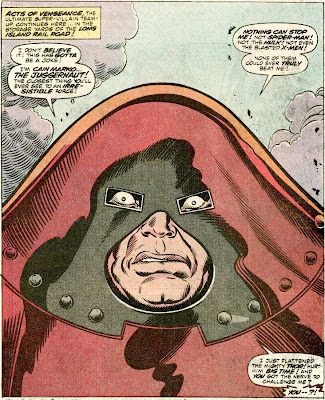 The Unstoppable Juggernaut, who just wiped the floor with Thor.
Yeah, they were outclassed. Seriously outclassed. Freakin' Thor was outclassed. But this is the Juggernaut here, and this is their first outing, not a routine ambush after years of fighting Juggernaut-scale foes. If you ever needed another reason why the opening scenes of Civil War are ridiculous, I present to you Thor #412: the type of villain who outclasses the New Warriors.

So... Night Thrasher's weapon of choice is a two-by-four he keeps strapped to his back?

Do you think he had to Register, or did they just tell him to go home and stop beatin' on folks with bits of wood?

Well, technically that two-by-four is a skateboard, though you wouldn't know it by that poorly-drawn shape.

And somehow I think Night Thrasher was exempt from registration, seeing as how he died when Nitro's head a splode.

The New Warriors ineffectually attacked Juggernaut, who didn't really seem to notice. The culmination of their attack was throwing two boxcars at him, which didn't faze him in the least. By this point, though, Thor had awakened again, and he tried all manner of ways to stop Juggy. Thor even unleashed the god-force, in conjunction with the "irresistible power of mine enchanted Uru mallet," but all it did was push Juggernaut backwards a little.

Where he promptly fell through the concrete foundation of the construction site where the battle took place. The New Warriors threw a bunch of steel girders down with him, Firestar melted them, Thor cooled them with "a frigid wind," and then he levitated the coccooned Juggernaut out of the hole and used his hammer to banish him to another dimension.

So, it ended up being more or less a win by default, and a "thank god no one got seriously hurt."