Why I love comics

So a couple of days ago, I picked up the Essential Official Handbook of the Marvel Universe: '89 Update Vol. 1 (phew!). As I flipped through, I came across a description of one of my favorite villains, a character whose backstory features so many ridiculous excesses stacked on top of each other that he ends up encompassing nearly all that is awesome about comic books.

Of course, I'm talking about Swarm. 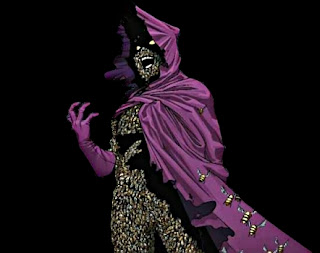 I knew Swarm was awesome prior to reading that bio. I mean, he's a Nazi who happens to be made of bees. But as I read the capsulized backstory out loud to a couple of friends, I realized that he was far more than just a honey-producing stormtrooper. No, Fritz von Meyer was a Nazi scientist who discovered in the South American jungles a giant hive of hyperintelligent mutant bees that had been exposed to radiation from a meteorite. While he tried to find a way to control them as part of his plan for world domination, the bees consumed his body and absorbed into them his essence. The psionically-linked bees organizes themselves around von Meyer's irradiated skeleton, and he used his complete control over his insect body to don a purple cape and battle superheroes.

A megalomaniacal Nazi supervillain made of hyperintelligent telepathic jungle-dwelling bees, mutated from exposure to alien meteorite radiation. That might be the most awesome thing in comics.

He's so awesome that, in a book that presents detailed schematics for Cyclops's visor and Nomad's stun-discs, no explanation is necessary for why a man made of bees nonetheless has glowing red eyes and normal teeth.
Posted by Tom Foss at 5:01 AM

Its a skeleton covered in bees. So um..skeletons can have teeth. And er..radiation bees glow?

I think the most recent "Marvel Universe" book said that his eyes are yellow because they're pools of honey. Doesn't explain why they're sometimes shown as red, but having honey eyes is all kind of awesome.