An Editorial Mistake I Can Forgive

I've been catching up on "Booster Gold" for the last couple of days, it being one of several comic series that I buy but haven't actually read in months, and along the way I came across an interesting editorial error to add to the list. No, it wasn't how Booster cryptically referred to the Perforated Man as "PF" in one word bubble, suggesting an abbreviation in the script that should have been changed for the finished page (or a typo, though when he later calls the guy "P.M.," it seems like it would have been a hell of a typo), it was this bit of signage:

From the context and the following panels, it's clear that this is meant to be the 30th Century version of Sundollar, DC's clever ersatz Starbucks. But if you're the sort of sad, strange person who can kind of, sort of read Interlac (like me), you might notice something strange about this sign. You might have the sneaking suspicion that "sundollar" would be rendered thusly:

Assuming, of course, that we ignore the differences between capital and lowercase letters. Either way, if the bottom image correctly renders "sundollar," then what does the top image say?

"Sunflower." Which means, I suspect, that letterer John J. Hill could have the nerdiest entry to Damn You, Auto Correct ever.

On one hand, this is forgivable. It's a small error in a made-up foreign language with almost no bearing on the plot or issue. On the other hand, I would hope that the foreign language bits are the places where editors are keeping the closest watch, since they would make it easy for all manner of errors, slurs, and blue placeholder text, to slip through.

The backwards cover preview on the letters page--which would be totally unnoticable if not for the moderately recognizable S-shield on the left--is less forgivable. 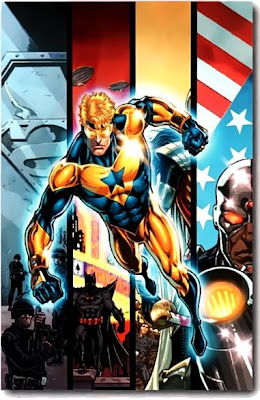