I just read the new original story in "DC Retroactive: JLA - The '70s," and it stands out as one of the best straight-up old-school comic stories I've read in awhile. I know the pendulum has swung and the media has progressed, but I really would like to see more of this kind of thing. Which is part of why I'm glad I asked my shop to pull all the Retro-Active specials, painful though it may be to my wallet. It also makes me really excited to sit down and read the Superman one later tonight, in all likelihood.
Apparently today was Mark Waid day, because another trip to the sadly terminal Borders saw me walking out with the latest two volumes of "Irredeemable" and "Captain America: Man Out Of Time." After seeing the film of the latter, I've been in the mood for some more good Cap stories (and if I'd been paid anytime recently, I would have picked up Brubaker's "Red Menace" trade too), and I've never heard a bad word associated with Mark Waid's Captain America. I've got an "Operation: Rebirth" trade around here someplace that I've never managed to read, so there's a good chance I'll be hitting that soon as well.
My other attempts to locate good Captain America stories have been somewhat mixed. I picked up the first (or 620th) issue of "Captain America & Bucky," and enjoyed it well enough. It's WWII-era, which I like to see, but I would have liked a little more Captain America and Bucky in it. I'll stick around for the first arc or so, but I'm not sure after that. I've liked every bit of Brubaker's Cap comics that I've read, but I've never gone the extra step of continuing with the series. It's partially the way Marvel organizes their trades without a clear progression from one to the next; I understand the reasons for doing that, and I saw in "Red Menace" today that there was a handy guide on the inside cover, but it does make things slightly less impulse-buy-friendly for the story continuity-minded among us. It's also part of why I've bought so little in the way of Brand New Day-era Spider-Man trades; a lack of numbers and a plethora of trades makes it unclear where I should go next without additional research that I'd rather not do.

Which, I suppose, makes me lazy. Or cheap. Or searching for an excuse. I can handle all that, I guess.
I tried to find "The Adventures of Captain America: Sentinel of Liberty" at my local shop, since I'd heard good things about it and since I'm always up for Kevin Maguire art, but there seems to be no trade, and my LCS only had the first issue. It works out okay for me; I didn't really have the money for it anyway, but it's definitely something I'll be looking into down the line.
Back to Mark Waid, it occurs to me that, when people talk about deconstructionist writers in the superhero genre, Mark Waid doesn't get mentioned often enough. Aside from turning out solid, straightforward superhero comics in a variety of places and styles, he's done quite a bit of work in the deconstruction mode. "Kingdom Come" is an allegory about approaches to superhero storytelling, "Empire" is about what happens when the villain wins, and "Irredeemable" and "Incorruptible" are all about taking common tropes--the ultimate hero, the dastardly villain, the fall from grace, the heel face turn--and applying them in fairly original, extreme ways. It's not his only approach, like it might be for someone like Alan Moore, and I think that's why he might not be as closely identified with the process, but I think he deserves the same kind of consideration.
So, I have this now: 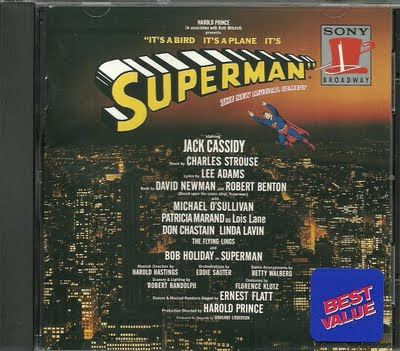 So, yeah. Don't be surprised if I end up talking about it soon.
Posted by Tom Foss at 7:28 PM