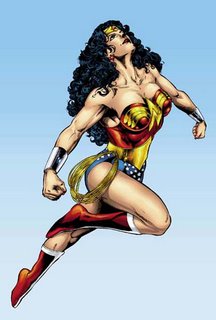 I want to write Wonder Woman.
I've read a good deal lately on Wonder Woman's inconsistent characterization. Each writer offers a different take on her: compassionate mother figure, brutal warrior, peace-loving diplomat, idealistic superheroine, naïve outsider, wise mentor, ineffectual damsel in distress, kung-fu spy, etc. For some, this presents a problem. After all, you can count on some constants in depictions of Superman and Batman. Wonder Woman doesn't have nearly as many of those constant traits. People ostensibly don't know how to handle her.

So, like Geoff Johns, I'd recognize this difficulty and turn it into a plot point, perhaps even a strength.

See, Wonder Woman's powers are derived from a micro-pantheon of patron goddesses (and god): Demeter, Aphrodite, Athena, Artemis, Hestia, and Hermes. Some tend to see this as the sort of relationship that Captain Marvel has with his benefactors. Cap has powers that mimic the abilities of Solomon, Hercules, Atlas, Zeus, Achilles, and Mercury; he's never really shown to interact with any of those figures, or derive his powers from those characters directly. Wonder Woman has a far more interactive relationship with her powers' sources. They directly impart their abilities to her, and they can remove them at any time.

Now, the thing with Pantheonic gods and goddesses, from Greco-Roman to Celtic to Babylonian, is that they are typically multi-aspected. One aspect of Athena was the Goddess of Wisdom, another was the Goddess of War, that sort of thing. This multifaceted nature of the gods and goddesses is compounded by the fact that, in the DCU, the Greek and Roman pantheons were amalgamated, so that Hermes and Mercury were united into the same figure.

This was the world-shattering result of War of the Gods. Say what you will about Infinite Crisis, but there's no way that the result of it can be any less important.

Anyway, while the Greek and Roman gods were mostly the same, this still adds another layer of aspects onto their characters. DC's fascinated with this idea of aspects; it was a huge part of Sandman, and it really ties into the legacies and superheroic pantheons that populate the universe.

So, Wonder Woman derives her powers from these patron goddesses, each of whom is somehow multi-aspected. She doesn't have the same sort of strict delineation of powers that someone like Captain Marvel does; at least on some level, many of her abilities are derived thematically. She takes her fighting prowess, wisdom, and strength in part from Athena, but she derives some of those abilities and her connection with nature from Artemis. What this leads to is a Wonder Woman who herself has several aspects, in some fashion.

I'm not saying that "warrior Wonder Woman" and "mother figure Wonder Woman" are somehow different characters; all these traits are part of her personality and lifestyle, to some degree or another. But like any religious person, her beliefs have shaped her personality. Part of that belief system includes praise and glorification through action. One worships Athena not just by praying to her, but by being valiant and worthy in battle. One worships Hestia by keeping strong ties to home and family, not just by kneeling at her altar. When Wonder Woman goes into battle, she is engaging in an act of worship to (at least) one of her patron goddesses. If she would do less than throw herself wholly into the battle, it would be a half-hearted, insincere prayer. Doing less than her best would be disrespect, even blasphemy. Traits that are naturally part of her character, like her warrior spirit or familial compassion, are exaggerated in certain circumstances because she is praying to one or another of her patron deities.

So, the pitch: the oracles are silent. The altars have dimmed. The gods have left this realm, and Princess Diana is left feeling emotionally and spiritually lost. She continues her quest for justice and peace, but the rituals and prayers seem hollow, now that she knows there is no one listening. She searches her soul, searches herself, but she is only left with questions and uncertainty. Once she took solace in knowing that everything was ultimately left to the Fates. Now, she wonders if her patron deities imbued within her not just their abilities, but aspects of their personalities.

Diana is not the only one with these questions: other pantheons have seen the power vacuum left by the abdication of the Greco-Roman deities, and seek to exploit it. Wonder Woman's existence and prominence brought a great deal of attention, and consequently power, to her patron pantheon, while other deities struggle to maintain their existence and even a modicum of their godlike abilities. Some believe that they may be able to influence Wonder Woman as her matronly patrons did, and thus draw power from the attention and belief granted to Diana.

Meanwhile, other down-on-their-luck gods and goddesses have banded together to create their own champion to inspire the world and draw faith and power. Unfortunately, what they inspire is of little concern to these capricious gods.

So Wonder Woman finds herself caught between manipulative deities on one side, trying to change who she is, a dark holy warrior on the other side, and her own personal crisis in the middle. Throw in some added complications from Heracles and the Marvel family, and I think I'd have a pretty full, interesting run.