DC Comics You Couldn't Pay Me to Write: Aquaman 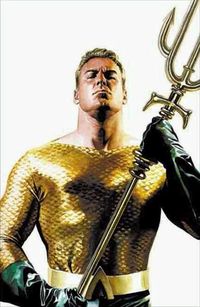 I love Aquaman. I really do. I don't know much about his character, except that for some reason he's faster than the Flash in the Justice League Task Force video game.

That's not entirely true. I know a bunch about Aquaman as far as powers go. I thought his portrayal in JLA: Year One was great, and I liked him in most of the regular JLA series, when he was there. I know his powers; I like the Peter David hippie hair, beard-and-hook look a little better than the short-cropped, clean-shaven orange-and-green garb. I liked the hook hand, but I don't miss it (kind of think he ought to grow the hair and beard again, it made him look more classically regal).

What I don't know about Aquaman is mostly his origin, and that's mostly because it changes so often. And because I've never regularly read an Aquaman series before (except Rick Veitch's, which was really, really boring). I don't know a whole lot about his personality, because it changes so often. I have ideas for what the character ought to be like, but I have absolutely no ideas for how to write him. I don't know what I could do to make him interesting to people. Sub Diego seemed like a better idea than "Sword," but I wasn't really drawn in by either (though I will be buying the next issue). I just don't know what I could do with Aquaman that would be new and exciting, I don't know how I'd pique my interest in the character, let alone anyone else's.

So, no offense to Mr. Curry, but you couldn't pay me to write him.