Dr. Walter Newell is an oceanographer. He is also a superhero. Like Quasar, he has one of the best costumes in Marvel Comics. 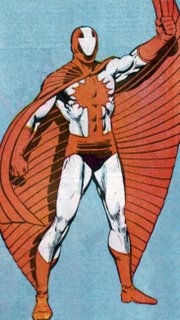 He's Stingray, and he's the star of another comic I'd write for free.

I'll admit, this passion is based entirely around his costume. Everything I know about Dr. Newell is from the Marvel Handbook and various websites. Naturally, I'd want to do a good deal of research to discover his personality before I dove into this comic (get it?), but that's all details, right?

A new resort is opening a few miles off the coast of California, not far from San Francisco. The artificial island, using technology from the Avengers' Hydrobase, will provide affordable housing, beautiful beaches, and a friendly community to its inhabitants. While it appears to be just a small island resort, the land conceals a floating underwater city, just beneath the surface of the water, with ample room for a variety of shopping and housing needs. Pacificana is the newest project from SimeCorp and its philanthropic president Cole Lawrence.

Among the amenities available to the islanders is the University of Pacificana, a small, selective school specializing in aquatic studies (marine biology, oceanography, underwater basketweaving, etc.). Dr. Walter Newell takes a high-paying tenured position as head of the oceanographic department, and moves to Pacifica in the first wave of residents, along with his wife and newborn son. The location and facilities offer him previously undreamt-of chances for research and teaching, and the job security and stability will certainly be a boon to his growing family. But this veritable paradise isn't exactly a utopia, and it quickly becomes apparent that Dr. Newell will be fighting for more than just the attention of sleepy freshmen. Corporate espionage and sabotage threaten the community, but do they originate from outside, or from within the highest echelons of SimeCorp? Who is the Naiad Action League, and why are these sea spirits demanding alimony from some men in Pacificana? Why are townspeople are becoming enthralled by whales' songs, and why have so many children started growing wings on their ankles? Will rampant pollution destroy the town? Are those...pirate ghosts?
Walter Newell juggles a family life, research, teaching, and superheroics as he combats various oddities and disasters as Stingray, official protector of the floating city!

Doesn't that sound like fun? And I'd do it for free!