All the Newsarama that's fit to print

So, what are the practical implications of this? Joanne Siegel and Laura Siegel Larson (LL? Neat) have been found to own the rights to the Superboy character, and to Clark Kent as seen in Smallville. What happens next, besides several appeals? Is it just a matter of royalties, or do the Siegels gain creative control of the characters? If that's the case, then what are they going to do? Sell them back to DC? Sell them to Marvel? Self-publish some Superboy comics? Can they do that? I'm reasonably certain that every other major character in the Superman/boy mythos, and the symbol on his costume, and his title logo, are owned by DC. What kind of comic could the Siegels produce?

Furthermore, would this apply to the Kesel/Grummett Superboy? He's not a young Clark Kent, he's not just Superman when he was a boy, he has different powers and a different costume (or three), is he owned by the Siegels by virtue of having the same name?

I hope this just ends up with an amicable settlement and a hefty royalties package, where DC retains the ability to tell stories about their primary hero when he was a boy. And the youthful clone of said hero.

See, I'm kind of torn by this. I think the comic companies really jerked around with their top creators back in the day, and ought to recognize that, apologize for it, and make some monetary recognition. The Siegels and Shusters and Kanes and Fingers and Kirbys and Lees and Schwartzes and Infantinos ought to be getting decent-sized royalty packages 'til the end of time. Every solo comic ought to come with a "_____ created by John Doe and Jack Smith" credit on the title page, like Superman and Batman and Wonder Woman do.

But I also think people shouldn't be able to live without ever working on the achievements of their grandparents and great-grandparents and other generations removed. Adults ought to earn their living, not have their living earned for them by some ancestor. I'm not saying this is the case here; Joanne and Laura deserve Jerry's royalties. But a few generations down the line, it starts to become like reparations. Why should you get paid for something your great-great-grandparents did or went through? I don't go looking through European crests trying to find out who owned my indentured servant ancestor who jumped ship to come to America. I don't go looking for the barons who owned my distant serf ancestors. Sure, they suffered, but I haven't, and I don't deserve to profit from their suffering any more than anyone else deserved to profit from their suffering.

Next: Dan DiDio is at least better at giving straight answers to questions then Joe Quesada.

Q: Is Booster still married to Gladys or did Superboy Prime get her too?

Why? Booster's clearly been in the future long enough to upgrade Skeets and get a little noticably older. Why can't we say he had annulment or divorce papers drawn up there, rather than say Superboy wiped her from existence? Sure, in the 25th Century she's long-dead, but we have no idea what time-traveling marriage laws are like. Why not just say she died in Blüdhaven? She was an OMAC who died in the assault on Themyscira? She was a covert Checkmate agent who died in Max Lord's purge? DC keeps saying they respect Keith Giffen and giving him high-profile assignments and whatnot, but then they say "oh, that most recent story you did with these characters who we've raped, killed, and otherwise darkened? Yeah, Superboy punched it."

Q: Will we see Ray Palmer (the Atom) in Infinite Crisis? Will we soon find out what's he been up to ever since the end of Identity Crisis?

Lame. Comic characters don't just walk off into the sunset. Either there's plans for Ray, or they just haven't planned his comeback, but something so final-sounding as "Ray is gone" is just lame.

Q: Why hasn't DC ever done anything with Apache Chief, Black Vulcan, El Dorado, Rima, or Samurai in the DCU? It would be cool to see them join the JLA or maybe the Global Guardians.

DD: Out of all the characters you mentioned only Rima catches my interest. Then again, if one of our writers has an interesting take on one of the others, hey, you never know.

Um, dude: Apache Chief=Manitou Raven; Black Vulcan=Black Lightning; El Dorado=Motorcyclist hero from the '90s, or swashbuckler from the old west, either way, they've done stuff with him; and Samurai was basically the Asian Red Tornado. In any case, most of those characters have been used by DC in some form or another.

Q: Ultra the Multi-Alien showed up during the Rann-Thanagar War as a background character. He's been kicking around for years and little has been done with him. Is there ANY chance that this great character (that did carry one of the sci fi titles for at least a year back in the sixties!) will get a taste of rehabilitation and get used again?

DD: Actually, that’s a character I enjoy as well, if only for one of the strangest origins out there. No surprise, except to see him in 52.

Maybe this was obvious, but I just realized that Ultra is simply the 20th-century (or whenever) version of Ultra Boy, or that Ultra Boy is the 30th-Century version of Ultra the Multi-Alien. While Ultra had discrete powers, each of which could only be used by one segment of his body, Ultra Boy has discrete powers, each of which can only be used one at a time. I don't know, I thought it was neat, and wondered if it was intentional.

Q: Any chance of ADVENTURE COMICS ever being revived? 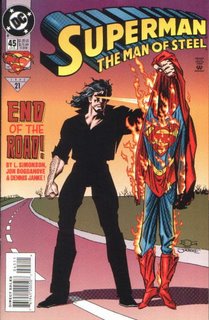 DD: Not sure if I can answer that one, it’s more of a question for Lois.

I can answer that: no. In the interior of issue on the right, Superman sets fire to his costume and walks away, bare-butt naked. It's not the only comic that established this, but it's the first one I thought of.

DD: Following the collapse of the Multiverse in issue six, a new Earth is formed and some who were thought dead appear to have been reborn. If they were meant to survive in the new DCU, they will do so, if they weren’t, things have a way of correcting themselves.

Also lame. I'm really not totally digging the "Superboy punched it and made it better" thing for resurrections. Seems lazy to me.

Q: When are Dick and Babs getting hitched?

DD: Better question is “Why didn’t they get hitched?”
...
Q: After Infinite Crisis, how many people left in the DC Universe will have the powers of The Flash?

Lame, lame, lame. The new Flash series gets one arc to hook me. The Speed Force and the Flash family was a universally good idea (okay, the future Flashes weren't quite so good). Pruning the family tree is a major step backward, and I hope it's a temporary step.

And why invent a new Ray? There's still a Ray in the DCU. Why replace him? Unnecessary characters bug me.

DD: Not sure if Linda Danvers as you remember her made it out of Crisis intact.

If this means that Superboy punched Linda Danvers out of continuity, then it may be grounds to bludgeon Dan DiDio with a baseball bat. While I don't want to ever see her again (unless it's under Peter David's pen), I want her to be around, somewhere, for potential use down the line. And I definitely want her in continuity; it takes some of the sting away from Kara.

Dude, Wendy and Marvin are on the Teen Titans? I'm sorry, that's the height of lameness. Snapper Carr as mentor to Young Justice? Cool. Wendy and Marvin as junior Titans? Not cool. We replaced Superboy with those Scooby-Doo rejects?

Okay, they killed Scarface and the Ventriloquist? Bah! A fantastic Batman villain, gone for no reason. What, they couldn't off the Ten-Eyed Man or something? Batman has scores of worse villains to kill.

Marvin and Wendy actually killed a large part of me. I'm pretty sure it's part of Johns' weird agenda to get as many random Kingdom Come plotpoints as possible into play. He got the floating head Fate in, he got the young Zatara in, he got Atom Smasher in, and now he's got Marvin (who's in the superhero bar sequence of KC and actually gets lines) running around.

You know, that's the only time I ever liked Marvin. It reminds me of that Family Guy episode where a drunken Elroy Jetson demands that taxi driver Bam Bam take him to Astro's grave.

I hadn't caught that the kid is Zatara. Does this mean that Zatanna is the Soldier of Victory who's fated to die?

I'm not too worried about Kingdom Come coming. Johns pulls in elements here and there, but he invalidated the story early on in JSA by killing Wes Dodds himself. It's not nearly as bad as it was 'round "The Kingdom," when Iris West kept showing up and whatnot. I think it's mostly that Johns recognizes that Kingdom Come had some good ideas and designs.

Another new Fate, though, seems like a dumb idea. Especially since it's the same gimmick that gave us the new Beetle. And especially after Fate...shudder. Must every Crisis give us a new Fate?

And it was Grant Morrison who kicked things off by bringing JJ Thunder out of KC.

Yeah, Hawk (who shouldn't have powers at all) is trying to prevent Aquagirl (who shouldn't be alive) from joining the Teen Titans in favor of people with "real power, like Zatara or Miss Martian." Zatara's on-panel, there, too.

Miss Martian's going to be a weeeeird character.

I don't think Kingdom Come's going to be the future of the DCU, either, but Johns sure has dragged a lot of stuff from it into books over the last few years. Just an odd habit, I guess.

Definitely no need to create a new Ray. It better be Happy T, at least. I can see him working for the government. Ray II seems too hot headed for that line of work.