Superman, Superboy, and the Nature of Duality 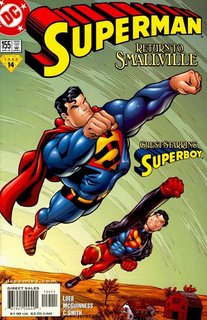 I want to write comic books. Yeah, that should be pretty obvious. To that end, I often write up brief outlines for characters or series that I'd one day like to script. Sometimes these are little capsules, sometimes they're character studies, sometimes they're even full arc outlines. This is what I do in boring classes when doodling isn't enough.

Anyway, the first Blue Prints references my thoughts on Superboy's character, and how he relates to Superman, which I detailed in one of these outlines. Rather than padding out that entry with unnecessary explanation, I thought it merited its own post.

Superman is a collection of opposing dualities, held together by a strength of character far greater than the strength required to stop runaway trains or leap tall buildings. He's a wide-eyed farm boy and a streetwise city dweller, a sharp-minded investigative reporter and a heroic leader, an orphan and a family man, a godlike alien and a down-to-earth human. He is Clark Kent of Smallville, KS, a one-time athletic social outcast who became a world-renowned syndicated columnist and world-class investigative journalist. He is Kal-El, the last son of a dead world, the final (well, almost) heir to a millennia-old legacy. He is Superman, the primary-colored boy scout who led the second generation of Earth's superheroes. Clark may be the most honest expression of his personalities and abilities, but when people say that Clark Kent is the real person and Superman is the mask (or vice versa--curse you, David Carradine!) they're missing a part of the point. Superman is the sum of his identities: Clark's upbringing, Kal-El's legacy, and Superman's incredible abilities.

Superboy, on the other hand, is torn between his dualities. First it was inexperience and immaturity vs. a desire to be seen as an adult, then it was superheroics vs. a desire to be normal, a maturing personality vs. physical agelessness, civilian life vs. superheroic life, responsibility vs. fun, orphan clone vs. youth with a family, nature vs. nurture, Superman vs. Lex Luthor...every stage of Kon's life has been plagued by these oppositions. He hasn't yet matured enough to straddle these worlds, to relish in them the way Superman does, but he's still young, still new to this sense of identity and to the dual responsibilities of civilian and superhero life. Eventually, he'll find the balance, and he'll find that what is important is not what he is, but who he is.

I think this is a major part of why Superboy belongs in the modern Superman mythos. He's not just "Superman when he was a boy," he's "Superman when he hadn't figured out exactly what that meant yet." He's Clark's younger brother, looking for guidance and acceptance, trying to fill Clark's shoes and find his own way at the same time. Supergirl doesn't even have a secret identity now; she's content being a full-time superhero. Superboy comes from a different background and point of view, and he brings a wealth of new and different character opportunities to the Superman family.

Totally agree with you about Superman being the persona where Clark and Kal come together. I think that's what Smallville is kind of stumbling toward, when they're not re-writing episodes of Dawson's Creek.