There should still be an Electric Superman 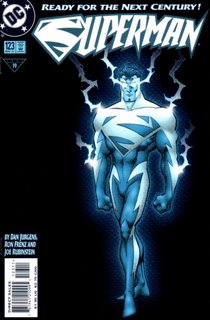 I first heard about Superman's new costume on some vapid conservative talk radio show that my mom was listening to in the car. The host was ranting about how they were going to give Superman a new blue-and-white costume to match the U.N. colors. I laughed the whole story off as ridiculous; at best the guy must have misunderstood some press release or something.

Eventually, ads started showing up, and the storyline began in earnest. Superman started passing through things, electronics went nuts around him, that sort of thing. I was upset at first, but once I saw that they hadn't changed the title of "Superman: The Man of Steel," I realized that it'd be a temporary change. I'd come a long way since I was convinced that the Cyborg was the real Superman.

But I really dig the costume (it even follows the Ron Frenz rule of costume design! Ron Frenz drew that cover!), and I think the powers are interesting, despite the fact that it became business as usual after a few issues. They brought the outfit back for Strange Visitor, but that was an awkward name for a character, and she was so tied up in cosmic mumbo-jumbo and weird time travel nuttiness that it's probably best for everyone that she died in Our Worlds at War. Even with the burden of those two semi-failures, I think it's a shame to let such cool character potential go to waste. 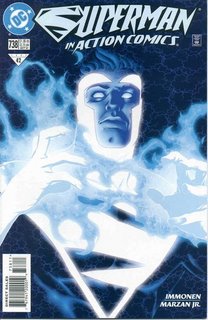 So, let's bring back the Electric Superman. No, no, I'm not suggesting that Superman return to the blue-and-white, that's just a bad idea all around. But there's nothing to stop us from getting some new blue. With a little more planning as far as what the character's powers actually are, and with some solid story threads to explore, I think we could turn Superman Blue into a viable, interesting character, and a worthy addition to the Superman family.

Let's face it, the Superman family ain't exactly as big as it used to be.

So, over the next several days I'll post a variety of character proposals designed to bring back the Blue. I think I'll call the feature "Blue Prints."

Maybe they could have Robin's cloning experiments end in a 'Lectric Blue Superboy, thus bringing a Superboy into the DCU who's so far afield from the original Superboy template that I think it'd duck that copyright suit.

Sounds like you and I are on the same wavelength, Jon...

Superman Blue is the number-one hero of Earth-8.