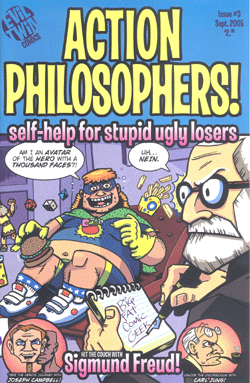 It's about one of my favorite series, Action Philosophers, which is sadly ending with issue #9. As a fan of comics, philosophy, and humor, this is rather upsetting to me. I've picked up every issue of AP so far (except the latest, which ought to be in the mail to me fairly soon), and they're among the most fun, entertaining, and intellectually satisfying comics around.

So, while I'm sad to see the series end, two of the follow-up projects give me hope:

–COMIC BOOK COMICS would be the only history of comic and cartoon art that IS a comic book, and would settle such burning questions as: Who really created the Marvel Universe, Lee or Kirby? How much did American comics influence manga? And the newspaper funnies: Who cares anymore, really?

–And MEGA-MYTHOLOGY retells the world's greatest myths and legends in the irreverent gut-and-brain-busting Action Philosophers style.

Both of which sound fantastic. I kind of hope the Comic Book Comics comes out first, but I'll pick up either one. The "Office Samruai" one doesn't really interest me though.

So, while Action Philosophers may be ending, at least we'll get a nice dose of Evil Twin stuff afterward. Here's to many more years of the smartest comics around!