I want a dream Legion, so I don't have to dream alone

Crazy theory time!
So, Supergirl showed up in the 30th Century, looking bright-eyed, bushy-tailed, and just a little bit crazy (which is several steps up from her portrayal in her own series). She claimed that the Legion, the 30th Century, and even her adventures on Earth and the destruction of Krypton, were all a dream she was having. While these ramblings were dismissed by the Legionnaires, her predictions (being accepted into the Legion, being given a flight ring) had a strange way of coming true.

Let's backtrack a bit. Nura Nal, aka Dream Girl, had the power of generally-infallible precognition. She died in battle, and Brainiac 5 placed a force-field around her body to put her in stasis. When Supergirl showed up, claiming the whole thing is her dream, she learns that there are no extra flight rings. She wishes for one, and immediately Atom Girl arrives with a flight ring, courtesy of Brainy. Other Legionnaires remark that this either means that Brainy had another ring in production before they lost their funding the previous year, or he gave her Dream Girl's ring.

And here's what I realized last night: the flight rings are keyed to their wearer's genetic signature, as established by Triplicate Girl in an earlier issue. So the only way that Supergirl could use Dream Girl's ring is if Brainy reprogrammed it, or if Supergirl and Dream Girl were somehow the same person.

Other things to consider before I get to the "hows": traditionally, Brainiac 5 has had romantic feelings toward Supergirl or her Daxamite counterpart, Andromeda. Brainiac 5 was involved romantically with Dream Girl and she said that eventually they would marry. When Supergirl went on about the "dream Legion," Shadow Lass said that maybe they should have named her Dream Girl.

Here's what I'm thinking: somehow, Dream Girl's abilities have been enhanced and altered by her current state, and these abilities have manifested themselves as a superheroine from the distant past. This Supergirl is real enough, but only as real as any of Dr. Destiny's illusions. She's not the Supergirl we know and tolerate, and when Dream Girl is resurrected, this Supergirl may very well go poof.

Don't get me wrong, I would love for this to be the 'real' Supergirl, since she's certainly not receiving characterization this good in her own title. But they just did the "character pulled from an indeterminate place in our near future to arrive in the distant future until they can be sent back" schtick with Superboy a couple of years back, and I can't imagine they'd pull the same trick twice in such a short time. Something doesn't add up. 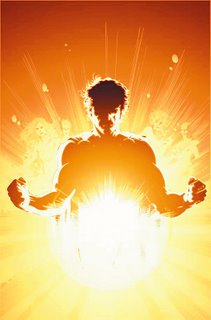 The solicits for November claim that S&LSH #24 features "the return of a Legionnaire you never thought you'd see again." The cover over there on the right, what with that prominent figure in front wearing a cape fastened with two big circle things, seems to suggest that Mon-El (or M'onel) is making his way back to the fold.

This was just going to be about Dream Girl/Supergirl, but the more I write, the crazier the theory becomes.

So, I see two ways of bringing back Mon-El. In the crazy one, Brainiac goes through with his plan to use memory-altering villain Lemnos (anagram that one, kiddies) to resurrect Dream Girl. When that happens, they learn the truth about Supergirl (that she's a dream-creation), but instead of dying, Supergirl's dream essence has some strange reaction with Lemnos, wiping his memory and bestowing upon him the powers of an ancient Kryptonian. He joins the team as Mon-El, knowing little about himself, and is there mostly so that the Legion can keep an eye on him.

Option two: remember the fifdeetu? The last time the Dominators played a major role in the DCU was during Invasion, the story which introduced the Daxamites to the post-Crisis, 20th Century DCU. It would be fitting if they showed up again before our favorite Daxamite re-emerged in the 30th century. But the Dominators back in LSH #17 said "Existence is a loop. Time is a circle," before mentioning the Fifdeetu. Originally, Mon-El was placed in the Phantom Zone in the 20th century to emerge in the 30th century, where his lead allergy would be cured. How do you make a loop of that?

This has been another installment of "crazy theory theater." You may resume your regularly scheduled comic discussion.

So Supernova is Mon-el?

It's one theory. It's the theory I believed before Supernova showed up. Now that we've seen Supernova in action, however, I'm a subscriber to the "Supernova is the real Michael Carter/Booster Gold."

But I'm keeping my bases covered.