So, everyone's blogging about this image, 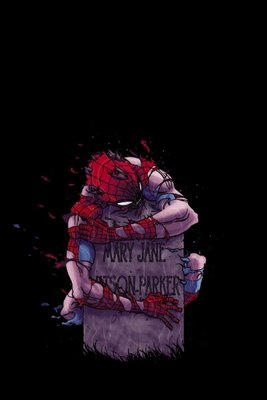 which apparently first showed up at All the Rage. Some are speculating that it means Mary Jane will die in Civil War. After all, that would solve Joe Quesada's problem with the relationship.

But I'm not convinced. There are too many suspicious things about this image for it to be what it appears to be.
1. Joe Quesada has said that killing Mary Jane would be worse than the marriage, because it turns Spidey into Spider-Widower, making him seem even older.
2. Peter's wearing the old costume, which may be a minor detail, but seems odd for a major Civil War cover.
3. The shape's not right for the "widescreen" covers of the Civil War books.
4. A big event like that would be kept a better secret than either the unmasking or the identity of Daredevil, not revealed so far in advance.
5. After all the brouhaha about keeping the creative team constant, why would they do a cover that clearly wasn't by Steve McNiven?

My initial thought at seeing the cover was that it was clearly a Scott Kolins piece, but a lot of people have suggested that it's from Kaare Andrews' futuristic Spider-Man: Reign, and the art seems pretty close. Sure, #1 could be a lie (like Speedball), #2 could be because he switches costumes or it could be yet another cover that's solicited with one costume and changed for the release, #3 could be because it's a variant, or cropped oddly, #4 could be because it stirs up interest, and #5 could also be the signifier of a variant. Those are all possible, but for all of them to stack up? I'm going to trust the simpler answer, that this is promo art for Spider-Man: Reign, designed to drum up support both for it and CW by making the general public think MJ is going to die in the mainstream MU.

You're probably right, but I have a hard time setting aside my belief that Joey Q will always do the stupidest thing imaginable in any given situation.

I was just thinking the other day about the liklihood that Mary Jane will be dead before the end of Civil War. Narratively speaking, it would complete Peter's arc: he unmasks because of Tony, Mary Jane is killed because his identity is now know to his entire rogues gallery, Peter returns to his old threads and joins Captain America against Iron Man. So from a story standpoint, it's certainly possible. I am still skeptical of Joe's willingness to go through with it (and I hope they don't because it's a bad idea), but hey, this is the guy that had Spider-Man reveal his identity on national television.

Isn't REIGN supposed to be set in the future too? The future is a fine and reasonable place for MJ to die...

"Joey Q will always do the stupidest thing imaginable"- Ha! I've posted and commented many times on the Spidey-MJ marriage and the Marvel editorial teams visceral hate of it.
I recently heard from a comic creator- an insider- that 'mark his words they will use PP's identity reveal to get rid of Mary Jane'.
They are just not listening to fans on this one.

My only question is what exactly is Spider-Man actually doing to that tombstone? I try not to be judgmental. I realize each one of us grieves in his or her own way. It's just that it kinda looks like he is getting his freak on with that slab of rock.