What are DC's editors doing?

The snarky answer is "writing Flashpoint tie-ins." But seriously, DC, you're paying an awful lot of editors, and I'm seeing more sloppy, basic errors slipping through than ever before.

I suppose I started noticing it when Perry White didn't know what 'passive language' meant and Lois Lane redrew state borders, but just in the most recent books I've read, there have been a slew of sloppy errors and sloppy writing in general. And it's the kind of thing that's up to editors, not writers or letterers necessarily, to correct.

So, three examples, all books I've read in the last two days. First, "Outsiders" #37, a book written by former editor Dan Didio, edited by Harvey Richards. I can forgive the comma splice in the first caption on the first page; it's page four--a full-page splash--that I'm concerned with. I'll chalk the sentence fragment in that first caption up to artistic license--totally acceptable--but it describes Doomsday as "The monster who murdered the greatest heroknown to man" (emphasis mine). Okay, a dropped space, not a big deal, right? But it looks sloppy and unprofessional; it would have come up in even a basic spellcheck search, and I have to imagine that the page gets looked over by at least one person after it's lettered. Isn't it the job of a decent editor to check the copy?

As I continued in reading "Reign of Doomsday," I came to James Robinson's "Justice League of America" #55. No spelling errors that I caught here, but there was a serious stylistic problem. The first page has fifteen 'bubbles' counting every caption and dialogue bubble. Within those fifteen bubbles, there are eleven ellipses. Robinson seems to be a really big fan of the separator characters, your ellipses and double-dashes, and I say that as someone who greatly overuses double-dashes. And perhaps it's my familiarity with those double-dashes that made them stand out so much for me this issue, because they are everywhere. They're overshadowed by ellipses on that first page, but even on that first page, a page where exactly two people have speaking parts, there are two people who end a sentence with a double-dash, interrupted by something else. Alan Scott, who is inexplicably Professor X, interrupts Jade, then interrupts himself, and sets the tone for "Justice League of America," the rudest comic ever.

Page two features Eclipso, who uses five ellipses in the span of three connected speech bubbles, then four more between four captions. The elliptical menace perforates Dick Grayson's narration on page three and even Alpha Lantern Boodikka's speech on the following pages. And then Supergirl ends a sentence with a double-dash, and it sets the ball rolling again.


Dick Grayson (Narrative Caption): Lucky. Just plain lucky. All the weapons on this craft...to fight Kryptonians...I can use them to fight--

Supergirl (Narrative): Sure. He's here for me anyway. I'm going to--

Supergirl (Narrative): ...it's not me he wants at all.

Boodikka (Dialogue): Ring? Why can't I--

Jade (Dialogue): ...Take my father away from this. Now. Please. Now.

I understand using an ellipsis to link separated balloons or boxes; they demonstrate that a thought hasn't been finished, what in actual dialogue would be a hanging or pregnant pause. Such a pause is hard to accomplish directly after an exclaimed order.

The rest of the book features a "bubble ending in a double-dash, indicating sudden stopping or interruption" fifteen times in the remaining eleven story pages. This includes such interesting instances as Supergirl thinking "He'll kill Grayson, I w--," with no apparent reason to stop thinking, then saying "Me! Hit m--," somehow being interrupted in the middle of a single-syllable word. That particular disease hits Batman's next speech bubble, "That was too close f--."

Look, it's nitpicky, I know. But it's also a ridiculous excess of punctuation, and generally for no good reason. This is the kind of nitpicking that editors are paid to pick up on as being clunky and unnatural, and then fix it. 90% of the ellipses and double-dashes in this book could be replaced with commas, taken out entirely, or (heaven forbid) replaced with words, without losing an iota of the sense of urgency from the dialogue and narration of a book centered around fight scenes. It would have the added advantage of allowing us to see what Supergirl "w--," and not forcing us to believe that someone could be interrupted in the middle of a two-letter word1

But I might not have posted about it if not for Detective Comics #876, and this: 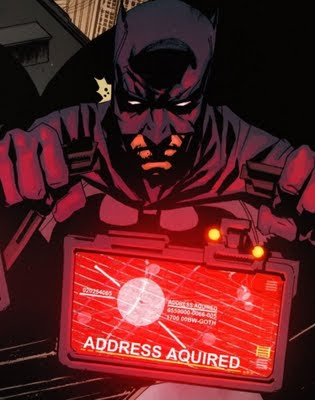 Batman is one of the smartest men alive. He designed these computers to be bleeding-edge, beyond-state-of-the-art, with his genius intellect and limitless funds.

And they can't spell acquired.

Seriously, I would think that the blaring red screen in the middle of the page might stand out to one of the three editors on this book. Apparently this either slipped past everyone who saw the lettered art, or letterer Sal Cipriano and editors Katie Kubert, Janelle Asselin, and Mike Marts are all unfamiliar with the concept of spellcheck.

Look, I don't want to be the nitpicky fanboy. I'm not trying to point out little continuity flubs; I'm not even criticizing fictional science content. I'm saying that these errors in basic English are sloppy and make DC Comics look terribly unprofessional. These comics pass through many eyes, and in some cases, many editors before I stand in line to pay my $2.99 for them, and I don't think it's unreasonable to expect those editors to edit.

1. Yes, she was interrupted by a teleportation, presumably instantaneous. In which case, Robinson should have followed through on the trope (and the Star Trek VI reference) by having her say "--E!" on the other end. This suggests that she actually stopped speaking in the middle of the word "me."
Posted by Tom Foss at 6:29 PM