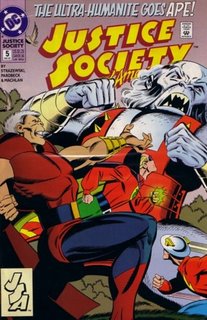 Today is the 10th anniversary of the death of Mike Parobeck, one of the first comic artists I knew both by name and by style. His style predated and presaged the sort of simplicity and sharpness that would come to be associated with Bruce Timm and the animated DCU. I couldn't believe it when I'd heard of his death, and I still can't believe that he didn't live long enough to become the icon he inevitably would have been. His art was well ahead of its time, it's a shame he was as well.

This last year, I managed to pick up the complete run of the JSA series that Parobeck drew, of which I once owned only two issues. That comic introduced me to the JSA, to Jesse Quick, to the Ultra-Humanite, and to the generational aspect of the DCU as a whole. And I never would have enjoyed and read those issues as much and as often as I did without Mike Parobeck's peerless contribution. Do yourself a favor: pick up a Parobeck comic. You won't be sorry.

Oh, and check out what these folks have to say, they know a lot more than me:
Seven Hells
Newsarama

I totally have that issue of JSA. There's nothing I like more than giant monkeys with people brains.