It didn't take long for 2007 to get its first "Cassandra Cain," the character so screwed up by editorial decree as to not only make the character unrecognizable and antithetical to everything the character once stood for, but to cast doubt on the sanity of the editorial staff as a result. I'm hesitant to put spoiler space here, because the idea is so ridiculously awful, but here it is anyway. 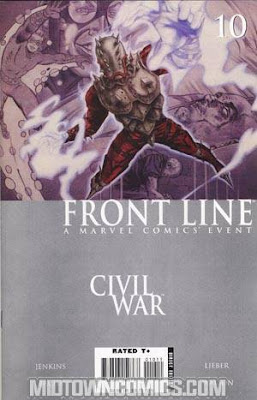 So, after months of treating Speedball, one of the most fun characters ever to grace the 616, like the Marvel Universe's personal punching bag, they've decided to pour salty lemon juice into the wound and make him a morose villain with pain-based powers who is a member of the gang of murderers who make up the New New Thunderbolts. All because he was needlessly scapegoated for being involved (not even leading, just surviving) in a botched assault on a dangerous-but-totally-in-his-league supervillain. And then imprisoned indefinitely to show us just how terrible the Guantanamo Bay/no habeas corpus situation is.

So, the lesson we learn here is that when a heroic person faces character assassination, undeserved guilt, and government torture, they become the perfect malleable brutal soldier for the government. Anyone still left wondering why people criticize Civil War for poor use of allegory and mixed messages?

I've read enough of Paul Jenkins's writing to doubt that this was his idea. This could be Warren Ellis's "I Hate Superheroes" garbage popping up again (you hate superheroes, Warren? Really? Then stop writing them!), it could be part of Mark Millar's awesome plan (the bad allegory aspect fits right in), but somehow I think this all falls on Joe Quesada's shoulders, because of his senseless personal vendetta against Speedball. Yeah, Joe, I got it. You don't like Speedball. You don't have to talk about it in every Newsarama interview for two months, especially when the character hasn't had a starring role in years (Joe's rants were pre-Civil War, as I recall). You might as well end every post with "I Hate Swarm." Great. Then don't use Swarm. Put out a company-wide decree against Swarm-usage. Call it the "No Nazi Bees" policy. Say that Swarm will only appear in MAX books, but then claim that the policy never existed. It worked once, right? But you don't take your personal dislike of a character out on the character. You don't twist and warp and abuse them until they become a completely different character that you do like. You find a character that you like, or you make a new character. I don't like Donna Troy. If I ever happen to be writing comics, I will do my best not to feature her. If I have to feature her, I will try to find a way to approach the character so that I like her, or at least respect her. I won't have her kidnapped and raped and tortured and made to feel guilty for, oh, let's say "Joker: Last Laugh," until she becomes Broken Girl, the angry, angsty girl who will break your spine to spite your torso. That's how you deal with established characters in an expansive universe. You respect them. If you make changes to those characters, including death, you do it with respect and dignity, and not out of a personal dislike.

Unless those characters, apparently, are the Freedom Fighters.

It may be a petty distinction, but I think when it comes down to it, I would rather have a writer kill a character she loves than one she hates. The perfect example would be in Infinite Crisis, far from a perfect example of anything. Dan Didio wanted to kill Dick Grayson because he didn't like him. Instead, Geoff Johns killed Superboy, his favorite Titan. I don't know how Dick's death would have gone down, but at least Superboy died with a modicum of dignity, and he did so in a spectacular fashion. And while I was a little upset that his teammates and family haven't been seen in black armbands during 52, no one can deny that he died a hero's death. If there's a right way to kill a character, that's it.

And, of course, if you leave a backdoor ajar for the character to return, so much the better.

And that's the difference between characters like Superboy, characters like Cassandra Cain, and characters like Speedball. Superboy's death was done with respect by an author who loved him. Cassandra's change was done with disregard by an editor who seems wholly ambivalent toward her. And Speedball's change was done by an editor who hates him. Maybe if someone who has a fondness for the character (I'm betting Fabian Nicieza) turned Speedball into Penance, it'd be more palatable. Not much more, but maybe a little more. But knowing that it comes out of this sophomoric spite really just turns my stomach. One more shining light of Marvel Universe fun rubbed out by the unstoppable steamroller of "realism" and "maturity" (or, more precisely, "faux-realism" and "what a fourteen year old thinks maturity is").

Cheers to the writer who eventually undoes this half-assed decision.

Congratulations, Joe Quesada, you're a dumbass in 2007 too.

Just wait until it's revealed, later this year, that Penance isn't Speedball at all, but Mary Jane Watson-Parker gone insane because of what Civil War did to her husband!

Now that would give Quesada a reason to get rid of the marriage.

I'm not reading Civil War: Frontline (waiting for the trade so I can read it at Borders...wait, did I say that out loud?), but this sounds like an unspeakably awful idea.

Paul Jenkins seems to get caught in these editorial crossfires a lot. I recently listened to his Fanboy Radio interview from '04 where he reveals that Marvel made him give Spider-Man organic webshooters to match the movie version. He was very conciliatory on the subject and handled the explanation well, not compromising his opinion while also not compeltely throwing Marvel editorial under the bus.

I've got to believe this isn't his idea. Can this be the same guy who wrote all those fantastic Hellblazer stories? I mean, I'd write what they told me to for the paycheck too, but...

Ignatiusmonkey, we're on the same wavelength in many ways. Jenkins has written some of my favorite Spider-Man stories, and his run on Peter Parker/Spectacular is almost universally awesome...
...except when he gets caught up in those awful editorial fiats. "Disassembled" was a terrible arc, and I don't blame Jenkins for it at all. I'm going to have to find that interview, because it really matches up with what I've suspected for some time.

Poor Jenkins, he's a fantastic writer, whose only missteps are when he's writing a story dictated by editorial. Sadly, "Frontline" is just one big misstep.

Editorial fiats are -- by and large -- a very bad idea. As you so eloquently put it, Tom, they result in writers -- who may be good writers -- dealing with characters they don't understand.

And they also often feature editors with delusions of grandeur trying to put their own mark on a universe...

I won't mention Cassandra because that topic causes me to foam at the mouth and I've already broken one keyboard this year...

I was already down on this Warren Ellis Thunderbolts just because it was going to star Norman Osborn, but now I find out that the dude in the weird Hellraiser/Thirteen Ghosts-esque attire is the Super-Hero Formerly Known as Speedball?

I know that you got to take the bad with the good, but this is just idiotic.

For the record, according to the newsarama message boards, Paul Jenkins has stated
"This was first put to me by Joe, when I was in New York for the editorial conference that shaped Frontlines.

Joe explained to me that over the years he has watched with great interest as fans of Speedball get very worked up defending the character yet ultimately, the sales on Speedball books are very low. We talked about doing something with the character in Frontlines. Joe really wanted to build him back up again, generate interest in him that had been sorely lacking. My impression was that if you weren't a Speedball fan (of which there weren't too many) then you were probably kind of ambivalent about the character.

Joe felt it'd be a good idea to put this guy through the wringer because -- as I've stated elsewhere -- we can't care about him just because he shows up, we have to care about his conflicts and triumphs.

Most of the Penance creation took place while Joe and I would walk from his place to the Marvel offices. Joe had suggested, for instance, the scene where Speedball gets shot coming out of a building a la Jack Ruby and Lee Oswald. I came up with a new wrinkle: Namely, his powers are now driven by pain. My memory is that I first suggested Penance as a name but I wasn;t sure i liked it. But Joe and others did, so it stuck.

Ask Joe if you don't believe me"

Quesada loves the character. It's just that he's love is not something a character wants.

And...and the editors thought this was a...GOOD idea? I am perplexed.