"Could it be possible? This last son of Krypton has not yet heard anything of this, that Rao is dead!" 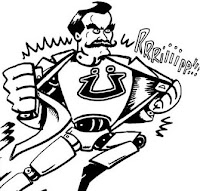 Or, Süperman, as written by Friedrich Nietzsche, responding to Erin's challenge. I think it could be better (and less obviously pulled from the first part of Thus Spake Zarathustra), but I'm not as familiar with Nietzsche's style as I'd like to be, and, honestly, it's just too good a comparison to pass up.

When Kal-El was eighteen years old he left his home and the farm of his home and went into the Arctic. Here, he enjoyed his father's spirit and his Solitude, and for five years did not tire of it. But at last he took up a costume, and his family's crest came over his heart, and one morning he rose into the sky, floated before the yellow sun, and spoke to it thus:
"You, great star, what would your happiness be had you not those for whom you shine?
"So it is with me. For five years, I have trained in my Fortress. I would have tired of my solitude and my training had it not been for the people of Earth and the eagle and the banner of my homeland.
"And I waited for you every six-month-long morning, took my superpowers from you, and thanked you for it.
"Behold, I am weary of my training, like a balloonie that has inflated itself with too much Kryptonian air; I need to open myself up and release it.
"I would give away and distribute my power, until the fearful among humans find solace once again in their safety, and the weak in their defense.
"For that, I must descend to the streets, to live as they do and still bring hope and power to their lives, overrich as I am with strength and abilities.
"Like you, I must be a light for them, a beacon of truth and justice who shines while above them. And when I go down to walk with man, I must shine as you do by reflection, my example leading them even once I have descended.
"So bless me then, you yellow torch, that can shine upon an all-too-great hope without envy!
"Bless the battery that wants to be overcharged, that the power may flow from it golden and scarlet and azure and carry everywhere the reflection of your gift of life.
"Behold, this battery wants to discharge itself, and Kal-El wants to become man again."