I don't say this nearly enough

You know, for all the times I've ragged on them in the past, for all the energy and enthusiasm I focus on the competition, and for all the abuse I heap upon their current EIC, there's something that often gets left by the wayside:
I Love Marvel Comics
Maybe it's just the video games talking; maybe it's the fact that I have three unread issues of Marvel freaking Apes sitting on my desk, but I really do love Marvel Comics. Not everything about them, mind you--as you might guess, I go through periods where my love is on the down-swing, but there are a lot of things about the Marvel Universe that just hold a special little place in my heart. So, for the next few days, I'm going to wax a little poetic about the House of Ideas.

And where should I begin? Well, I've been playing Marvel: Ultimate Alliance again recently. The first time I played through, my main team consisted of Captain America, Spider-Man, Thor, and Luke Cage, who occasionally got swapped out for the Thing (though I can't quite remember why). This time around, I've been playing a bit more with some of the in-continuity teams. The X-Men are fun, since there are so many combinations, and it's been neat to watch everyone mourning the death of Nightcrawler...even when he's in my party. I do wish Cyclops weren't such a wuss, but what else is new? The Classic Avengers are fun, especially since I already keep Cap and Thor in their original costumes, and Iron Man's classic armor has better boosts than any other early-unlockable suit. I was chomping at the bit halfway through the game so I could unlock Ghost Rider and build the New Fantastic Four team, which is sadly about as effective as it looks. I still need to get the Joe Fixit outfit for Hulk so I can complete the look. As soon as I unlock Silver Surfer, I'm going to put together an erstwhile Defenders team (aren't they all?). But more than anything, I keep coming back to the Fantastic Four. In my first play-through, it seemed like Thing was the only one with anything useful to contribute, but after playing with them a bit, I see what an incredible group they really are. Johnny's fire powers are all so good that I have trouble picking which ones to keep active; Sue's force field ability and "Unstoppable Force" skill make her nigh-invulnerable; Thing has a great set of upgrades and abilities. If there's a weak link, it's Mr. Fantastic, who still has some pretty devastating attacks. Maybe it's just because I rock the game's socks, but playing as the FF has given me quite a bit of insight into why four folks with relatively tame powers can be one of the most formidable forces in the Marvel Universe. 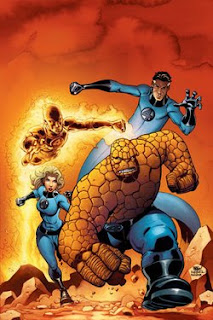 I'll admit that as a kid, I never really got into the team. I bought the title for a short time around Infinity War (with all the doppelgangers running around) and again when Reed was "dead" and Thing was wearing a mask, but they never caught my interest. The next time I regularly bought the World's Greatest Comic Magazine was during the Waid/Wieringo years--specifically, the storyline where Dr. Doom turns his ex-girlfriend into a suit of skin-armor. Contrary to how that sounds, the book was incredibly fun, and is among the best things I've ever read by Mark Waid. The thing about the Fantastic Four that I think tends to get lost in the shuffle is that the best stories, whether they take place in the Negative Zone or the suburbs, are ones that center around the interactions and relationships between the FF family members.

And that, I think, is why the FF is the only group in the Marvel Universe who can make a transition from New York street crime to global supervillainy, to space invasions and otherdimensional entities, and do it seamlessly. They are, quite literally, the close-knit family that can handle anything. When written poorly, the Fantastic Four are just another superteam; when written well, the Fantastic Four is totally unique among comic book superheroes.

And that's pretty fantastic.
Posted by Tom Foss at 12:12 PM

You see, the thing that I hate the most about the current regime at Marvel has been their awful handling of the FF. They handed the book to Waid/Wieringo, who then had a fantastic run, but who were then suddenly shuffled off of the book for an awful run by JMS, followed by the whole Civil War debacle and then the ship got righted, briefly, by Dwayne MacDuffie, only to have Millar and Hitch come in and gum up the works again. It's not that they can't get it right, it's that they do get it right, but they can't stop "fixing" it. Gah!

The only time I've ever read the FF was the Waid/Weiringo run, and it was glorious. When JMS took it over and made Reed into God or somesuch I about crapped my pants and dropped it immediately. I haven't looked at it since. I have this tendency to hate the FF unless it's done really well. If it's even mildly off, I despise it. There's no middle ground for me, for some reason.

Which is to say, those movies sucked hardcore.

Come to think of it, I don't think I'm reading a single Earth-616 comic at the moment, just a bunch of Ultimate stuff. Wait, that's not true. I'm reading Wolverine. I will never not read Wolverine. Call it an addiction.