SilverHawks Sunday VIII: Getting a grip

This is the Miraj: 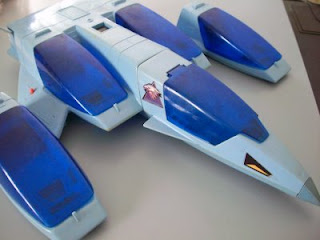 This is the underside of the Miraj. 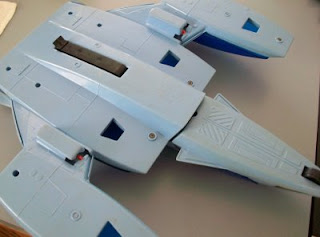 That black strip? It does this: 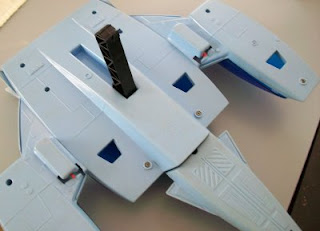 It has a handle. Now, it's not alone in that (after all, the villain vehicle/space squid Sky Runner has one too), but it's among very few toys I know of where the handle is recessed and...well, optional. Most action figure vehicles don't even think about handles, and most of the ones that do either try to make them inconspicuous by making them part of the design (like He-Man's Blasterhawk) or throw inconspicuousness to the wind and just slap a handle on it (like He-Man's Talon Fighter).

The recessed handle is a really smart move. It recognizes the need for play practicality--kids have small hands, space opera dogfights are hard to do with awkwardly-weighted plastic ships full of figures, you have to set it down in order to fire the missiles, etc.--while also recognizing the importance of aesthetics and the fridge logic that might result from slapping on a handle ("Who does He-Man expect to be holding his ship, and why would he accommodate them?). A lot of times, functionality and form are at odds with one another, but I think this strikes a great balance that maximizes both. It's a small thing, but it's worth pointing out and commending, at least.
Posted by Tom Foss at 8:27 PM

I always wondered if the front "foot" of the old Milleniun Falcon toy was intended to be a handle or if it was a happy accident.