We'll start small today. Clocking in at just one seven(ish)-panel page, the Superman origin in "Action Comics #1" is one of the shortest on record. The thing I like about these short origins is that, while they don't offer much depth or detail, they do expose what the creators thought was most important about the character.

In that regard, this first origin story is particularly interesting. Read it for yourself: 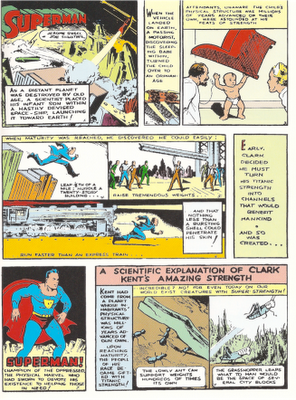 We start with Krypton. Or, rather, we don't. Superman's home planet isn't named in this opener. We don't spend any time lingering on Jor-El or Lara or the Council or any of the other trappings of Superman's pre-Earth origins. For Siegel and Shuster, the most important part of this story was starting it quickly, getting the exposition out of the way and the protagonist into the spotlight. So we have a "distant planet" dying of "old age," and a scientist who sends his infant son off in a rocket toward Earth. Other, later stories would fill in the gaps there. "Old age" would be replaced as a cause for the planet's destruction (over and over and over), but the endpoint is always more or less the same.

There's something almost Biblical about the way the second panel's meaning has changed over the years. Just as the serpent in Genesis is never identified as Satan--that's a later interpretation--the "passing motorist" was never identified as the Kents (especially since the noun is singular). Indeed, this iteration of the origin gives Clark no human family whatsoever! Moving on through the third panel, we might conclude that Clark grew up in an orphanage, which I think would make for a very different Superman mythos: just imagine how that would have been reinterpreted in 1985.

Panel three gives us a first glimpse at one of Clark's feats of childhood strength. Strangely enough, this one doesn't get referenced much in modern adaptations--probably in part because the orphanage rarely makes it into the origin these days. I'll be interested in seeing some of the early versions of the "lifting tractor to get ball" and "lifting truck" scenes that usually fill this role. Why this scene? Well, it establishes what happened to Clark after crashing on Earth, and it demonstrates that he's always been extraordinary.

I'd also like to take a moment to note the doctor's glasses flying off. That's just good comedy.

Panel four is a run-down of Superman's powers--interestingly enough, showing Clark out of costume in all three shots. This establishes the rules of the character--rules which, of course, would be stretched beyond all recognition within 20 years or so. I find it interesting that it mentions that "when maturity was reached" he found he could do these incredible things. The idea that Superman's powers developed slowly over time, only hitting their apex when he reached adulthood, was a cornerstone of the Man of Steel reboot, and has been a part of the mythos (to varying degrees) ever since, figuring heavily into "Smallville," for instance. I think the Silver Age focused more on the image of the infant holding up the chair, leading to stories of Superman as a boy and a baby, with the same powers he has as an adult. I like that the pendulum swung back the other way, toward the blurb atop this panel, though it seems to have found a bit of middle ground since the Byrne revamp. In any case, we establish that Superman can leap tall buildings in a single bound, lift giant weights, outrun a locomotive, and withstand the impact of anything less than a "bursting shell." Whether or not a bursting shell--or something more powerful--can actually hurt him is not, as I recall, directly addressed in these early issues, though I haven't read all of them.

It's worth noting how specific some of the ability descriptions are: "1/8 of a mile," "twenty-story building," etc. I'm reminded of the old Official Handbooks to the Marvel Universe, which delighted in such scientific-sounding minutia, explicitly describing characters' strength classes by how many tons they could lift. Some comic traditions are old.

Panel five drops Clark's first name, and it's a bit confusing, to be honest. I'll cut Siegel and Shuster some slack: this is their first big work, and they've been at it for years. They're naturally going to be more familiar with the character than their audience, and I think I blame that for this "calling the character by his first name as if the audience is already aware of what his name is" flub. Here, we get the briefest explanation of our protagonist's motives (good guy: check!), and the note that he's a hero by choice, from an early age. There's a part of me that's tickled by this, knowing that Superman started as a villain, but this also sets the stage for the strong sense of morals (which don't always jive with the law) possessed by our protagonist in the early years.

The next panel is a glimpse not only of the costume, but of the way the character would be narrated for decades. Compare "And so was created... [pause] SUPERMAN! Champion of the oppressed, the physical marvel who had sworn to devote his existence to helping those in need!" to "Look! Up in the sky. It's a bird. It's a plane. It's Superman! Yes, it's Superman — strange visitor from another planet who came to Earth with powers and abilities far beyond those of mortal men. Superman — who can change the course of mighty rivers, bend steel with his bare hands, and who, disguised as Clark Kent, mild-mannered reporter for a great metropolitan newspaper, fights a never-ending battle for Truth, Justice, and the American Way." It's exposition with its own climax and denouement.

I'll note in particular a phrase that you rarely hear about Superman anymore: "champion of the oppressed." At some point, I'd like to do some really deep research into the sociopolitical sentiment and cultural mores of the late 1930s, just to get a better idea of why the early Superman enemies were mostly crooked politicians and fatcats. There's something cathartic about that even now (and something very much in line with Jewish folklore), and I wish we saw a bit more of that in modern Superman comics. It'd be a great way around the problem of Superman's small and paltry rogues gallery if he spent more of his time righting social and political ills--without, say, taking a side in political issues. Corruption is corruption.

Finally, we have what I think is the most interesting part of this page, the most striking thing about what Siegel and Shuster thought was important to include: a justification for Superman's powers. The third panel explained the origin of his abilities (highly evolved/advanced biology), which would remain intact for some time thereafter, but this panel attempts to make those abilities seem less outlandish. I mentioned above that some comic tropes have a long history; this is one of them. This is "The Science of Superman" in 1938.

It's also one more reason I'd like to better understand the cultural milieu of the time. I've grown up in an era where superheroes are commonplace in fiction, where people bending steel and flying are a typical part of suspended disbelief. I've read before that either Siegel and Shuster thought the character might be too outlandish and unbelievable to be salable, or that they had a hard time selling the character for similar reasons. I don't know how true that is, but this panel seems like it's trying to preempt that sentiment. It also makes sense of why Superman's powers steadily grew over the next several years: if people were willing to accept a man who can jump an eighth of a mile, why not a little farther? Siegel, Shuster, and the other creators (along with the limitations of radio) pushed the boundaries of suspended disbelief slowly and steadily, until we had a minor god by the middle of the century.

I suspect the power creep--and the Comics Code, of course--is a major part of why Superman's enemies shifted from human ills to sci-fi/fantasy villains. When Superman can shatter planets, it suddenly seems a bit less like justice and more like bullying for him to lead socialites down into unsafe caves to teach them a lesson. Still, DC, if you're listening, I know I'd buy a regular series starring the Golden Age Superman in the '30s and '40s. Especially if Jon Bogdanove or Dave Bullock were drawing it. As long as you're doing this First Wave stuff, doesn't it just make sense?

So that's the beginning. Depending on how you count it, seven-ish panels to establish Superman as Clark Kent, champion of those who have none, to give him a tantalizingly brief backstory, and to explain and justify some of his amazing abilities. And this is how it would remain...until January 16, 1939. And until next week, Superfans!

I have nothing to add, but I just wanted to say that I'm excited for this series. And the first entry was great.