I've been enjoying Marvel's new Captain Marvel series, but for the book's run so far, my enjoyment has been largely in spite of the art. Dexter Soy has never seemed like a very good fit for the book's tone, and it was sometimes hard to follow the action, but I was getting used to it by the end there. I just read Captain Marvel #9 though, and I kind of wish Soy was back.

There's a definite stylization to Filipe Andrade's art, which could make the book more expressive and dynamic, and that's almost certainly what they're going for. It'd work, too, if it weren't quite so inconsistent. The character work is really ugly, with characters eyes sliding around their faces and whatnot. Most of the close-up shots are actually quite good, so I don't know if he was just rushed or what, but some panels make Carol look like a flounder or Sloth.

Andrade's art, at its best, reminds me of Humberto Ramos, and at worst, like the late Carlos Meglia, whose work on Superman in the early 2000s was some of the worst professional comics pencilling I can remember seeing. It had the same problems as Andrade's: inconsistent, deformed characters, unclear perspective (there's a panel in this Captain Marvel issue where Spider-Woman looks like she's been shrunk because there are no indicators that Capt. Marvel is meant to be closer to the reader), and visual continuity errors (besides the dramatically shifting size of Carol's tablet/phone in the early pages, there's the issue that since the redesign, Carol has had notably and intentionally short, and not flowing butt-length, hair).

To add insult to injury, on the last page Carol is told she has some kind of lesion on her brain, a ticking time bomb. And, well... 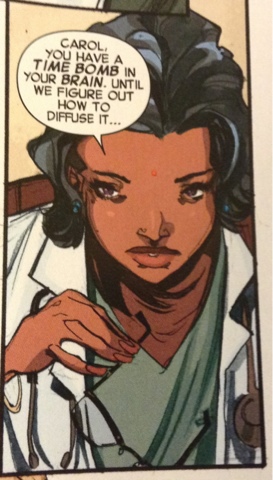 Look, it's a minor thing, but there's a writer, a letterer, and two editors working on this book. Somewhere along the line, someone should have noticed that a bomb is defused, not diffused. The goal with a bomb is to remove its fuse (literally or figuratively) so it won't blow up, to de-fuse it. The last thing you want is for it to be spread evenly throughout the area; in fact, diffusion of the bomb is what you're trying to prevent.

Altogether, the sloppy art and editing error make this book look rushed, which isn't totally surprising given Marvel's wacky scheduling antics. I can't speak for everyone, but I'd certainly be more happy with one polished issue a month than two or three that were rushed to meet an unreasonable deadline. Especially when they end up with the same cover price.

I hadn't noticed the spelling error, but I'd agree completely about Andrade's art. I thought some of the faces reminded me of Skottie Young's artwork, but without the panel-to-panel consistency, as you noted.

I'll also agree with you on Soy's artwork, though issue 8 was helped by someone else doing the coloring. Soy colored all his own work prior to that, and he opted to emphasize his thick lines and use dark or dull shades. Which gave everything a harsh look. It's hard to describe, but Soy's colors made the book feel grim, which doesn't fit DeConnick's writing. Gandini used a lot of warmer shades for issue 8, which gave the book a more pleasant feel.