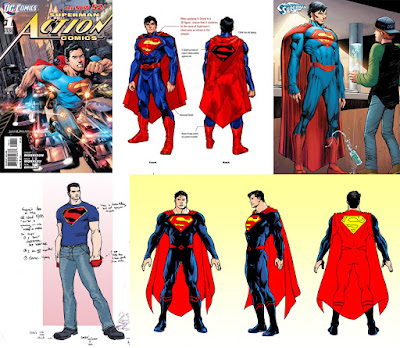 Even with the t-shirt and armor overlapping for the first few months of the New 52, this is the sixth costume in seven years, and that's indicative of the problems DC's had with Superman since the New Krypton saga at least, and arguably since the Death of Superman or even Crisis. Superman doesn't get new story arcs so much as new directions, and it's rare that any of these directions get a chance to breathe, let alone to see if they're successful. That third costume up there? Existed for five issues. The last two got nine months and eleven months, respectively.

These shifting costumes are a microcosm of the approach to Superman for the last several years of throwing a bunch of stuff at the wall and forgetting that you're supposed to wait and see what sticks. Nothing is given any room to breathe, and it's all worked out there on the page rather than behind the scenes. There's no courage here; every attempt to do something radically different is course-corrected back to something more (but not quite) traditional within a few months. There seems to be no comprehension about what works, in part because nothing is allowed to work before being changed again.

Take, for instance, the costume. Jim Lee designs the New 52 armor suit as part of an effort to make the Justice League look more uniform. It being Jim Lee, the costumes are all full of unnecessary lines, and things are changed with no apparent reason. Why does Superman need armor? Why would Superman's costume look like Aquaman's when they have independent origins? From any perspective, it's not a good costume. Getting rid of the trunks causes the costume to be this largely unbroken blue jumpsuit, and the red belt (why does he wear a belt with no trunks?) doesn't do enough to correct the color balance issues. Removing the yellow belt and yellow S-shield on the back means we have these two colors, yellow and black, that are only present in small amounts. The colors don't tie together in any sensible way. And then there's the boots, which were changed for no apparent reason. The costume's like a Superman figure kitbashed from some '90s ToyBiz X-Men toys. Oh, and the S-shield has a sharper shape.

So Romita redesigns it, getting rid of the armor and removing a lot of the unnecessary lines for more understated piping. The color and boot shapes return to a more classic look (though a quick glance at a cover gallery reveals that the darker blue color was anything but consistent on the armor), but the black S-shield on the cape and the high collar are retained. The sleeves get a little longer, but no longer have little S-shield shapes on them, nor does the belt. It's hard to say if the S-shield has reverted to the classic, more rounded form at this point, because Romita draws it differently anyway, and this costume didn't really stick around long enough for many other artists to tackle it. It's a step back toward the classic costume, with a couple of minor new features thrown in.

Skipping over the Truth outfit, we have a fairly big step toward the classic as the pre-New 52 Superman returns to the role. The original rounded S-shield has returned. The yellow cape shield is back, but so is the darker shade of blue (again, not at all consistently). The sleeves are shortened a bit from the Romita design, and incorporate the gauntlet-cuffs of the "Man of Steel" movie costume.  The reduction of the belt to shapes and the removal of the red boots seems like an attempt to lean into the field of blue, but the result is to further upset the color balance and make Superman look like he's wearing footie pajamas.

Then there's the new costume: 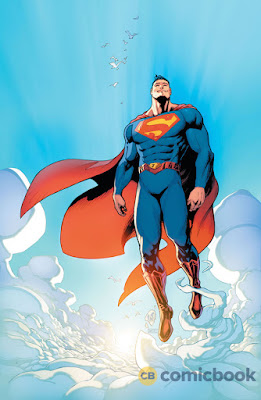 The classic boots are back, and freshly polished. The blue is back to that classic almost-teal. Still no trunks, but we're back to a full red belt, tacitly acknowledging the need to break up all that blue. More significantly, there's a yellow buckle on the belt, tying in the yellow elements of the S-shield in the way that the classic yellow belt did. The extra lines and Man of Steel-inspired cuffs are gone, as is the high collar. If you saw a waist-up shot of this, it'd be indistinguishable from the original costume.

So why even bother distinguishing it? This next Zenoesque step back toward the classic costume seems, as the overall trend does, to recognize that the old costume actually wasn't broken in the first place. Every element that Jim Lee changed has reverted, except that the original trunks and belt got exposed to white dwarf star radiation. If you're going to come this close to restoring the old costume, why not go all the way?

Especially when, as the trend suggests, Superman will either be back in jeans or wearing the classic suit within a year?

So, how about those jeans-and-t-shirt outfits? I don't think it's too outlandish to say that those have inspired the most positive reactions of this group of costumes, and I think it's notable that the only costume here that doesn't fit the trend of "more like the classic costume" is the one that's "more like the street-level Rags Morales costume." The reason for that, I think is twofold: first, it benefits in comparison to the regular Superman costume because it's not trying to be a variation on that. It's something different, and something that fits right in with key elements of Superman that go all the way back to 1938—namely, Superman as a farmboy and champion of the common man. Second, I think, is because they're tied to story ideas that have sociopolitical relevance in the way that DC/WB has been trying to achieve for Superman for a decade or more.

The Morrison/Morales Action Comics concept, going back to the days of Superman taking down corrupt businessmen and crooked politicians, resonated in the post-Occupy Wall Street world, and Pak/Kuder's depowered Superman standing with a marginalized community against militarized cops resonated in the Black Lives Matter aftermath. Those comics got media buzz and mainstream attention, so naturally the former shared shelf space with Superman against alien elementals in a story the writer disavowed and the latter gave way almost immediately to a story about chasing Vandal Savage with kryptonite powers.

David Mann has a great, insightful essay about how the Superman of "Man of Steel" and "Batman V. Superman" appeals to people because he's a decent person trapped in a crappy world that he can't meaningfully change, which is a feeling I sympathize with. That's certainly one way to find audience engagement, and like it or not, the powers that be over the DC movies seem to be sticking with it.

Contrast that with DC Comics, whose every movement towards that kind of audience engagement has been followed by a drastic shift to something else entirely. I don't know if it's Eddie Berganza or someone higher up, but someone at DC/WB lacks the courage to let Superman bust the heads of billionaires and racists for more than a couple of months. Let's make him a luchador instead.

The shifting costumes, and the two poles they indicate, represent the audiences DC is chasing: the people who don't see Superman as a character who's relevant to the modern world, and the people who want Superman to go back to what they remember from the glory days (whether that's the Silver Age, the Bronze Age, the '90s, or the Reeve films). I think there are people from both camps in the writers' rooms, and I think there's a considerable overlap between those groups. But in zigzagging between the two for six years, they've managed not to attract either, and they've wasted a lot of talent, buzz, time, and goodwill picking courses without sticking to them.

I'm cautiously optimistic about what's coming out of Superman Reborn, but if nothing else, I hope it represents DC picking a direction, for better or worse, and sticking with it for more than six months.


Addendum: I got 3/4 of the way through this post before remembering that Bryan Hitch also redesigned Superman's costume for JLA, bringing us up to one new costume every year.
Posted by Tom Foss at 11:07 AM

Wait, what are you talking about when you mention "...so naturally the former shared shelf space with Superman against alien elementals in a story the writer disavowed..."?