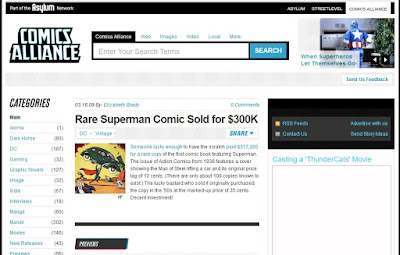 Seems like just yesterday that I was dusting the blog machine off to say farewell to one of my favorite long-running comics (and other stuff) blogs, Dave Ex Machina, and remarking how a lot of the bloggers from those old days left for bigger outlets. In reality, it was just over a year ago, and that post is still on the front page, if that gives you any indication about where I'm at with comics blogging.

One of those bigger outlets was Comics Alliance, where you could find Chris Sims, David Brothers, and David Wolkin, some of the comics blogging voices I most enjoyed following. Through CA, I discovered Chris Haley and Curt Franklin, I enjoyed thoughtful pieces by Matt Wilson and Ziah Grace and Kate Leth and Caleb Goellner and Andy Khouri and Joe Hughes and J. Caleb Mozzocco and David Uzumeri and Jennifer de Guzman and Dylan Todd and James Leask and Betty Felon and Luke Brown and Janelle Asselin and Andrew Wheeler and Katie Schenkel and Kieran Shiach and Elle Collins and pal Charlotte Finn and goddamn legend Laura Hudson and probably a dozen others I'm forgetting. It's the only comics website I have linked in my browser toolbar, and I still click it like four times a day without thinking about it.

Comics Alliance was different in a familiar way. The main page of Comics Alliance never read the way that the main pages of Newsarama or CBR do. It felt like a blog, with regular long-form posts on interesting and important subjects, alongside long-running features by creative bloggers with distinctive voices. Where other comics news outlets were shuttering blogs and shifting hard into news content, Comics Alliance went the other way, even covering news with biting commentary. It was this incredible Voltron of the things and people I loved about old-school comics blogging all in one place.

The people who made up Comics Alliance aren't gone, and many of the ones I mentioned have transferred to other projects already. It's a damn shame that talented, good-hearted people lost a source of income, and it's a damn shame that comics media lost a major source of thoughtful, socially-minded commentary. There are other outlets with similar worldviews, but nothing quite fills the niche that Comics Alliance filled. I'm going to miss that, but it's the little things I'll miss the most.

I'll miss David Uzumeri's Morrison annotations, even if it's been awhile since he did them. I'll miss Chris Sims's "Hedging Your Bets" and "Ask Chris," which I looked forward to every week. I'll miss Elle Collins's "Cast Party," which was always fun and thoughtful. I'll miss Collins and Katie Schenkel's "Together Breakfast" Steven Universe recaps, which I always went to right after catching an episode. I'll miss Charlotte Finn's "Lost in Transition," which didn't get a chance for enough entries. I'll miss Kieran Shiach's "This Magazine Kills Fascists," which was so important for the current political climate. I'll miss all the articles I was holding out on—the TV show recaps for series I haven't caught up on, like Riverdale and Supergirl, Charlotte's Transmetropolitan series and Sims's old Transformers series, which I haven't managed to read yet. I hope some of these series manage to continue in one place or another.

I don't know how to end this. I've realized recently that I'm not good with things ending. I've been reading the same comics and books, watching the same TV shows, playing with the same toys, since I was a kid. Those were the constants throughout my life. I moved around a lot as a kid, and I realized recently that the things that ended for me most commonly were friendships. I don't know if that's why I can't finish things or get hit so hard by things ending. But the end of Comics Alliance feels kind of like that. Like I've lost a friend.