I don't know what's weirder, that "All-Star Superman" is fourteen years old or that this blog is old enough that I commented on the first issue when it came out. But I figured if I'm going to use the origin here as a way to comment on the rest of them, it seems like a good choice to cover second. 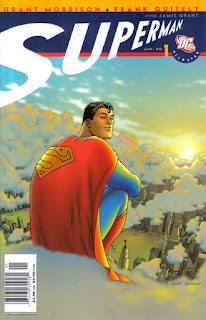 Key Elements: At first blush, there's not much to say here, right? This is the eight-word origin that's become so iconic that I'm using it as a shorthand for this whole project.  A planet is doomed. A pair of scientists watch their world crumble around them. A spaceship flies away from the rubble. A kindly couple in rural attire finds a red blanket in tall grass. And if we consider the two-page spread that follows, we see Superman, framed against the brightness of a yellow sun.

Interesting Deviations: Like Action Comics (vol. 1) #1, not much gets named specifically. No mention of Krypton or the names of those desperate scientists and kindly couple. Perhaps the most striking omission is that there's also no mention or even depiction of a baby. We know it's meant to be there because the story is so familiar that eight words can give us the basic jist, but leaving little baby Kal-El out of his own origin—not even depicting his little baby hands or anything in that first-person point-of-view fourth panel—is a bold and surprising move. I wonder how many people working just from memory would recall that the baby is never shown, and would instead conflate it with the similar first-person panels from Superman/Batman #1, which came out less than three years prior.

The passing motorist is cut out here, and the Kents are seen pretty explicitly discovering the baby, which has been the status quo since the Bronze Age or so. The plural "scientists" in reference to Jor-El and Lara is nice, subtly referencing that Lara was characterized as an astronaut back in the Silver Age, giving her science credentials separate from Jor-El's.

Additional Commentary: The explicit choice to include "last hope" in that short description hearkens back to Superman: Birthright, which established (for the first time, I think) that the S-shield is not just the crest of the House of El, but a Kryptonian glyph that stands for "hope." While Superman being the Last Son of Krypton and the last hope to save a dying people has been baked into the concept from the beginning, it's interesting to see an element from around two years before making it into this origin, however obliquely.

The Rocket: It's definitely different, but not particularly distinctive. It's got some of the starburst-shape that we'd see in the original Donner film and in Superman: Birthright, but otherwise it's just kind of gray. When we see Kryptonian architecture later in the series, it's all fluid crystal spires, and it would have been nice to see something more similar to that here.

One out of five exploding Kryptons for this one.