Guttor #5 - You Can't Do That on Television! 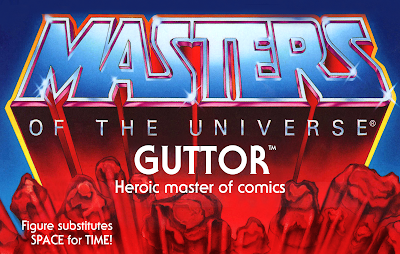 As someone whose main connection to the Masters of the Universe franchise is through the original cartoon, it was a breath of fresh air to be able to crack this first Marvel/Star issue and read dialogue that felt like it was in those familiar character voices. It's not completely consistent on that front, but the characters feel right to me in a way they didn't in the earlier stories.
But, like the DC Comics, this series exists in its own strange liminal space. Sure, it draws mostly from the cartoons in terms of characterization and design, but occasionally a location or a character looks like the toy version instead of the animated version.
This series started in 1986, while new episodes of He-Man and the Masters of the Universe had ceased production the year before, and instead She-Ra: Princess of Power was the spotlight series for new toys in the sibling lines. As a result, the new characters introduced in this Filmation-inspired setting—which is to say, the new toys that get a spotlight—are ones that only showed up on She-Ra's cartoon, if at all. Which results in strange things like stories that reference Etheria, She-Ra's adopted homeworld, but not the Princess of Power herself.
And, to be clear, that's how it was in the toy pack-in minicomics as well. Hordak and the Horde come from Etheria, but any other denizens of that world are unmentioned. That’s one of several reasons why this series feels like extended versions of the minicomics—right down to getting more creative with the storytelling and continuity just before they end.
The consequence is that characters like Hordak, Stonedar, and Rokkon get three separate introduction stories between the Marvel/Star comics, the minicomics, and their spotlight episode of She-Ra. Meanwhile, Extendar’s appearance in these pages feels like a follow-up to his minicomic origin.
Basically, if you think Donna Troy and Hawkman are complicated, try making sense out of He-Man’s continuity.
These first issues follow a story structure that would be familiar to viewers of the cartoon: there’s a scene early on with Prince Adam and Orko, where Orko demonstrates some childish character flaw, the inciting incident occurs, and then the resolution requires Orko to acknowledge and overcome his mistakes. With that in mind, these should go fairly quickly. 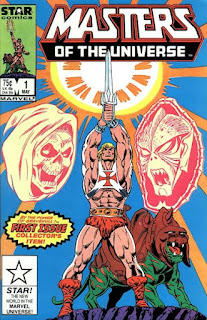 Issue #1 introduces us to Hordak, and does a pretty solid job of making Hordak seem like a serious threat—Skeletor is afraid of him, and decides he needs to break into Castle Grayskull so he can increase his power to keep Hordak away. To do this, he breaks out the Terror Claws! 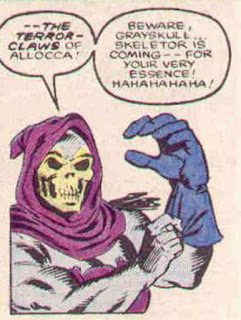 Which are considerably less impressive than their toy counterpart. 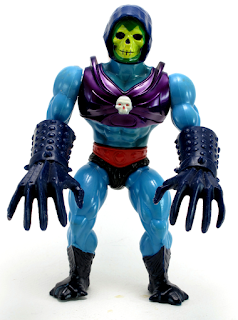 Though using them to basically try to dig through the wall of Grayskull like a skull-faced mole certainly is an interesting application of the accessory. 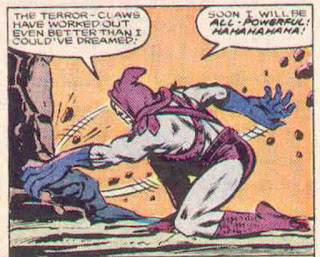 Meanwhile, Adam and Teela are training, and this is one of those instances where Adam is the one being irresponsible. Orko’s magic goes wrong, endangering Adam when he tried to help, but there’s no time to dwell on that because the Sorceress shows up in her guise as Zoar to summon He-Man. 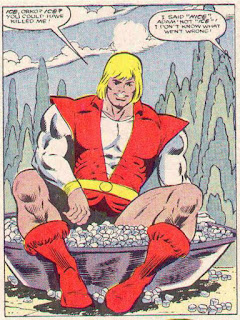 One thing that really stands out about Ron Wilson’s art in these issues is the transformation sequences; being freed from the confines of Filmation’s budget restrictions means we get to see new variations on the transformation, and every one of them is stunning. 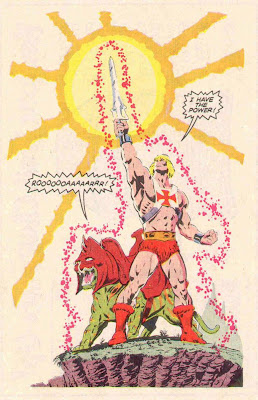 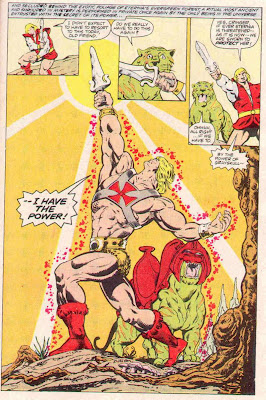 He-Man, Battle Cat, and Orko race to stop Skeletor, and the interaction is actually pretty good, with Skeletor treating He-Man as an annoyance rather than a threat. For once, his plan to take over Castle Grayskull isn’t so he can defeat He-Man, which changes the dynamic. 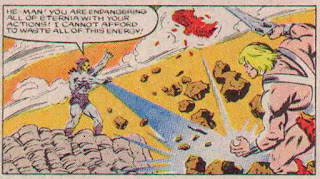 Skeletor manages to capture Zoar, and Orko uses a spell to summon additional help, which turns out to be exactly the boost Hordak needs to break through Skeletor’s protective magic. 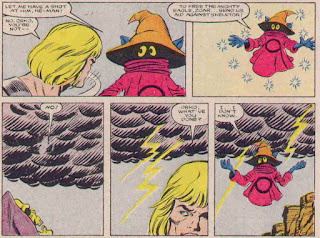 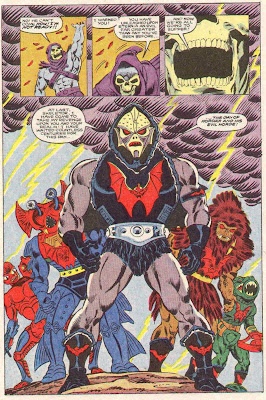 The Horde attacks He-Man and Skeletor, which puts them both in the unfortunate position of being on the same side. 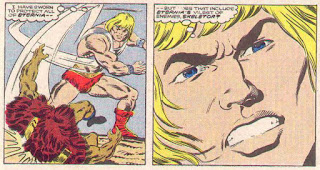 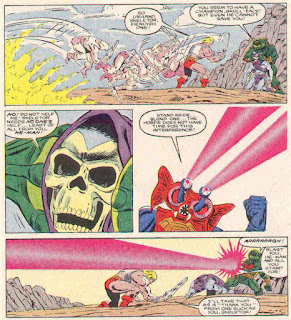 Orko eventually puts his spell from earlier to better use. 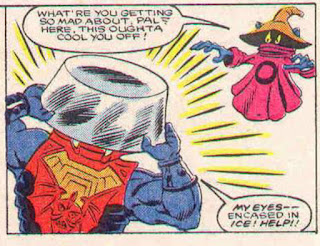 This is notable, because the structure of subsequent issues will make “Orko learns a lesson” pretty central to each plot, but it doesn’t quite gel here in that same way. We come back to his original problem here and at the end of the story, but not in a way that feels like a problem’s been resolved. 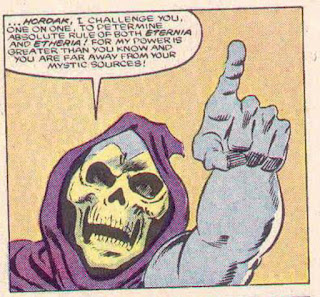 Skeletor challenges Hordak to one-on-one combat, so Hordak teleports everyone else to the prison in the Fright Zone on Etheria, where no one has ever gotten out alive! But apparently no one had thought to just cut through the wooden bars of the prison cell before.
It’s implied that maybe the further traps our heroes encounter are the really deadly threats, but they’re all dispatched fairly quickly, and then Orko teleports them back to Eternia.
Skeletor and Hordak battle… 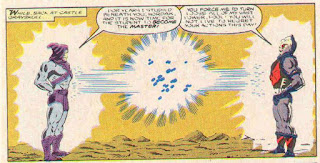 …but Hordak gets the upper hand, until our heroes—including a cavalry in the form of Man-at-Arms and Teela—arrive to turn the tides. 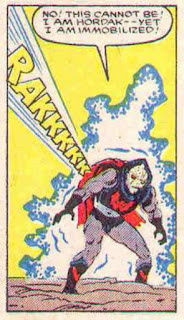 Hordak runs away, and Skeletor follows suit, but we haven’t seen the last of them. 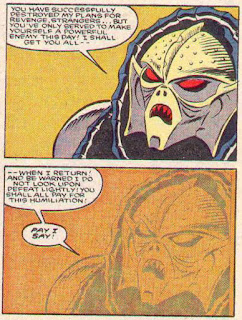 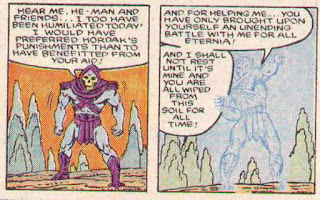 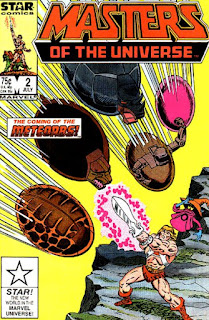 In issue #2, Orko screws around and causes the Laser Bolt (one of my personal favorite He-Man vehicles) to go haywire, which shoots a meteor out of the sky. Adam, Cringer, and Orko investigate, encountering the Evil Meteorbs for the first time.

It is wild to me that two entirely different toy companies decided in 1986 that the best way to compete with Transformers was to introduce figures that turned into rocks or eggs. Were the Rock Lords the direct inspiration for that scene in "Big" where they have a skyscraper Transformer? Both the Meteorbs and Rock Lords use Bandai figures, but He-Man's Rock Warriors are their own thing.
And the thing that Orko shot out of the sky is secretly the Rock Warrior Rokkon, a real "4:59 on Friday" name.

Turns out Rokkon, like Orko, just loves to fool around and have fun, and that's what got him hurt. He-Man sends the Rock Warriors and the Heroic Meteorbs to a rendezvous at the Palace, but Skeletor and the Evil Meteorbs are invisibly lying in wait, and attack the newcomers. They retaliate, thinking the attack came from the palace, and Man-at-Arms re-retaliates, escalating things until He-Man arrives. Neither side will relent until Rokkon and Orko use their combined abilities to reveal the actual threat, uniting the heroes against a common foe.
It's at this point that I should probably point out that all these rock creatures come from a planet they call Granite, which I have to imagine was only in order to make this joke: 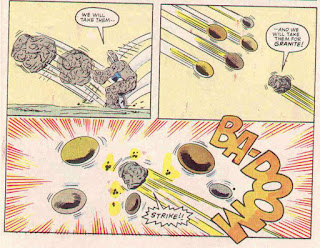 The villains are defeated, and we get a nice sitcom ending. 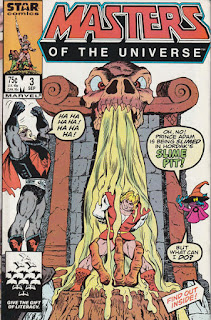 Issue #3, inexplicably titled "The Garden of Evil," begins with Adam and Orko sparring. Orko expresses jealousy about the Power Sword, especially after Adam is able to use it to turn his magic back on him. 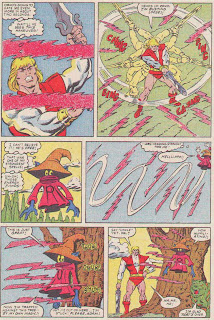 Meanwhile, Hordak is assembling an army of robotic Horde Troopers to travel to Eternia and bring back He-Man. Instead, they capture Adam, which leads to a very interesting scene that I don't think happens elsewhere in the mythos: 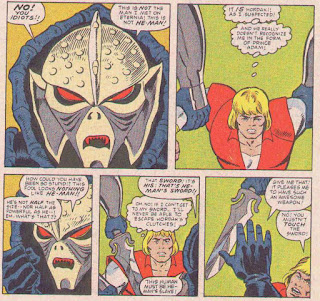 So, first, we have direct confirmation that despite appearing similar to the viewers, He-Man and Adam look nothing alike. But we also have confirmation that He-Man's sword is distinctive enough to be recognized by Hordak.
Back in the day, I proposed two different headcanons about these issues, the first somewhat tongue-in-cheek, the second very serious. For the first, I suggested that cultures on Eternia and Etheria both lacked commonplace stories about characters with secret identities, or even characters in disguise. For whatever reason, it just wasn't part of their shared story traditions. This would help to explain why every disguise on either world, no matter how flimsy, always seemed to be almost completely effective. It would also fit nicely with my belief that Queen Marlena definitely knew that Adam and He-Man were the same person, since she's from Earth where we are all about people in disguise.
The more serious theory is that the reason no one notices that He-Man and Prince Adam have the same sword is because the Sword of Power is so plain, like the Holy Grail in "Indiana Jones and the Last Crusade." While we don't see any swords exactly like He-Man's in the series, the basic sword design we frequently see is similar enough that you could understand why someone would mistake the two, especially if they've only seen it in fast-paced battle situations.

Hordak tries to take the sword, but it defends itself, so he sends Adam to the Slime Pit, a torture chamber where...eventually he'll be covered in slime! 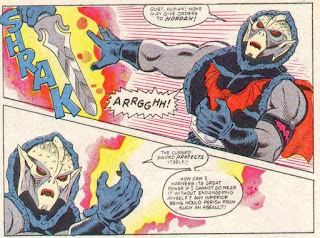 Like, the slime isn't poisonous or anything as far as I can tell. Adam just gets to experience what it's like to be to be on the Nickelodeon Kids Choice Awards. For comparison, here's what happens when He-Man gets slimed in the mini-comic: 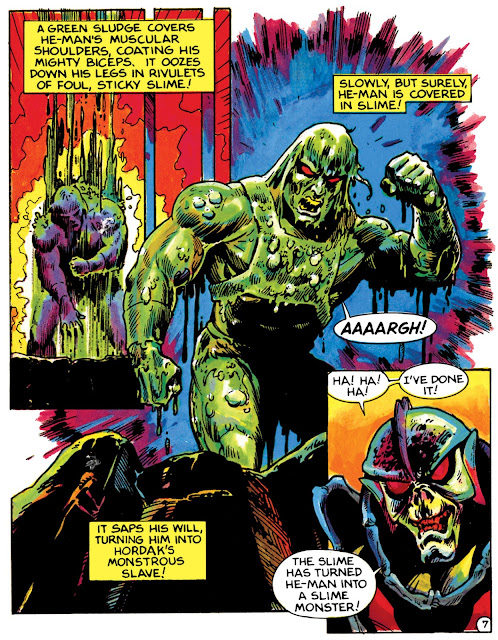 That red-eyed mind-controlled He-Zombie is burned into my brain. According to the footnote in the Mini-Comic Collection, this was the intent for victims of the Slime Pit.
Meanwhile, only Cringer and Orko know what's happened to Adam, but Orko knows that they don't need help to save him. They travel to Etheria and find Adam trapped, but Adam tries to warn Orko not to touch the sword. 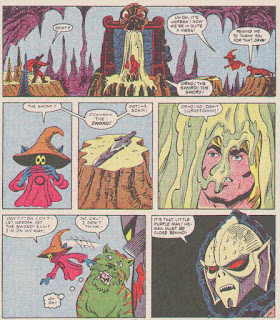 Orko, though, has other ideas...

...but instead he decides that his magic is good enough, and levitates the sword over to Adam, who gives very little thought to his secret identity. Or Cringer's, for that matter.

Not that it matters, because Hordak is kind of an idiot. He shows off a couple of additional toys, but there aren't enough pages left, so Orko teleports our heroes back to Eternia. He-Man compliments Orko on making a mature decision, and the story ends. 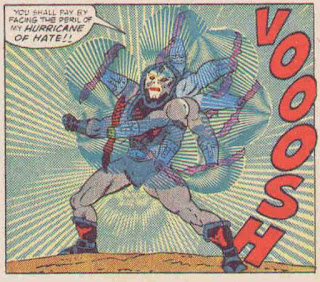 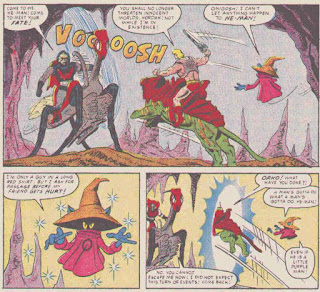 To sum up these first issues, I think the strong focus on spotlighting several specific toys each issue—the Terror Claws, Horde members, and Fright Zone in #1; the Rock Warriors, Meteorbs, and Laser Bolt in #2, and Hurricane Hordak, the Mantisaur, the Slime Pit, and Horde Troopers in #3—is a big part of what makes these stories feel more like the mini-comics than the cartoon. While the cartoon certainly existed to sell toys, most episodes were less transparent about it, or at least wove them into the plot more naturally. Some of that is down to the amount of space for storytelling, some of that is from animation budget restrictions that limited how many new designs a given story could have, but I think it ended up working in the show's favor.
Next time, issues #4-6!
Posted by Tom Foss at 11:00 AM