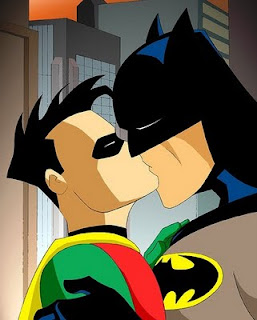 One thing I forgot to mention in the last post is another viable possibility1, a gay/bi Batman. Despite the jokes, I don't think there's any existing--or at least active or recent\--continuity where the evidence supports a gay Batman. It's something I'd be interested in reading (or writing, for that matter) as an Elseworlds or Earth-Whatever story.

In particular, I'm imagining a long-term (but ultimately not permanent) relationship between Batman and Superman (and before anyone mentions it, I'm aware of Midnighter and Apollo, but what I've read of The Authority hasn't really made me interested in reading more). It'd be an interesting mirror to modern portrayals of the World's Finest team, where despite initially distrusting each other and disliking each other's methods, they grow closer and forge a strong, solid friendship. In my scenario, they meet "on the job," and initiate the romantic relationship at the outset. The relationship would persist over the years, waxing and waning a bit in intensity, but ultimately ending with the duo having grown too far apart, having become too different to maintain the pairing. It wouldn't be a bitter ending--I don't think Justice League meetings would be particularly awkward--but it'd be an ending.

One interesting theme I think a story like that could explore would be the complicated politics of superhero dating--and the superhero "closet." It's one thing for people to realize (whether or not it was intentionally made public) that Batman and Superman were lovers; it's quite another for billionaire playboy Bruce Wayne to suddenly start dating farm-raised reporter Clark Kent. I think both would perceive the need to keep their relationship secret in order to preserve the masquerade. This would naturally cause tension, which would be a major contributing factor to the breakup.

There could be other intriguing elements as well...would this universe have a Robin? I envision a scene--a scene which ultimately leads to the "we need to keep this relationship a secret" talk--where Bruce and Clark are at the circus together, and Superman appears just in time to save the Graysons from falling to their deaths. Superman's sudden appearance in Gotham would raise questions, and with the papparazzi constantly hounding Bruce Wayne, it'd only be a matter of time before someone put the pieces together. Lois Lane's role in the story would necessarily be altered; while I think it'd be easy enough for her and Clark to develop the same friendly rivalry, once the news came out that Superman was the last homosexual of Krypton, I can imagine her putting the pieces of his identity together relatively quickly--unfettered by the blinders of unrequited love. Maybe there'd be the threat of a Lana Lang--or Pete Ross--tell-all book, revealing all of Clark's secrets to the public.

The more I think about this, the more ideas I get, and the more interesting I think this story could be. I guess this is how people become slash fic writers.

1. There's also the possibility that Batman is asexual, which again I don't think is
borne out by the evidence. It also would make the last couple of posts relatively short.
Posted by Tom Foss at 5:40 PM