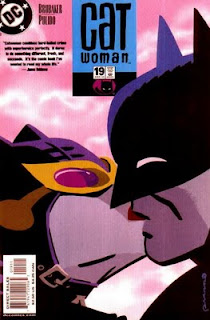 Weighing in on my own question, there's only one romantic interest I can see for Batman1: Catwoman. I suppose it's a bit pedestrian, but I think they belong together. In fact, about the only good thing to come out of "Hush" was the strengthening of their relationship and Selina learning Batman's identity. Hell, I was even able to swallow the most ridiculous aspects of "Heart of Hush"--including giving Hush a backstory that made him into Kenny Braverman--because of the Bat/Cat 'shipping.

But let me briefly run through my reasoning.

1. For the comic continuity, anyway. If we're talking about the Animated Universe, I'd say Wonder Woman--I thought their relationship (much like John and Shayera's) developed really well and really naturally.
2. Presupposing a world where "dressing up as a bat to fight crime as a way of coping with death" is a rational decision.
Posted by Tom Foss at 9:00 PM