As a comic fan, I expect to enter into any number of pointless conversations at any given moment, but especially at comic shops. And depending on the circumstances and content, I'm totally happy to jump into those conversations and have at it. There are some topics that I just stay away from in meatspace, unless it happens to be with friends.

One of those topics came up recently, when I was taking my brother to a semi-local comic shop. One of the shop's employees was talking to me as I browsed the TPB racks, and I chit-chatted in a friendly manner, right up until he got to that topic, at which point I got very engrossed in the racks and responded with absentminded "yeahs" and "mm-hmms."

The offending point? Paraphrased: 'I think Frank Miller really had the right idea; he just put Superman and Wonder Woman together. That's the way it should be, he should never have been with Lois Lane.' 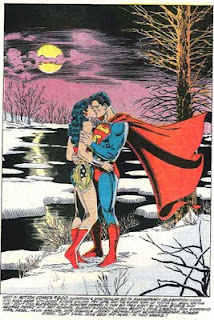 And what a common sentiment this is, that Superman and Wonder Woman should be together. And every time I hear this argument, I have to wonder: have you ever read a Superman or Wonder Woman comic book?

There's only one reason I can think of to pair the two up, and it's not a pleasant one. The only thing Superman and Wonder Woman really have in common is that they're both A-list superheroes with similar power sets. If anyone else has more to add there, feel free, but the only rationale I can figure is "stick with your own kind." I think this position not only shows a lack of knowledge of the characters (as well as a lack of knowledge of musical theater), but also a lack of respect for them, and a general lack of understanding how relationships work in reality.

Let's remember who we have here: on one hand, there's the farm-raised alien boy scout, who makes his living as an investigative journalist. On the other hand, there's the Amazon warrior princess who makes her living as a diplomat (and occasionally, as a secret agent). If it weren't for the fact that they both dress up in spandex and fight crime occasionally, they'd never even have met, let alone dated. People tend to enter into romantic relationships with people that they spend a lot of time with. Hence why Superman has consistently dated a hard-nosed city-girl reporter who works with him, and why Diana's notable love interests have been a pilot co-worker, a fellow peace activist, and a fellow secret agent. Even her short-lived relationship with Batman built out of working more and more closely over several story arcs. I just don't think Superman and Wonder Woman have enough in common to warrant such a relationship.

I think a lot of the problem I have with this is that it largely ignores who both characters are as people. One of the most important characteristics of Superman's personality, I think, is that he sees himself as a normal person; he self-identifies as a human. Given who he is, we'd expect him to fall in love with a normal woman.

Diana's position is similar; her origin story is about a young woman of privilege who wanted to be treated as an equal to everyone else, and to be the bridge between two disparate cultures. Given who she is, we would expect her to fall in love with a normal man.

For Superman and Wonder Woman to get together, it would require a rejection of these basic components of their characters. Instead of further connecting himself with humanity, Superman would be with a demigoddess from an isolationist nation; instead of interacting with man's world, Wonder Woman would be spending her life with another visitor to that world, another outsider. All on the basis that they share similar abilities, on the basis of the things which make them particularly special and set them apart from their peoples--the very same things that neither one wants to be judged by.

It's essentially "I want someone who loves me for who I am, not what I can do."

And when it all comes down to it, I don't think real people approach relationships this way--deciding who to date based on who appears to be the most similar in terms of abilities or looks. That completely ignores the roles of personality and proximity in partner selection, boiling everything down to a mechanistic trait-matching game. Or to simplify, Wonder Woman is not Maxima.

There's another issue I have with this position, though it may be less sinister than I suspect. I always hear it phrased as "Superman should be with Wonder Woman, not Lois Lane," and I think, "doesn't Wonder Woman have a say in this arrangement?" I never hear "Wonder Woman should be with Superman, not Steve Trevor"--though it's possible that Diana's traditional relationship is just not well-known enough, and it certainly hasn't been the status quo for over twenty years. Even so, the implication is that Lois Lane is somehow beneath Superman, unworthy of him, while Wonder Woman possesses whatever quality would make her a suitable mate for the great Man of Steel. The whole thing smacks of sexism, both because it makes Superman the only agent in the discussion, and because it treats these two women as if their only value is as a physical mate.

Wonder Woman and Superman may be many things, and may have been many things over the last six decades, but one thing I can't see them being is lovers.
Posted by Tom Foss at 1:39 PM

Now catching up over on this blog (in reverse order).

I think you've got a good handle on some bad shippers. I'm not as deep into the comic book world (mostly, I'm a fan of some of the good animated adaptations), but I've heard more than a few pairings based off the most trivial things. Super powers are one of the big ones used for that.

Superman and Wonder Woman just don't have any romantic chemistry in my mind, especially since I tend to favor the idea that Superman primarily thinks of himself as Clark Kent.