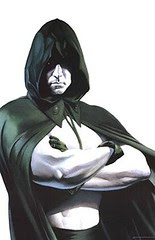 Backstory: The Spectre is God's spirit of vengeance, who is bound to a human host who can keep its terrible power under control. After its first host, police officer Jim Corrigan, was allowed to finally rest, former Green Lantern-turned-mass murderer-turned-sacrificial hero Hal Jordan took Corrigan's place. Now Hal's a Lantern again, and the Spectre's host-less and corrupted by fellow vengeance-spirit Eclipso.

Blue Beetle: The recently-deceased Ted Kord seems to be the obvious choice. The uproar over his death was more attention than the woefully-underused character has recieved in years, and it could certainly set the stage for his eventual return, as the position did for Hal Jordan. Then again, DC might not want the Spectre to look like the waiting room of resurrection. Either way, he's my pick for the new Spectre, and with the right writer playing off the difference between Kord's happy-go-lucky personality and the Spectre's relentless quest for divine retribution, a Beetle-Spectre series could easily be a superheroic Odd Couple. Throw in Booster Gold as a sidekick, and I'd certainly be buying it.

Booster Gold: Speaking of which, Booster's increased presence in the Countdown books has led to speculation that he's not long for this world either. I think he's a much worse fit for the Spectre's host than Beetle, even given their similar personalities. I could see it happening, but I don't want it to.

Sasha Bordeaux: For Hal Jordan, being the Spectre was supposed to redeem him for the slaughter of the GL Corps. If that sort of penance is true, than Sasha would certainly be a good choice. She's got quite a bit to atone for, at least in her own mind. I wouldn't be surprised if she kicked the bucket in the course of Checkmate's interrogation or something similar, and she'd be an obvious choice for Spectrehood. But, I tend to agree with those who think she's going to end up being the new Blue Beetle.

Sue Dibny: Boy, wouldn't that be in bad taste? I can't believe they'd do that.

Nightmaster: He really hasn't had enough of a role in Day of Vengeance to warrant being the new Spectre. The only reason I'd name him over Blue Devil and Ragman is that they're too cool to waste on being Spectre-hosts.

That little girl who was in the new Day of Vengeance: I guess that's what they're trying for, right? Either she's supposed to host, or she's somehow related to Jim Corrigan, or something. We're only three less-than-entirely-memorable issues into Day of Vengeance, so there's plenty of time left for twists and turns.

He has already started wearing a hood :).