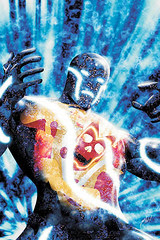 I haven't read Firestorm #15 yet, though I did kind of flip through it. This post is really more about the Firestorm series as a whole than about any specific issue.

I'll be honest: a good deal of the reason that I was reading Firestorm from the start is because I wanted to find out what happened to perpetually well-dressed Ronnie Raymond. I like Ronnie Raymond, I didn't see the need for his departure as Firestorm (and did they ever explain why he lost his powers back in JLA: Trial by Fire?). But, Jason Rusch had some interesting traits and problems, with an interesting spin on the Firestorm abilities. While Ronnie Raymond originally had to combine with Prof. Stein to form the Nuclear Man, Jason could combine with anyone, but apparently only for short periods of time, or they would suffer various problems.

Now, this had potential for some cool stories, but the potential was almost completely wasted. There's the one where he merges with the guy who tried to kill him, but when they separate, he turns to mush. There's the one where the guy he merges with takes over, and Jason loses a hand or something, and then it crossed over into Bloodhound and I never saw how that story ended. Then, there were a bunch of random "oh, cool, we're flying, this is cool!" mergers. 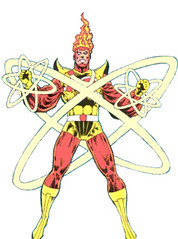 So, when they introduced Ronnie Raymond as the "new Prof. Stein," a constant companion to Jason, who could take over at will (another new spin on the concept), I was thrilled. Clearly, this represented an interesting use of the new twist on Jason's powers, and character growth for Ronnie in the process.

So they "killed" Ronnie again. Why did they have to do that, honestly? It has zero permanence, and the writer knows it. Rather than give Ronnie and Jason both a chance for growth, Jason gets to take on Ronnie's old status quo. Now he doesn't have to combine with anyone.

Some reviewer called this a rejection of the only thing that made the new series interesting, and I disagree. The combination gimmick was a plot waiting to happen that never really manifested.

So, where does that leave us? Ronnie's gone for an unspecified period of time, and Jason's not appreciably different from the more recent Ronnie in any way whatsoever. The stories haven't been memorable, and Jason comes across as a more morally ambiguous Peter Parker. Fourteen issues of relative stagnation.

Jason-Firestorm would have been better off to embrace Ronnie's allies as wholly as he has Ronnie's rogues gallery. If the book had played off more like James Robinson's Starman, or even the Flash or the early Kyle Rayner Green Lantern comics, where the dynasty (small though the Firestorm dynasty is) plays a big role in the development of the newest member, then it could have been fantastic. Is it any wonder that the Ronnie Raymond issues, which featured little-seen Firestorm sidekick Firehawk, were the best of the series? 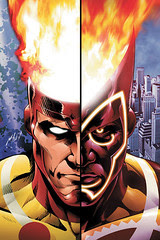 Here's my pitch: Jason remains the primary component of Firestorm, but Ronnie is his constant Stein-esque companion/mentor, who can take over the Firestorm body at will. Firehawk pals around with Firestorm, ostensibly to help train Jason, but really because she wants to be closer to Ronnie, for whom she still harbors some romantic inclinations. Jason begins spending more time with Ronnie's father, who wants to bond with his disembodied son, but he and Jason actually start forming a parental relationship. Throw in the godlike fire elemental Professor Stein, and you've got a diverse, conflict-rich, and interesting supporting cast.

Which is, unfortunately, much more than Firestorm seems to have right now. Easily the least memorable series on my pull bag.
Posted by Tom Foss at 1:15 PM