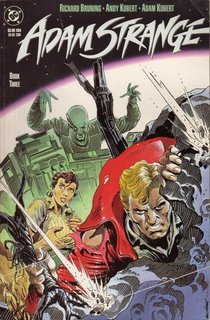 I wish I'd been warned about Adam Strange: Man of Two Worlds.

Admittedly, I didn't look at any reviews or anything. It's a graphic novel about Adam Strange! How could it possibly be bad?

I thank my lucky stars (and garters!) that I didn't pay nearly the $20 cover price, and that it's really pretty, because the story starts off interesting and plunges into awful.

The rundown: Adam Strange, shortly after Swamp Thing's trip to Rann and his wife Alanna's successful conception, is finally getting a chance to stay with his wife (and eventually, child) permanently, because Sardath's Mega-Zeta-Beam will not wear off like regular Zeta-Radiation. So in his last days on Earth, Adam clears up the last of his business with the planet. He visits his sister and his dying father, reluctantly reveals the whole truth about his travels, and is dismissed as insane. He ends up getting drunk and having a heart-to-heart with his father's doctor, Eve Fox. Their night ends with light infidelity (fondling mostly, and a kiss the next day) and the revelation of Adam's father's death.
Adam leaves on the Mega-Zeta-Beam the next day. It causes him extreme, unexpected pain, and an inexplicable hallucination of Sardath killing his child because it was deformed, and raping Alanna. He arrives on Rann, out of this hallucination, and enraged, and ends up seriously injuring Sardath (putting his eye out), and being attacked by the police. Adam runs as he becomes lucid again, but he is now a fugitive.
Meanwhile, Sardath is comatose, and the power vacuum allows political tensions and the threat of invasion to come to a head. Adam Strange is needed more than ever.
Adam runs through the barren wastes of Rann, remarking how sad it was that Swamp Thing’s attempt to regenerate life on the world didn’t work. This is fairly odd, given that it quite clearly had worked by the end of Alec’s visit to Rann. No matter, though, as Adam comes upon a verdant valley filled with plants that bear Swamp Thing’s face. For some reason.
There’s a commune in this valley, exiled from Ranagar for various reasons, who have assimilated Swamp Thing into their religion as some sort of reborn god. Also, unlike everyone else on Rann, these folks appear to be sexually potent, and one of their number is soon to give birth. Among these villagers is Bantteir, Alanna’s long-estranged mother. Who has Wolverine’s hair.
Meanwhile on Earth, Eve Fox searches through Adam’s house and notes, discovering his Zeta beam schedule, which has a last entry in Rio de Janeiro, Brazil. She decides to go after him, making her the most stalkeriffic one-night-stand of all time. Naturally, she accidentally intercepts a second Mega-Zeta-Beam, and winds up on Rann in the middle of an invasion. Alanna starts going into premature labor, due to the various stresses; Dr. Fox tends to her, and Adam arrives in a bright red trenchcoat, desperately trying to explain himself.
Oh, and Sardath wakes up, with a cybernetic eye and a heavy dose of crazy.
Long story short: Alanna dies in childbirth, but her daughter Aleea is all right. To save Ranagar from the invaders, nutjob Sardath creates a device that surrounds the city in an egg-shaped forcefield, and the entire city leaves the planet. Adam grieves for his lost wife, but Eve Fox convinces him to move on and care for his daughter. Adam. And. Eve.

So, Bruning takes everything that made Adam Strange interesting and removes it, so he can make a heavy-handed Genesis allegory. Who thought that this was a good idea?

The Analysis: Adam Strange comes from Earth, a planet teeming with life. He is tempted by a woman named Eve, and he tastes of the "forbidden fruit" of a short extramarital affair. He voluntarily banishes himself from this planet of life for a world of death and decay, Rann. The Eden parallels are clear. Adam has left a paradise to live in a less certain world, filled with unknown dangers and the possibility of death.
But then, he discovers that Rann itself is becoming a paradise. Swamp Thing's actions have brought life to the planet once more. Eve arrives, unwillingly banished from Earth, in part because she chased after Adam to again find that "forbidden fruit." This leads to Ranagar, still lifeless and bleak, to exile itself from the newly-resurrected Rann. Adam and Eve must repopulate the lifeless Ranagar-egg.

I thought I had more analysis, but that really ends up being the depth of the story. Adam Strange gives up two paradises, one voluntarily, one involuntarily, so that Bruning can turn him into a lame "first man" allegory. He essentially makes Adam into a completely different character by removing every single defining characteristic of his story. Zeta transport? Gone. Otherworldly girlfriend/wife? Gone. Planet full of monsters and danger? Gone. Old-school spacesuit, jetpack and blaster? Gone. What's left?

I'll get into what Adam Strange ought to be like in the next "Comics I'd Write for Free."

The best part of Adam Strange: Man of Two Worlds is that it made me appreciate Mark Waid's two-part JLA issue that featured Adam Strange. Sure, those issues have awful art, and they're among the worst of the Morrison era (though not the worst), but I never realized what their purpose was. I didn't see what sense there was in kidnapping Alanna and making Adam play crazy. Now, I see that Waid was just undoing all the damage that Bruning had done. It was continuity-necessitated story, and those rarely turn out well. Waid did pretty well, given how much he had to fix. I now appreciate that story much more than I had previously. So, thanks for that much, Richard Bruning.

Good review Tom. I agree on all points. I too was sucked in just because it was Adam Strange and the pictures were pretty. But I was revolted by yet another Silver Age icon being reconstructed as a grim and gritty pile of crap!
I'd be interested in your opinion of the newest Adam Strange mini series.