The B-52s' perennial classic "Love Shack" is at worst a sentence fragment and at best an unfinished conditional statement. It starts out by saying "If you see a faded sign at the side of the road that says fifteen miles to the Love Shack," but never balances that with a "then" statement. It never tells us what to do if we see that sign. Do we continue driving? Do we turn at the light? Have we missed it inadvertently?

It's thoughts like these that keep me up at night.
Which has had more different interpretations, the nature of the Donald Blake/Thor relationship, or the nature of the Anti-Life Equation?
I simply can't imagine what would have given me such an idea, but I started buying Manhunter. I picked up the trade (issues 1-5), got issues 6-9 and 20-22 reserved at my shop, and found 13, 14, 16-19, and 23 at another store. Which leaves 10-12 and 15 yet to be found. And oh, they will be found. No Manhunter escapes this man.

My favorite thing about the series? Reason #4, Dylan Battles. 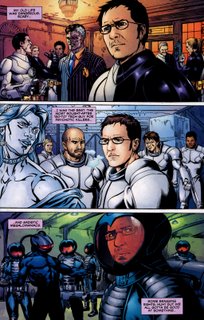 Dylan was a professional henchman. That is awesome.

Read Manhunter.
The (walking on, walking on) "broken glass" reference was to an Upright Citizens Brigade skit. I haven't seen many episodes of the show, but what I have seen is brilliant.
My only experience with the comics' Copperhead is from Manhunter and Chase, so I've never seen him in-comic with the outfit he has in the Justice League cartoon. This is too bad, because I really like that costume.
But, this week's 52 has a female Cobra character (according to Stephen Wacker) who sure looks a lot like the animated Copperhead. Seeing that got me to thinking: why is it that, as soon as a male superhero's costume is empty, one of the first thoughts is to put a female character into it? Sure, this Cobra isn't Copperhead, but she looks pretty close, and the trend is everywhere, and it certainly doesn't go both ways. Here's my quick list of the ladies who have raided male heroes' closets.


And of course, I'm blanking now, after coming up with a dozen or so in the car earlier. I realize that Spider-Girl and Kid Flash are from alternate futures, but they both have spent enough time in comics to be at least considered in the list. Venom was originally supposed to be a woman, who would have been aping Spider-Man's black duds. Wish I could remember the other ones I thought of.

Of course, it's a lot easier to come up with the characters who took a male character's name and altered the costume. Eclipso, Scorpion, Captain Marvel II (Monica Rambeau), Nova (Frankie Raye), etc. Who can I add to the list(s)?
If I ever do a high school movie where they have a big choreographed number during the Prom or other big dance, it's going to be to "Love Shack," grammatical concerns aside. I even know how it's going to go.

the 2nd yellowjacket.. the one who was killed in the crossing?

Wildcat and Dr. Light during the first crisis were gender-swapped.

Azteka, in the Rock of Ages future, anyway.

Just your friendly neighborhood library nerd checking in here:
52 comes before 1602 since the latter is a unit and not a series of 4 unrelated numbers.
JLA, Justice League America, Justice League of America - if they're just 3 names for the same thing, then file all of them under whichever one is considered the 'main' name, and then just file them in issue order (or whatever your next criterion down the list is).

I may not know anything about comics, but I do know filing.

Joncormier: good, I somehow hadn't thought of them.

Jon: The only problem I had with Star, at least, what kept her off the first list, was that her costume was different from Sylvester's. She works on the second one, though. Azteka is a good one.

Chiming in to agree with philosophizer ...

The JLA/Justice League conundrum is a little harder, because of the JLI/JLE split. I would have the first series, then JLI/JLA, THEN JLE, then the 1996 series, and lastly, this new one. JLA Classified comes after that. Any specials come after that. But that's just me.

Courtney Whitmore's costume is actually based on Yankee Poodle's, from Captain Carrot and his Amazing Zoo Crew. But Yankee Poodle was a girl, so I guess that doesn't count.