My best story from the con

As we told people repeatedly over the course of the weekend, Stand-Up Comics is one of only three authorized Homestar Runner resellers in Illinois. Apparently we were also the only ones on the floor at the Rosemont Convention Center. The Homestar Runner merchandise probably garnered the most attention from passers-by, and by Sunday night we'd sold out of all of it except some keychains and two t-shirts.

But on Thursday night we still had plenty of Kick the Cheat plushes and Strong Bad DVD sets. Things were winding down on the first night (which was limited admission, as I recall) when a dark-haired young man, maybe twelve or thirteen, came up with his dad to admire our Homestar Runner stuff. Eric and I chatted with him a bit about the online cartoons, while his dad took a look through the open back-issue box with all the Legion of Super-Heroes comics.

Eric, always the helpful one, told him that it was a stack of Drawerboxes, in case he was looking for something specific. I coyly said "something tells me he's a Legion fan."

See, what Eric failed to notice was that our browser was this guy: 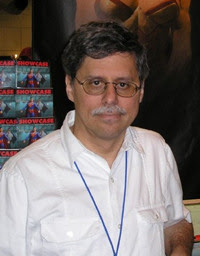 DC Comics President Paul Levitz
He chuckled softly and said "No, just an old Legion writer looking..." and I didn't quite catch the last bit of what he said. He and Garret stuck around for a little bit longer, then left to walk around the con once more.

And that's my coolest story from the convention this year. Thanks, Levitz family!

Oh, and Rob Liefeld thumbed through our Star Wars figures. But that's not nearly as interesting.

That is just too cool for words.

around 1976 or so I sold a Donald Duck watch to Paul Levitz at the Comicon in Chicago. I was about 15 and working the booth with a dealer who was a friend of my dad's. My boss was kinda mad that I didnt check his ID when he gave me a check, that I just said I knew who he was. I presume the check cleared.