I've been wracking my brain, trying to figure out if I've ever dropped a book based on the solicitation before. I don't think I have, but it's possible. In any case, as of this week I've done it at least once, with Superman/Batman #50.

In case you don't remember, the solicitation text for said issue was the following: 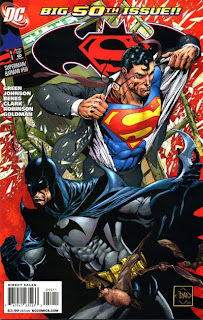 SUPERMAN/BATMAN #50
Written by Michael Green & Mike Johnson
Art by Ed Benes
Cover by Ethan Van Sciver
Variant cover by Ed McGuinness & Dexter Vines
Celebrate fifty blockbuster issues with this extra-sized extravaganza as we reveal the untold tale of Thomas Wayne’s meeting with Jor-El and how it shaped Gotham City’s future! You don’t dare miss this one!
The past was just prologue for this latest adventure of the World’s Finest duo as an ancient Kryptonian artifact is uncovered, unleashing past and present dangers that may alter the duo’s future. Not even the guest-starring Titans will be able to save them! This issue also features a variant cover by the original SUPERMAN/BATMAN art team of Ed McGuinness & Dexter Vines!
Retailers please note: This issue will ship with two covers. For every 10 copies of the Standard Edition (with a cover by Ethan Van Sciver), retailers may order one copy of the Variant Edition (with a cover by Ed McGuinness & Dexter Vines). Please see the Previews Order Form for more information.
On sale July 23 • 48 pg, FC, $3.99 US

I called up my shop on Wednesday, after seeing that this book had been released, and reminded them to pull the abomination out of my stack.

And then, masochist that I am, I bought it anyway. But for the second time in the series 50-issue run, I've dropped my subscription to Superman/Batman, and it's going to take a lot to get me back.

It's no shock that I came into this issue with certain preconceptions--namely, that the idea of Thomas Wayne meeting Jor-El is absolutely frigging stupid.

And in that regard, the issue didn't disappoint. It was precisely as inane and nonsensical as it said on the tin, if not moreso. And I say that as someone who enjoyed the idea of "Kryptonite Doomsday" enough to buy up the whole previous arc, which I thought was pretty good (especially for "Superman/Batman").

Here's the basic plot run-down: we open on Thomas and Martha Wayne driving through Kansas, discussing baby names (Thomas is sure they're going to have a daughter). They see a light in the sky which crashes down in a field off the side of the road. Naturally, Thomas stops the car and goes to look at it, finding a crystalline probe, which he naturally reaches out to touch. There's a flash of light.

In the present day, Batman, Superman, and the Justice League are rebuilding Smallville after Kryptonite Doomsday's rampage from the previous issue. You know, for a small town in the middle of Kansas, Smallville gets destroyed an awful lot, especially when most of the attacks aren't even done with the knowledge that it's Superman's hometown. There are a few little gags thrown in, some of which work, some fall flat (yes, Michael Green and Mike Johnson, we've all seen that Jim Croce song referenced in Superman before). While Batman and Superman's internal monologues highlight just how different Smallville and Gotham are, some kid comes up to Superman with a metal doohickey that they found while picking up. It activates when Superman touches it, which in turn wakes up a giant robot which had apparently been stored in a box in the Batcave. Batman gets an alert from Alfred and takes off in his plane, arriving to discover that all the technology in the cave has been removed. A distress signal from Nightwing confirms that he (and the Titans) are being attacked by the Borg-Batcave.

We cut to the battle, where Cyborg promptly gets assimilated and begins speaking in Kryptonese. Superman shows up on the scene, Kryptonese apparently being like a dog whistle to him, and destroys the animated majority of Batman's crimefighting arsenal. The Wayne Enterprises accountants are going to have a field day. Superman picks up a shard of...something...that "looks just like the crystals in the Fortress" (except it's yellow, and the Fortress is white/blue...I guess colors could escape a guy who can see the whole electromagnetic spectrum). Batman reaches out to touch it, and there's another flash (technically, a "FWWAAAASHH").

We find Thomas Wayne, standing awestruck, on Krypton. Crystal spires, symbol-emblazoned banners, and a big red sun in the sky. He's accosted by police officers, but Jor-El shows up and calls them off. Superdad takes Batdad back to his home in a vehicle that looks an awful lot like the DeLorean from "Back to the Future II." I did say this was a "brief" recap, didn't I? Oh well, anyway, the World's Finest Dead Dads chat about their unborn children, Jor-El muses about worlds he could send his son to, and eventually Thomas convinces him to send Kal-El to Earth. Superman and Batman wake up and independently verify (through the Fortress computer and Thomas Wayne's hidden journal) that their vision was of real events and their dads actually met. Tom Wayne explains that he spent years tinkering with Jor-El's probe in secret, and used the technological advances gleaned from it to bring Wayne Enterprises back from the brink of bankruptcy, then buried it in the cave; Jor-El gives a fairly stock speech about how he hopes Kal will grow up with a good family and eat his vegetables or something. Superman and Batman get together, profoundly altered by their experiences, and...scene.

I don't even know where to begin. Can I put out the call to writers everywhere that we need to sweep this into the dustbin of forgotten continuity until Grant Morrison III digs it out and tells confusing stories about it in 2057?

First, Thomas Wayne was a medical doctor. How on Earth was he supposed to be able to dissect and understand advanced Kryptonian technology? Why didn't Batman, the world's greatest detective ever wonder how his company managed to bounce back from bankruptcy right before his birth? Why didn't he notice the sudden influx of amazing technology from an unknown internal source at about that time? If Thomas Wayne buried the probe in the cave (along with his journal, explaining it), why was the crate containing both things just sitting out in front of other crates on the floor of the Batcave? It's not like it broke out of a wall somewhere, it was sitting more or less on top, like it had just been put there. Apparently, the World's Greatest Detective has never noticed the strange crate sitting across from the giant dinosaur. But Alfred's kept it in tip-top condition; there' not even any fading on the warning stickers.

Meanwhile, this really implies that Jor-El had an awful lot of foresight. His son's not yet born, but the rocket's ready and he's picked out a planet to point it at. It's implied that he sent the probe years before Clark's rocket (although that bit is questionable; it's not clear how old he imagined Clark would be before he found said probe). Even so, with all that time, why couldn't he build a slightly bigger ship? You know, maybe send a couple more kids with? Or his wife? He tells Thomas Wayne that Kal will be "the only survivor of Krypton," but with that much time, he could have probably rectified that. Maybe given a bit more of a hand to his brother and niece, who actually believe his theories about Krypton's destruction. Maybe it's just me, but I always thought that the somewhat rushed nature of Superman's survival was somewhat key to the story; it provides a reason for a wide variety of questions that are raised by the whole situation. When he knows this far in advance--not only that Krypton is dying, but that he's going to send Kal and Kal alone away from the planet--it makes him look like kind of a dick. I guess it runs in the family.

There are other problems with the story; having Batman walking around in the daylight in Smallville suggests that he's not even trying to keep up the whole "urban legend" thing anymore. The interactions between the Titans ring hollow, both of the battles (the animated Batcave and some villain holograms in the Fortress) feel totally tacked-on and unnecessary; the latter one is barely even justified. And the whole issue is a sequence of unlikely all-too-convenient events leading one into the other. The entire issue is one big string of "Really? Really?"

And the last act is devoted to refuting the possibility that this is just a dream or a hallucination or a simulation by the probe, as if to say "please, please don't render this discontinuity, it actually happened! I mean it!" When the last third of your story exists primarily to justify the ridiculousness of the first two-thirds, it tends to be a bad sign.

I'd tell you to avoid "Superman/Batman," but I have a feeling that that's not novel advice.
Posted by Tom Foss at 4:06 PM

yeah. Cripes, it's like the worst part of the Silver Age, where everyone is intimately connected from pre-history to the far future and met 50 times as children before they teamed up as adults.

Meh. I liked the version where Jack "Starman" Knight went back in time and convinced Jor-El to send his kid to Earth better.

I agree with Sleestak
It reminded me of those silly Superlad (can I legally say the proper name?) stories where he had a "time viewer" of future events.
Did he ever warn young Bruce Wayne that his parents were to be brutally murdered.
My complaint being is Superlad meeting young Bruce. Did everyone have to meet as boys to be friends as men????
It's like a story where Lois Lane visited Smallville as a young girl.
WHY????
Is Smallville that pupular?
Superlad met a young Green Arrow too I think. Was that necessary?

I too enjoyed the Kryptonite arc but hated this story. There is no consistency concerning Thomas Wayne anymore. Grant Morrison is deconstructing him (or appears to be) in Batman R.I.P. Why?
Even if it's a hoax can't they leave Thomas Wayne alone?

Marvel ruined the memory of Uncle Ben last year having an alternate universe Ben Parker being a cold blooded killer.

Now Thomas Wayne is either reverse engineering Kryptonian science OR secretly a drug addict and evil man.
Which is it?

The entire run of Superman/Batman seems like one big string of "Really? Really?" sometimes.

The entire Jeph Loeb-sans-Tim Sale oeuvre often has that feel for me - like Imaginary Stories where they forget to put in the bit about how it *is* all a dream, hoax, or Imaginary Story....

One can easily imagine the community of professional acrobats/carnies/circus folk being a rather small one where they'd definitely know each other, or at least know *of* each other.