December with the Doctor: Monk-y Business 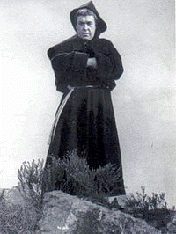 The former has been touched on a few times, here and there. In "Father's Day," the Doctor says/suggests that the Time Lords kept the Reapers from entering the timestream. In "Rise of the Cybermen," the Doctor suggested that the Time Lords made it easier to travel between alternate universes. In "The Waters of Mars," the most recent special, the Doctor takes charge of the laws of time, attempting to alter even a fixed point in time without a Time Lord infrastructure to stop him.

The nice thing about this is that it's given us some idea about what the Time Lords actually did, besides generally practicing a doctrine of noninterference--except when it came to the Doctor, where they were mostly bureaucratic obstructions. I'd like to see more of this kind of thing, if the status quo is to remain as it is, with only one2 remaining Time Lord.

However, one of the biggest sources of rumor-fuel has been new showrunner Steven Moffat's "THEY'RE BACK" comment, which could be referring to any number of things--his Weeping Angels, River Song and Jenny, the Daleks (possibly in older-series style), the original Cybermen, (highlight for potential spoiler) if pictures of shooting are accurate, the Silurians, and the Time Lords. If the latter is the case, I think I'd rather see a slow trickle of Time Lord revivals than a full-fledged restoration of Gallifrey and such.

And if we're going to have a slow trickle of Time Lords, the first one I want to see is the Monk, from the First Doctor serial "The Time Meddler." I've been reluctant to watch some of the older Doctors' serials, knowing that they tended to be padded out, and knowing that the low-budget cheese factor would be at a maximum. But I thought it'd be interesting to see our first glimpse of another Time Lord (Susan excluded), and I wasn't disappointed. I'm not going to review the episode--it's entertaining, showcasing the Doctor's cleverness and recklessness in a way that would stick with the series for the duration. It also worked in some history about William the Conqueror's invasion in 1066, as a reminder that the show started out as an educational series.

And this is where the Monk becomes really interesting; his reason for being at the Battle of Hastings is to supply future technology and knowhow to the Saxons in order to defeat the invading Vikings and win the inevitable battle--all for his own personal gain, apparently. The Monk is one of those rare Doctor Who characters whose alterations to the timeline have apparently been necessary for time to go ahead as expected3--he helped build Stonehenge with antigravity devices, he met with Leonardo da Vinci (doesn't everyone?) regarding powered flight, and he's taken advantage of compound interest like a certain Philip J. Fry.

And this is what I find so compelling about the Monk: he's out for himself, but he's not particularly destructive like the Master (though the impact his actions have on the Web of Time might be deleterious). Like the Doctor, he bucks the Time Lords' non-interventionist stance, but he does so for (apparently) purely selfish ends. Ultimately, this makes him surprisingly human for a Time Lord, with easy-to-understand ambitions. Add onto that his cavalier attitude, the façade of geniality he presents, and the way he functions as mild comic relief (while still seeming like a threat), and you have a relatable, interesting, entertaining Time Lord running about.

Plus, the guy got defeated when the Doctor made it so his TARDIS wasn't bigger on the inside anymore, and that's just awesome.

The Monk could be a great foil for the Doctor and a great way to explore various aspects of the Web of Time that haven't been touched yet--at least in this series. If any Time Lord is going to return, I'd like it to be the Monk.


1. With one caveat: Superman's uniqueness is artificial, while the Doctor really is the only person in the series who can do the things he can do. Being the last Time Lord actually does confer uniqueness on the Doctor; being the last Kryptonian only confers in-name-only uniqueness to Superman.

2. Ignoring the Master, who appears to be returning, and Jenny, who will likely be returning.

3. For instance, Scaroth was necessary for the start of life on Earth, Adric caused the extinction of the dinosaurs, the Racnoss ship catalyzed Earth's formation, the Doctor caused the eruption of Vesuvius, etc.
Posted by Tom Foss at 10:00 AM

Labels: December with the Doctor, Doctor Who, Geekery

I can't remember where I read this, but supposedly Timothy Dalton was seen on set (of "The End of Time") in Time Lord robes, and the rumor was that he might be playing The Monk.

Having just watched the End of Time Part One, I think that's moderately unlikely (and I'm glad I got this post up when I did). There are, however, some Season 5 shots (like these) which give me hope.

Ah. I haven't watched it yet. Waiting for the BBCA airing tomorrow night. But I will say that looking at the photos at that link has led me to the realization that Matt Smith looks more Peter Davison-esque than I had realized.