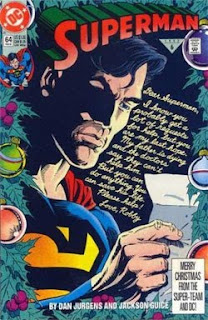 I'd really like to see a return of the Metropolis Mailbag--you know, the old tradition where Superman would take Christmas Eve to answer all the letters sent to him over the course of the year and do his best to fulfill those wishes? I can't remember the last time it happened, though it's entirely possible that it was during the "World Without a Superman" arc, where various heroes filled in for the Man of Steel's annual duties while he was temporarily deceased.

Granted, since Superman's absent this time too, it might feel like a re-hash. But I think it would be a good opportunity to explore some of the current status quo in a more laid-back setting. Mon-El's portion of the story would naturally be about him trying to fit in and understand Earth culture better, Nightwing and Flamebird's story would be about trying to fight against anti-Kryptonian sentiments, and it'd be nice to cap it all off with a big, solemn Christmas dinner at Ma Kent's house, with Conner, Kara, Lana, and Lois, all remembering everyone they've lost in the last year.

I'm enjoying the whole World of New Krypton arc, and I look forward to "War of the Supermen" in spite of the hideous cover and the dodgy concept of making it a Free Comic Book Day book, but it'd be nice if the Superman books would remember that the low-key character-building issues are a major component to making a memorable and high-quality crossover event. It's not much use having a new status quo if you're not going to use it.
Posted by Tom Foss at 11:59 PM