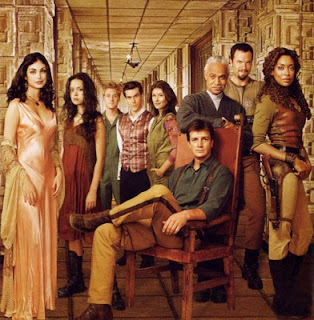 
But damn it, bring back the Middleman!
Posted by Tom Foss at 6:56 PM

I agree completely. I've always said that Serenity not only killed Wash, it killed Zoe. Because without him, she'll probably just be an emotionless robot all of the time. He brought out her warm and good-humored side.

Well, according to Joss Whedon, the discovery of Miranda, now a part of Serenity, was originally intended to be the third season finale cliffhanger. Which means that the death of the show killed of a long possible future, and folded much of that future into Serenity. I, too, hope it doesn't come back, because it couldn't possibly be what it was intended to be. Also, I think what we have in the 13 extant episodes and the one movie is basically crystallized greatness. If it had gone on longer, it likely wouldn't be as consistently good; look at Buffy season 6 (and, to a lesser extent, 4 and 7). The show is awesome, but there are just long stretches of poor quality TV. I'm glad Firefly never had to go through that.

Yeah, Whedon shows that go on too long tend to be subject to "another shocking twist!" and "with sexy results!" style plotting, so I for one am glad we got 13 great episodes (well, 12; I didn't really like the Jubal Early one) and a great movie instead of seeing the show wither into shabbiness like Buffy did. I think it would have been nice to learn a bit more about the characters and their various mysteries, but them's the breaks.