I know that's not an original title, but it's a fitting one. After a GenCon-caused delay, I made it to the comic shop this week and bought most of two weeks' worth of comics. Naturally, though I'm not entirely sure why at this point, that included "Flashpoint" #4. Reading through it, and through some Flashpoint tie-ins of varying quality, really solidified some of the series' problems in my mind.

First, and most trivially, there's the usual-by-this-point problem of editing. 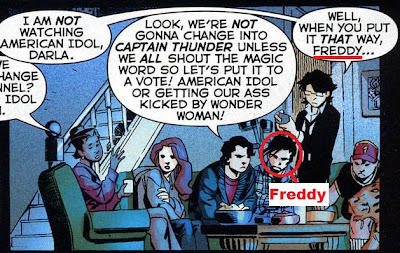 I'm sure the New 52 has everyone working overtime to make things run smoothly, but when you have a panel where a whole bunch of difficult-to-distinguish characters are talking, it might be a good idea to make sure the word bubbles are pointing at the right people. Especially when those word bubbles are being used for relatively important (to the issue) characterization. And especially in the tentpole frigging crossover title you're using to launch your whole new initiative. This is the most high-profile book I've seen this kind of editing error on (unless you count "Superman: Earth One"), but it seems like every week, I pull out a new DC comic with some kind of crazy mistake. The last one I remember was, as I recall, one of the Kid Flash tie-ins, where the art credits were printed twice, on the same page, but in one case clearly accidentally over the art. It's becoming a trend.

I just don't know where to begin. Issue 3 turned out to be utterly unnecessary; the only worthwhile thing it seems to have done was bring Cyborg into the superheroes-changing-the-world fold, but that could easily have been accomplished in issue #1 or 2 as well. The first section of #3 was dedicated to doing what they'd already done in #2, and the Superman plot ended with things in exactly the same position they'd been before. Now, a sizable part of this issue was spent complaining that the heroes didn't get together when they got together in issue #1, and subsequently getting those heroes--or at least some of them--together. I appreciated the moments of characterization for the Shazam Squad, but there's not enough space for them to have any more depth than they did back in #1, and dedicating that space to "war affects people and is bad" seems like a waste.

But hey, we got a full-page splash introducing Element Woman! I guess Geoff Johns slept through the day in creative writing when they explained what a cheat and a bad idea it is to introduce key characters in the fourth act.

"Boy, the Emperor sure is intimidating. You know what? I think I'll go back to Toshi Station after all."

"Gee, I never expected Mount Doom to be so awfully hot, and this ring's not so bad. Come on, Sam, let's head back to the Shire."

"Holy Hannah, it sure is hard to destroy these horcruxes. That's what, like, four of them? Screw this, I'm going back to my cupboard."

Barry Allen, the Fastest Man Alive, has spent the last three issues spinning his wheels, and decides in this one to just head off in a completely different, irrelevant, unnecessary direction. This is the hero who inspired a legacy? This is the steadfast beacon of hope who outshone even the Man of Steel? This is a man who raced back from death itself to save the world that he sacrificed his life to save once before?

The worst part is his rationalization: "Trying to figure out what events he altered will be like trying to find the right grain of sand in the ocean." Well, sure, I guess, except that if you go back in time to stop him, you should actually see him altering those events. You know, catch him in the act. Altering them. And I suppose it would be hard to find the right grain of sand in the ocean. If only you had the ability to travel through time, thus allowing for a near-infinite amount of it, and some kind of super-speed ability that would make examining a large number of things possible in a short amount of time. Of course, it would help if the person with those abilities also had expertise in a branch of science that went to places and pieced together what had occurred after the fact, some kind of forensic science. But where on Earth would we find a character with super-speed, time-travel abilities, and forensic science expertise?

Look, if the point of the whole series up 'til now is Barry learning that, in this new world, he can't just do things the way he used to do them--round up the heroes, get to work, etc.--then it's been awfully obtuse. Especially since "rounding up the heroes and getting to work" has worked about 50% of the time. But honestly, I can't see another point. Meanwhile, I keep feeling like we're missing out on a much more interesting story, replaced with these repeats and retreads of what we've already seen, and plot elements that either go or come out of nowhere.

So I suspect that August 31st will give us Barry and Zoom's inevitable confrontation, the return of Superman, and Barry finally setting things right...but not quite everything and not quite right, because of his swiss-cheesed memory. And then it'll all be even mooter than it is right now, because we'll have the New 52 to contend with.

But if "Flashpoint" is meant to be our gateway into the New 52, then it seems like we've got a lot of repetition, disjointed storytelling, bad editing, and repetition to look forward to.
Posted by Tom Foss at 6:50 PM

Sounds like Flashpoint is pretty terrible. I'm so glad I stopped caring.