Rather than start with the beginning, I think it's better to start with the impression I had after finishing. It reminded me of nothing so much as the DCAU Superman Animated Series. That series had a similarly casual Superman (at least in terms of language and attitude and often righteous anger), with a similarly nonchalant, collected Lex Luthor, and similar ties back to the Fleischer shorts. Both are clearly attempts to distill the essence of Superman into a concentrated, purified form.

So the story begins with Superman invading a penthouse, where he's attacked by armed thugs as he pursues a corrupt businessman named Glenmorgan--"Mr. Metropolis," the cops call him. Glenmorgan gives us such a great glimpse into the thesis behind this series, shouting "Somebody! Save me!" as he's being held by the Man of Steel. I don't know if the phrasing is intentionally meant to recall Remy Zero's "Smallville" theme song, but the irony is great--that someone would need to be saved from Superman. Glenmorgan's next line is no less important: "In the name of God! You people [the police] are supposed to protect me!"

And, of course, that's exactly the problem. The police protect high-class white collar villains like Glenmorgan, but there's no one to protect the people he exploits--or at least there wasn't anyone, until Superman showed up. Now, the Man of Steel exists to protect the people--by attacking the real villains, the ones who hide in penthouses instead of secret lairs.

Ever since the preview pages leaked, I've seen people complaining that by jumping off the roof with Glenmorgan in order to scare him into talking, Superman is 'taking a page from Batman's book.' I'd recommend that those people head on back to "Action Comics" #1 (or more likely, a reasonably-priced reprint) and find the very scene that Morrison and Morales are paying homage to here. Then, it was a corrupt lobbyist, but the purpose and effect are the same.

We get, in this initial scene, a good look at the young Superman's philosophy as well: "Nobody's so big they can't be taken down a peg or two" not only prefigures his treatment of Green Lantern in "Justice League" #1, but also underscores his proactive fight against moral crime, no matter the perpetrators. This is a Superman who uses his power to help the powerless against those who would use power for evil, and that's an aspect of Superman that's not only foundational, but too often forgotten or overlooked.

But the statement also betrays Superman's hubris, foreshadowing his own fall at the end of the issue. 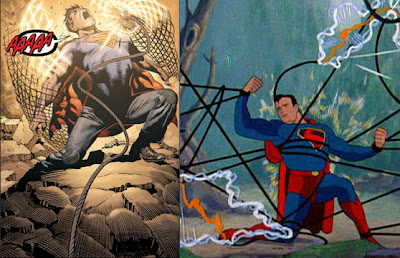 The tenement battle--and specifically Superman's struggle against the electrified net--was what really reminded me of the Fleischer shorts, and it's another nice nod by Morrison and Morales to the particular era they're trying to evoke. The moment when the people stand up to protect him seems to be the validation of his whole mission--and a reference to the guiding philosophy that anyone can be a Superman, and that Superman's greatest power is his ability to inspire. 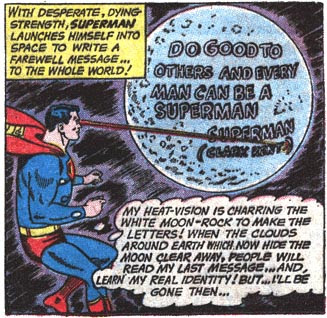 For all that the word "cynical" has been bandied about with this version of Superman, it's actually amazingly optimistic. It's not cynicism to note that power corrupts, it's cynicism to accept that, to refrain from doing anything about it, to admit defeat. And as I've said before, the whole idea of Superman is that there's one person that power didn't corrupt, that power never will corrupt, who uses that power to better others and help the weak. That's what Superman is, and that's how anyone can be a Superman.

We see a nice change too in the reason for Clark Kent's chosen career; in the '30s, he became a reporter to stay near the news, so he'd always be the first one to arrive at trouble. Sadly, that's worn quite thin as a justification in the intervening decades, but positioning Clark Kent as a way for Superman to expose more injustice, to inspire more people, and to generally continue the same work he does as Superman is brilliant. Morrison's not the first to do it, of course, but here we see it as a reason rather than a justification. That Clark lives a meager existence, foregoing luxuries even as simple as television, only adds to the selfless do-gooder image.

Clark, Jimmy, and Lois have an interesting relationship here; it's established fairly early that the Daily Planet is still known for the Superman stories (and that Lois gave him the name, a nice carry-over from the Byrne era), but Clark works for George Taylor at the Daily Star, just as he did in the Golden Age. This doesn't just set up a nice rivalry (with Jimmy as the neutral party), but it also sets up a distinction between the sensational, possibly more hard-news Daily Planet, and the more opinionated, crusading Daily Star.

Luthor's motives at this point are unclear, but I like that this Luthor skews somewhere between the Animated/Byrne-era genius businessman, and the Maggin-style criminal mastermind. That he can pin Superman's defeat down to the second sets him up as an excellent foil, and I can't wait to see where this all goes.

Speaking of Maggin, the "invasive species" angle on Superman's presence is a great one, and something of an update to the "Must there be a Superman" argument.

After all this, there's plenty of detail left to praise. I'm curious what more there is going on with Glenmorgan and his Dr. Psycho-esque partner. I hope the purple-clad, white-haired landlady with no traditional vowels in her name pans out the way one might expect. I liked the reference to Clark's friends--"two men and a woman--a blonde, very nice, very good-looking"--which pretty firmly establishes that for all his down-to-Earth, powers-developing, man-of-the-people nature, this is still a guy who spent his teenage years with superheroes from the future. I like Jimmy Olsen's ringtone. I like the callback to Superman's encounter with a wife-beater, which was a great detail in "Action Comics" (vol. 1) #1, and was expanded into one of my favorite stories of the post-Crisis era. I like that we get to see Superman being faster than a speeding bullet and able to leap tall buildings in a single bound, but not quite more powerful than a locomotive.

I've been clamoring for a Superman book set in the '30s with the old rough-and-tumble protector-of-the-oppressed Superman for years. This isn't exactly that--it's not a period piece, and it's not drawn by Jon Bogdanove--but it definitely scratches that itch. I don't know if this is "Superman for people who don't like Superman," but it's definitely Superman.

And I can't wait for the next issue.
By the way, I (and a bunch of more talented people) will be writing reviews this week and for the rest of the month, covering DC's New 52 #1s for Nerdy Nothings. Be sure to check them out!
Posted by Tom Foss at 8:59 PM