The Problem of Doomsday 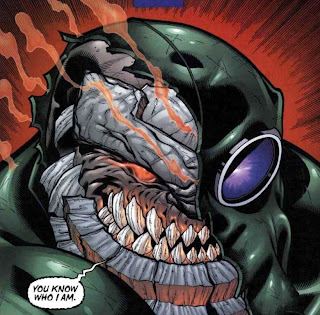 Apparently there's talk about DC redoing the Death of Superman story for the New 52, which shouldn't be entirely surprising. They've spent the last year redoing Batman: Year One, so naturally they'd look toward their most successful single story as another greatest hit to replay (Heaven forbid they try to make new stories; the New 52 is about repeating things that worked in the past). It's just a shame, because Doomsday is so completely played out. Doomsday has been played out since the last page of "Superman" (vol. 2) #75, which frankly should have been the last time we ever saw him.

I love the Death and Return of Superman storyline. It's bloated, it's tied into a huge mess of early-'90s subplots that make the story difficult to recommend to new readers, but it's better than a lot of people give it credit for, and it's a pointed commentary on the '90s trends toward younger, edgier, more violent versions of heroes. Given how DC has embraced those trends wholeheartedly with the New 52, it's again unsurprising that they'd want a version that was free of such uncomfortable subtext.

But I don't love Doomsday. Doomsday was never a character; he (it?) was a tool. Doomsday was designed to be a mindless force of nature, an unstoppable creature of death and destruction made incarnate, something that could believably kill Superman, without making Superman's sacrifice entirely anticlimactic. Doomsday was also a creature who could die in the battle without triggering all our uneasiness over Superman killing, since Doomsday was barely even alive in a conventional sense. There are probably other ways to read that battle besides Superman fighting against popular sentiment, against the idea that he's outdated and no longer has a place in the world, but I think that's the reading that makes the most sense given the rest of the story.

Just like that notion, Doomsday just won't go away, no matter how many different ways he's disposed of. I've talked before about my distaste for General Zod, and the problem with Doomsday is perhaps even worse. Zod, at least, has a personality. Zod can be reasoned with; Zod can form plans and have nuances to his character. Doomsday is pure, unrestrained, unthinking brutality, which makes him kind of a one-note character, inasmuch as he even is a character. And while Zod can presumably be killed for good, Doomsday's actual power is that he can't. Ever since his second appearance, his ability has been that whatever kills him only makes him stronger, so you can't even have the out of breaking his neck.

Doomsday's appeal, in addition to his presence in the top-selling comic story of the last twenty-five years, mostly has to do with his unique (if frequently ridiculous--bike shorts?) appearance, and the fact that he presents a physical challenge to Superman. There was a time when recurring physical villains were a fairly small part of Superman's rogues gallery, mostly consisting of Metallo, some Apokoliptians, a rotating cast of Phantom Zoners, and arguably Parasite and Bizarro. Over the course of the last thirty years, that roster has grown somewhat. Lex Luthor got a bodysuit, Brainiac got various upgraded bodies, Atomic Skull was altered into a more physically threatening form, villains like Conduit and the Eradicator and Mongul were introduced, but the number of villains who routinely go toe to toe with Superman is still rather small. The problem is that these are the villains who are largely perceived to be Superman's A-list, I think. It's understandable that artists want to draw (and audiences want to read) Superman hitting things--I'm certainly among them--but there's a way to do that without having him constantly in fisticuffs with his enemies. Superman's been fighting robot henchmen for most of the last 75 years, and I honestly think that's more satisfying than seeing him avoid hitting a battlesuit-clad Lex Luthor in the unarmored head.

So Doomsday keeps popping up, because people keep looking through Superman's rogues gallery for villains he can get into a decent fistfight with, and running out of options. There have been some valiant attempts to make him interesting, and I'll readily admit to reading and rereading every panel of "Superman/Doomsday: Hunter/Prey" more times than I can remember. But even that story recognized that Doomsday alone is an uninteresting villain; he only worked in concert with the Cyborg Superman and (to a lesser degree) Darkseid. His next outing was as a pawn (and host body) for Brainiac, which was the last story creator Dan Jurgens told about the monster. Then we got the inevitable (and ridiculous) Superman/Doomsday team-up against Imperiex, then "Superman" #175 which gave the creature intellect (and wrapped a bow around the villain's entire existence), then we got the Reign of Doomsday nonsense with variations on the creature and I've kind of tuned that out.

A lot of this would be avoided if writers would stop feeling so beholden to the idea that every Superman story needs him socking the villain across the jaw or punching someone through buildings. Relying on Superman's strength rather than his intellect gives us diminishing returns both in terms of repetitive storytelling and serious limitations on threats and enemies. He's never going to be able to have a satisfying fight with the Prankster or Toyman or Mr. Mxyzptlk. There's a reason most of Superman's villains are more intellectually challenging, because it requires more clever storytelling than "who can punch harder?"

Failing that, they could at least dig a little deeper for a Vartox or a Titano or a Rampage, rather than giving us another unnecessary spoonful of Doom. Or, you know, they could invent new characters and try to tell new stories, but I suspect blame for that falls more on the shoulders of the editorial staff.

All that needed to be said about Doomsday was there in "The Death of Superman." All that reasonably should have been said was done by the time Jeph Loeb finished up his issue with the character. And yet he continues to stick around, because he has evolved beyond the ability to die. It's just a shame that he can't seem to evolve into something interesting.
Posted by Tom Foss at 9:30 PM