Today we're tackling the most recent version of Superman's origin, as told in Superman Year One. 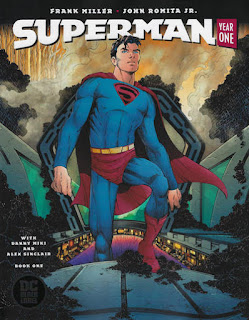 Key Elements: As the planet Krypton explodes, a scientist and his wife place their young son in a rocket and launch him into space. He lands on Earth and is found by Jonathan Kent, who brings him home to his wife Martha, and they adopt him. From the start, he has a dense body and superhuman abilities, and these grow as he gets older. He begins using his powers to punish bullies, but learns quickly that his actions sometimes have unintended consequences. When he saves Lana Lang from an attack, he reveals his powers to her and takes her for a flight. He uses his abilities to excel in sports, to Pa's dismay. He decides he needs to leave and see the world. Ma uses the super-durable blankets from his ship to make him a garment.

Interesting Deviations: Baby Kal is old enough to be standing and walking when he arrives on Earth. Jonathan Kent is alone when he finds Kal. It's heavily implied that Kal has some kind of psychic ability, and that he uses it to influence Jonathan to take him home. The Smallville High team is the Wolves here, which is an interesting choice. I don't think that one's been done before. They were the Crows on the "Smallville" TV series and the Spartans in "Man of Steel" as a nod to the director.

Additional Commentary: I know it's probably cliché to criticize Miller's overwrought narration, but it's laid on pretty thick here, switching from baby Kal's perspective to third-person narration of various degrees of omniscience on a page-by-page basis.

Ma and Pa Kent talk like a very stereotypical, old-timey kind of farmer. 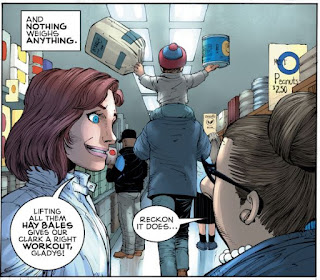 It's pretty clear that Frank Miller doesn't know what age high school freshmen are, since both the class and the kids are written as though they're in elementary school (when they're not being written as bizarrely anachronistic old men). 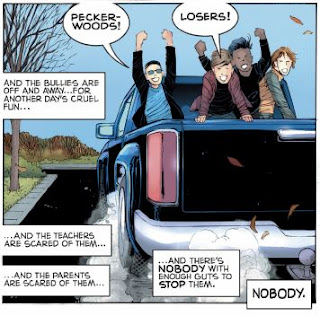 Later we see that Clark and Lana are conversant in Plato and Aristotle and Freud and Jung, none of whom are commonly read in high school courses. We know that Clark uses his abilities to speed-read, but it's Lana who brings up the topic. Also, I would have killed for a forty-five minute lunch period.

It's nice to see Clark being friends with a bunch of outcasts and misfits, though it would be nicer if Lana were part of the friend circle, since she's introduced as being somehow connected with Clark, but we don't actually see them interacting until considerably later, as a prelude to...well, to the unpleasantness that really didn't need to happen.

I appreciate having thought balloons here, but it's a really strange lettering choice not to make them into the typical scalloped thought balloon shape. And this is John Workman on letters! And all the sound effects in this comic look like this, which is...a choice, for sure. 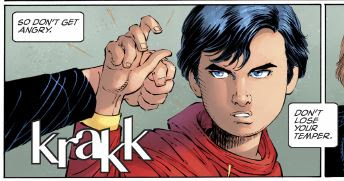 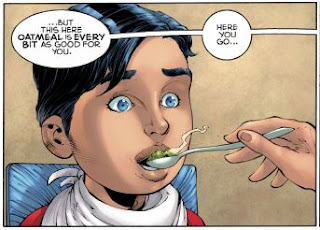 It's also a strange choice for Clark Kent to be reading Doc Savage. I suppose there hasn't been a clear indication of when this story is taking place, but there's no time I'm aware of when both goths and 1930s pulp fiction were commonplace. It's one of many places where this book feels adrift in time, not contemporary enough to feel like a modern retelling, not classic enough to feel like a period piece.

I could have done without Clark Kent peeing, but I guess this is a Black Label book, so.

The bit of this that got the most pre-release controversy is the idea that Clark would join the military (here, the Navy). Jonathan is surprised that he's decided not to go to college, but Martha expresses quite reasonably a fear of his prodigious power being turned toward war. That's still contrasted with Clark's glee at seeing an F-35 flying overhead—complete with a "Look! Up in the sky!" caption—when he arrives on base. 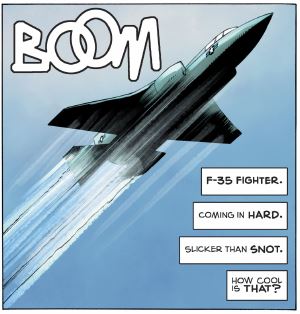 The F-35 is an interesting choice to compare so directly with Superman, one originally intended to be the super-powerful champion of the oppressed, the other a bloated, ineffectual example of government waste and the military industrial complex run amok. As with the Superman in the military angle, it'll be interesting to see how much of this is intentional commentary and how much...isn't.

As a bit of a final thought here, people were (justifiably) skeptical of this book before it was released. Frank Miller hasn't exactly had a great track record for the last (checks watch) eighteen years or so, and "the origin of Superman" is such well-worn territory that some chuckleheads have dedicated whole blog series to examining it. Heck, we just had a problematic dude writing a new, modernized exploration of Superman's origins four years ago. When the previews showed Clark joining the military, it's no surprise that there was some backlash. Awareness of the problems with the military—in how it's used, how its members are treated, and how it uses pop culture and superhero media as a recruitment tool—is at a high point in the last couple of decades, and people were uncertain how the guy who wrote Holy Terror was going to handle that relatively sensitive topic.

And one issue in, we still don't really have an idea. There's a definite "recruitment commercial" feel to the last few pages of the book, but Martha's vocalization of a lot of fans' fears gives me some hope that it won't all be rah-rah jingoism. As to the rest of the book? I'm interested to see where it goes as a fan of the character, but there's just...not a lot here. From the writing to the art to the letters and coloring, everything about this book feels phoned in. Miller and Romita in particular feel like they're parodies of themselves, and if you'd told me that this was lettered by someone brand new to the industry and not the legend who put words to Simonson's Thor run, I'd believe you. For the "definitive origin of Superman," this just kind of...exists. What's interesting isn't new, and what's new isn't interesting.

The Rocket: We don't get a really clear glimpse of it, but what we see is nonsense.

Not only does it look like a knockoff of some landspeeder from The Phantom Menace, but it looks an awful lot like it should be large enough to hold more than a baby. It's implied that there's some kind of on-board AI teaching Clark along the way, as in "Superman: The Motion Picture," but the overwrought narration and constant perspective-shifts obscure whether that's intended to be the case. Not a fan. One exploding Krypton for this rocket.