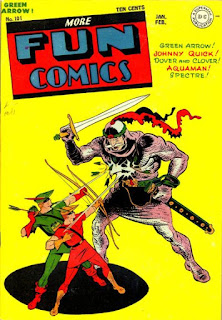 In the modern age, it's easy to think about how common superhero origin retellings are. We see new spins on old origin stories all the time, usually from different creative teams or in different media. It's strange to think about a time when a popular character's origin might not have been well-known. It's stranger still to think about the original creative team taking multiple cracks at a character's origin. To my knowledge, Lee and Ditko only ever did the one origin story for Spider-Man, for instance. But Siegel and Shuster told Superman's origin at least four times across the comics and newspaper strips. This is, as far as I can tell from a cursory search, also the last time they'd tackle the story together. So, without further ado, here's 1945's More Fun Comics #101, the first appearance of Superboy!

Key Elements: The distant planet Krypton is home to an advanced species of superintelligent humanoids. Krypton's gravitational pull is much stronger than Earth's, such that a Kryptonian transported to Earth would have superhuman abilities. Scientist Jor-El believes that the planet is doomed, but cannot convince the science council to join his plan to build rockets and evacuate the population. The tremors increase in severity, and Jor-El arrives home to tell his wife, Lara, to get in the rocket with their child, but she refuses to leave his side. They launch their son into space just moments before the planet explodes.

The rocket lands on Earth, where it is discovered by a passing motorist, who takes the baby inside to an orphanage. The child astounds the staff with amazing feats of strength, and is eventually adopted by an older couple, the Kents. As Clark Kent grows, so do his amazing abilities, which set him apart from other children. Clark keeps his powers secret to blend in with other children, but when he sees someone in danger, risks revealing his abilities to save an innocent life. To keep people from knowing that Clark Kent has superpowers, he adopts a costumed superhero identity—Superboy!

Interesting Deviations: Well, the first interesting deviation is that this is, technically, the first appearance of this version of Superman. If you remember from Rocket Trips #3, our look at the Secret Origins story about Earth-2/Golden Age Superman, he was never Superboy. So technically this story is the first appearance of the Silver Age Superman. Not that it was intended to be, that's a weird bit of retroactive metacontinuity. This might also be the only entry in this series that neither displays nor names Superman/Superboy on the cover.

This may be the only time the people of Krypton are described as generally possessing "great physical beauty."

We've moved away by this point from the notion that Kryptonians just had superpowers on Krypton, something I suspect is due to the gradual increase in Superman's own abilities (if Kryptonians can fly and survive in space, why didn't they just fly off of the planet?), but here the strong gravity is also credited with their ability to build lightweight, fast-moving aircraft (and eventually, spaceships). I'm not 100% convinced of the physics of that one.

Lending credence to the metaretcon is that we have "Jor-El" and "Lara" as Superman's parents' names. Lowther's novel used those spellings (capitalization aside), but I think this may be the first time they appear in the comics. The novel also described the Council members as wearing red-and-blue togas, and, well, this is how everyone on Krypton dresses:

All the men, anyway. Lara looks like a candy striper. 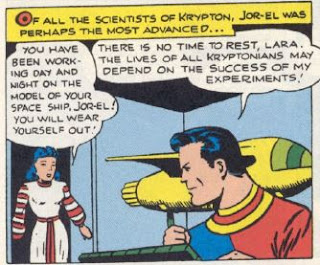 Here, as in our previous entry, Jor-El specifically suggests that the Kryptonians relocate to Earth. The rocket here is also explicitly large enough for both Lara and Kal-El, and as far as I can tell, this is where that element is introduced. It's worth noting that Kal-El is never given that name here in this story.

The rocket lands gently on Earth, though no additional mention is made of it after the passing motorist finds it. Again, I think this is a new element; prior to this, it was typically depicted as a crash landing and the ship caught fire and disintegrated soon after.

It's worth noting that even this early in the mythos—even under Siegel and Shuster!—the "passing motorist" weaves in and out of the narrative. He's there from the start, in Action #1 and the newspaper strip, but is cut out of the origin in Superman (vol. 1) #1, returns in the Fleischer serial, cut out again in the Lowther novel, and returns again here. I'd love to know the reason for this back-and-forth; I think there's better narrative economy and drama in the Kents finding the ship, and it's strange that this character never returns to the story later on. Like, I've read multiple comics about The Burglar who killed Uncle Ben, there's a whole mythos about the guy who murdered the Waynes, but as far as I know this guy just drops out of continuity forever after this comic.

For perhaps the only time in Superman history, Pa Kent is bald and has a moustache. He looks a little like Teddy Roosevelt. Unlike Clark's Kryptonian parents, who receive their modern names for the first time in this comic, the Kents aren't named individually at all. 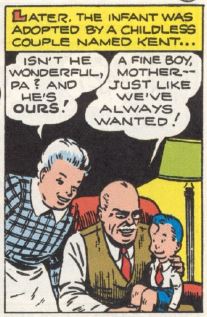 Clark seems to decide on his own that he needs to keep his powers secret and blend in, rather than having that strategy suggested to him by his parents. 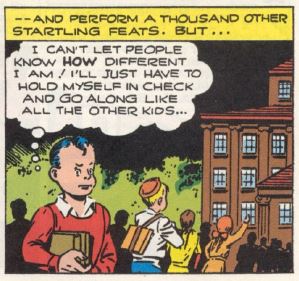 Also, while his ensemble of a red sweater over a white collared shirt and blue pants would be the canonical Young Clark Kent look into the '80s, he notably doesn't wear glasses. Flipping through subsequent issues, it looks like he first puts on specs in More Fun Comics #107, just in time to make the jump over to Adventure Comics with the other superhero features.

Clark sees a man pinned under a car, and lifts it off of him. To the children who witnessed the act of heroism, Clark nervously suggests that "something happened just for a minute to give me super-strength," which is about as flimsy as explanations get. This spurs him to develop the Superboy identity, and notably, a caption tells us that he fashions the costume himself. It seems the idea that Ma Kent wove it out of indestructible Kryptonian blankets would come later. 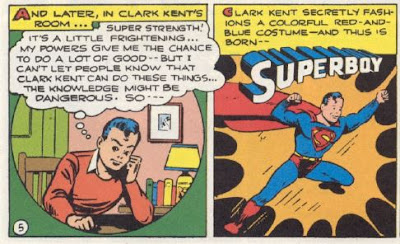 The last major deviation here is just how young Superboy is. Typically, Superboy's adventures are "Superman when he was a teen," but Clark seems to be more like 10-12 here. Certainly not high school hijinks like we'd see later on.

Additional Commentary: In a world where Superman's origin gets told so often that I can build a whole blog series about it, it's hard to imagine anyone, let alone "thousands of followers," asking about it. 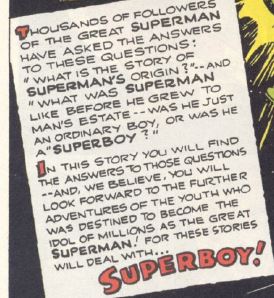 Flowery language describing Krypton shows up a few times in these early origins, and though the prose is positively ultraviolet, I really enjoy it. 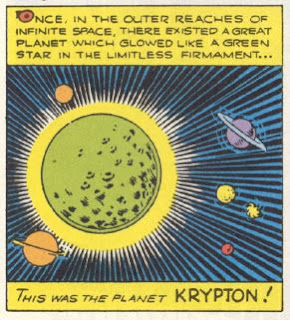 I've covered most of the other interesting stuff in the Deviations section, but this is an interesting artifact. While its relationship to the Silver Age is mostly due to retcon, you can see some of the seeds here. "Kid superhero who isn't a sidekick and has solo adventures" would become a major feature in the Silver Age, kicking off with the Legion of Super-Heroes and finding their apotheosis in Spider-Man. While Clark here is closer to what you'd see in a Boy Commandos or Newsboy Legion comic in terms of age and artistic influence, this really is one of the impulses that ushers in the next age of comics.

The Rocket: Hoo boy, look at this monstrosity. Dig the fins, but why a yellow-and-green color scheme? It looks like a fish. One exploding Krypton. 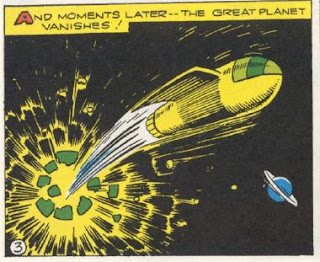