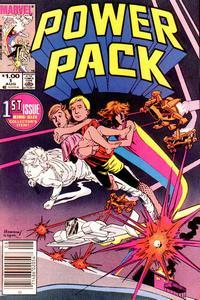 Like many others, I first encountered the Power family as a kid, in that infamous free "Spider-Man and Power Pack" PSA comic about molestation. I'm not sure where it went from there...I was more than a little convinced at the time that they'd created the Pack solely for that comic. But, some time later, I came across a few scattered back issues, which spawned a background obsession that has plagued me for years. 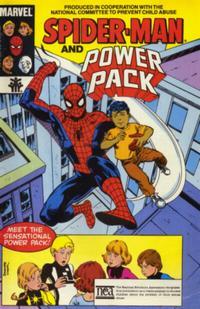 See, I've had an affinity for young superheroes ever since I can remember. My favorite book series in my younger years was (and almost certainly still is) Animorphs, which will undoubtedly get mentioned again on this blog in the future. My tastes have changed a lot over the years, but I think I'll always be a sucker for the young, brash, naïve, idealistic heroes, and the noble, determined, pure, leader heroes. Naturally, Power Pack falls into the first category.

So, for the last several years, whenever I've had some extra money to blow and I've been in a comic shop with a decent selection, I've picked through the Power Pack issues and added a couple to my collection. It's not complete, but it's getting fairly close, especially since I don't really actively seek out issues. 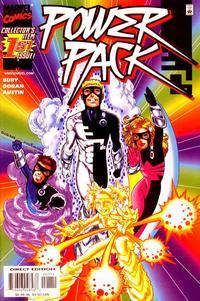 Naturally, then, I've jumped on both of the more recent Power Pack revivals. The one from a few years back, a 4-issue miniseries with Colleen Doran, was fairly decent and tried admirably to bring the Pack into the modern era by aging the kids a little, updating their costumes, and making several references to their rather long history.

I liked that Julie Power is in Excelcior (in the pages of Runaways), though I think that she's playing up the "celebrity" part of being a superhero quite a bit. The Powers got to hang out with a lot of the big guns, but were never really well-known in the Marvel U. 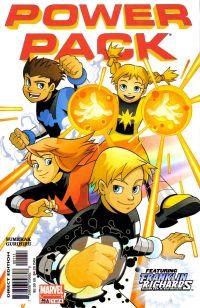 The newest revival, Marc Sumerak's version, has been a mixed bag. On one hand, I really enjoy the way Sumerak can tell fun, interesting stories with simple plotlines, and that each issue is entirely self-contained. It's got good characterization with the kids, and the sibling rivalries are believable. On the other hand, Sumerak employs what is easily the sketchiest continuity I've seen since "Superman: Birthright" ended. I'm not asking that "Power Pack," which is clearly intended to be a fun book, accessible to a younger set that doesn't know the Marvel Universe inside and out, be steeped in decades of continuity the way "Runaways" and "She-Hulk" are, but I would like a little indication that this book is either completely separate from the regular continuity, or takes place sometime in the past, when Power Pack were kids, had their original (and, incidentally, final) power sets, and weren't jaded teenagers and former New Warriors. 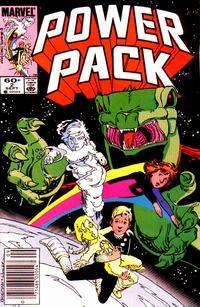 F'r instance, Wolverine made an appearance in this week's "X-Men and Power Pack," wearing the costume that he first started wearing in "Astonishing X-Men." Now, he's worn the same damn costume for ever, except for that ugly brown thing that he wore while Jim Lee was around. If he had worn that costume in this issue, then one could easily slip it anywhere into Marvel's long history with relative ease. But, sticking in a modern X-Man ties the story to modern continuity, which really makes anyone who would like to know where this new Pack fits in, a little confused. It'd be difficult to have a 12-year-old Julie Power running around in a universe that also contains her late-teen/young adult self.

If I wanted to be nitpicky, I'd talk about the needless character addition (throughout the original series, Alex had a crush on a girl named Allison. The only difference I can really tell between her and Caitlin, the object of Alex's desire under Sumerak, is that Allison's hair was brown, and her name was spelled in a variety of ways), or I'd mention that I don't think Katie has disintegrated anything at all in the entire run (she operates like a battery: she disintegrates objects, absorbing their energy, which she can then release as blasts of power), but has frequently used her abilities. But I won't be nitpicky. 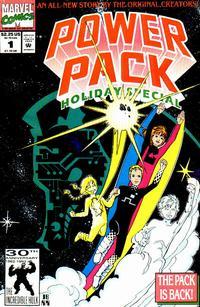 Besides that, while these comics are fun, the original Power Pack wasn't just a superpowered Nickelodeon sitcom. I first read about them discussing sexual abuse, but within the regular book they tackled some heavy issues. Gun violence in schools, anti-Mutant bigotry, pollution, child abuse, and Galactus come to mind immediately. "Power Pack" always walked a steady line between fun superhero romps, cotton candy kiddie fare, and realistic sociopolitical commentary. So far, Sumerak has stayed firmly in the "cotton candy kiddie fare/superhero romp" segment.

Now, I don't mean to say that it's not fun; the stories have been a lighthearted blast. But I do miss the depth that was omnipresent in the original series. Cotton candy tastes good, but it doesn't have much substance. The "four-issue miniseries" format that has prevailed for the latest incarnations, coupled with whatever mandate or desire dictated single-issue stories (a fine move, as we need more of those), has cut into the ability to form intricate plots or overarching themes a little, but JLU managed to turn two seasons of single episodes into a single story, there's no reason that "Power Pack" can't have a common thematic element to tie the books together. 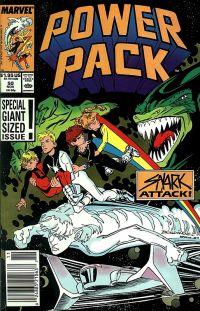 I hope Sumerak gets an ongoing series, mainly because "Power Pack" in any form is nice to have. But, I do hope that they'll take a more serious approach to the storytelling if that happens, or at least an approach that shows a better connection with the Marvel Universe as a whole.

"Power Pack" is a fantastic concept with limitless potential. The Power kids fit as naturally in sci-fi space opera as they do in traditional superhero antics or fantasy worlds or the dangerous streets of Marvel's New York City. There's no reason that this new Pack can't tell stories like that and still be accessible to anyone who picks it up.

No-Prize Time: Okay, having gone back and done a little research at The Unofficial Power Pack Site, which hasn't been updated since I last looked at it several years ago, I feel safe in trying to come up with a Pack timeline, fitting this new series in as best as I can (which isn't very well). Um...unless you're a Pack fan, you're not probably going to get much out of this, so you might as well go check out some of the more entertaining parts of the blog, or leave some comments.
1. Alex (12), Julie (10), Jack (8), and Katie (5) get their powers from an alien.
2. The original "Power Pack" series takes place here. A bunch of stuff goes down, powers get switched around, Alex is eventually turned into a horse, etc., but it's all back to normal by the last issue of the series, a Holiday Special.
3. This new series takes place. The evidence for this is that the Powers all have their original powers (they switched twice over the course of the series), which was the status quo at the original series's end. It can't be before the first power switch, because Katie is entering the third grade in the first of Sumerak's issues, which makes her probably 8 years old (leaving Alex 15, Julie 13, and Jack 11, roughly), placing them older than when the first change occurred. After that, they didn't get back to their original power scheme until the series was over, so this has to be after that. Also, this clears up any problems with Allison, since she was with a different guy at the end.
4. Alex joins the New Warriors as Powerhouse.
5. The Colleen Doran miniseries takes place here. The Powers are older in this one, and have their regular powers back. They've also moved to a new area, meaning plenty of new drama.
6. Julie joins Excelsior, having grown up a bit more and left her "jaded" childhood behind. This brings us to the present day. 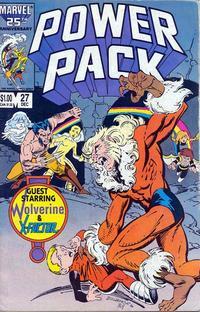 The difficulties with this are, as mentioned before, Sumerak's sketchy continuity when it comes to the X-Men's appearances, and the fact that the Power parents knew, by the end of the original series, that their kids were superheroes. The kids have taken such strides to hide their secret lives from their parents in the new series that it seems like they aren't supposed to know.

It's possible, given the Doran miniseries' portrayal of Katie as gifted for her age, that she's younger than the usual 3rd Grader, which could possibly place this series back before #25 of the original, where the first power switch occurred. But, I don't have my older "Power Pack" comics here with me at school, so I can't say if that contradicts anything. Even so, that's allowing for a huge amount of time between issues 1 and 25, and it only compounds the already blatant problems with the X-Men.

If Sumerak's series continues, I would like to see the Fantastic Four show up. Papa Power was good friends with Reed Richards, and Franklin was a semi-official member of the group.

What's that? You're actually still reading this? You must be a bigger geek than I gave you credit for.

That's an excellent article in which you're discussing PP.

And excellent points you're made in regards to the original series' continuity. And as for both the Newest Minis {including the X-MEN/POWER PACK}; Mr. Sumerak made it clear that those Mini were intended to be a part of the MARVEL AGE/ADVENTURES {even though I do understand your confusion with the other MU Heroes in their "current" costumes within the Minis (as was the case with the F4 appearance in PP [Vol II..??] #3's Issue).

Also, thank you for mentioning both the 2000 PP Mini {in which I still believe that they did a fine job on showing the Pack's most recent status within the MU, as well as for Julie's/Lightspeed's recent appearance within RUNAWAYS [#1-#6 AKA TRUE BELIEVERS Storyarc, in which should be/already is out as the Fourth Digest]

And speaking of Runaways {and if you're a regular subscriber of WIZARD}; I hope you had a chance to get WIZARD #169, in which their BOOK OF THE MONTH's Focus is on said series, with a sidebar on Julie & her teammates in EXCELSIOR {as well as on the other of BKV'S Favorites... ;o)}......

And good points you've made in regards to your suggestions about Mr. Sumerak & having the PP as an Ongoing {again}.....

As for the PP's Minis Artwork {by Gurihiru }; at least is 10x {no make that 100x} better than the current Artwork for the NEW WARRRIORS Mini...!! :oP

Anyway, thanks for letting the readers know about your opinions for both the Original PP & Sumerak's PP.....

Cool article! I'm a big fan of Power Pack, both old and new!

I'm pretty sure (from interviews, etc) that the new Power Pack (and X-Men/Power Pack) limited series is meant to be out of continuity, which might ease some of your continuity concerns that you expressed in your write up (Guest stars in current costumes, etc).

But even though some of the events in this new series may not directly reflect or refer to the original Power Pack series, I think the writer of the new series does a real good job of staying true to the characters and the overall vibe of the Power Pack we all remember and love.

To be honest, I'm kinda glad they did it this way. It's still true to the characters I care about, but it starts fresh for the new generation of readers it's aimed at. (After all, what 8-year-old wants to search for obscure back issues from 12 years before they were born?)

I love the original continuity, but I'll take my Pack however I can get it... and this version is the best in a long time! I hope it sticks around!

Excellent summarization of the "life" of the Pack. My favorite comic series of all-time.