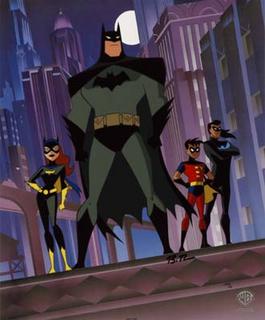 My ideal Batman is a normal man at the peak of human physical ability. He has boundless wealth and access to a near-unlimited supply of crazy gadgets and nonlethal weapons. Yet his greatest power is his intellect.
My ideal Batman is not a god, but he can hold his own with the other six most powerful beings on the planet.
My ideal Batman is gruff and dark, and that doesn't necessarily change when he takes his mask off.
My ideal Batman has created a surrogate family to replace the family he lost as a child.
My ideal Batman trusts no one more than Alfred, and trusts Alfred more than himself.
When you read my ideal Batman's dialogue, you can hear Kevin Conroy's voice saying the lines in your head.
My ideal Batman is constantly underestimated by his enemies, except the Joker and Ra's Al Ghul.
My ideal Batman may seem intimidating, cold, and aloof, but his family (Dick, Tim, Barbara, Alfred, even Clark and Diana) knows that he is caring to a fault.
My ideal Batman considers Superman to be his most trusted superhero ally, as well as his best friend in both guises. They have different methods, but serve the same ends.
My ideal Batman is the sort of person who would purchase a posh apartment for his best friend's wedding gift.
My ideal Batman is always prepared, which makes him seem paranoid, but he's usually right, and you could trust him with your life.
My ideal Batman makes mistakes, but is usually able to learn from them quickly and turn the situation to his advantage.
My ideal Batman will probably never admit how much he loves both Wonder Woman and Catwoman.
My ideal Batman is as at home fighting metahumans like Killer Croc and Clayface as he is fighting common crooks and thugs, or white-collar criminals and mob bosses.
My ideal Batman took on Dick Grayson as a ward because he knew how the boy felt and saw how similar the situation was to his own, because he was lonely, and because he genuinely cared about the child, not because he wanted to form an army.
My ideal Batman is one part spacefaring swashbuckling superhero, one part brilliant scientist, one part tactician, and two parts detective.
My ideal Batman owes as much to Sherlock Holmes and the Count of Monte Cristo as he does to Zorro and the Shadow.
My ideal Batman splits his life between two masks: one, the carefree playboy Bruce Wayne, the other, the brooding nocturnal angel of vengeance, Batman. The real man is somewhere between those extremes, a lonely person with a near-obsessive drive for justice born out of a desire for closure. He has trouble allowing people to get close to him, for he has an overactive sense of guilt and responsibility. When people around him get hurt, he blames himself for not doing enough to save or help them. He has trouble forming lasting romantic relationships because he lets his quest for justice get in the way. Few women have been able to see the man between the masks, and Batman's relationships with them all teeter on the brink of romance, surrounded by a churning sea of sexual tension. He is afraid to allow himself to be happy, because he fears that he might lose interest in his mission, thus breaking the promise he made upon his parents' grave. He doesn't realize that his parents would have wished him to be happy.

My ideal Batman is a disturbed man, but not a disturbing one. He strikes fear into the hearts of criminals, for they are a superstitious and cowardly lot. His friends and family know better. He is many things, and different things to different people, but he is, above all, a hero.

bravo my friend, I agree, that is my Ideal Batman too. this one's for you, I made it with my Intuos3 tablet and Painter.

My ideal Batman uses the same costume to strike fear in crimminal minds to inspire wonder and trust in the minds of children.

Beautiful essay. You've got it.